RECORD OF THE DAY: THE DAMNED - MACHINE GUN ETIQUETTE


Let's see if I can keep this up: every day I will post a Record Of The Day, with hopefully a link to the full album in question. Some of these recordings will be obscure, some blatantly obvious. I guess this is born from an activity related to my work, in which I attempt to plug a record I'm pushing in the shop, though let me say this once: this blog is not related to the shop in any way, and nor will these posts be.

40 years on from the year 1977, and for me it looks like The Damned, and possibly the Buzzcocks, come out the winners. My love for Never Mind The Bollocks not withstanding, both The Damned and the Buzzcocks managed to rip out three absolutely amazing and wildly different full-length recordings during 1977/1978/1979 which still hold up today. Let's talk The Damned. The debut is indisputable. Rough, raw, shambolic, funny, unrelentingly high-energy: it was everything punk rock promised. The follow-up is still under dispute, and for that I can't fathom a reason. Produced by Pink Floyd's Nick Mason - they wanted Syd Barrett - when the band was in turmoil, it has long been considered a dog, badly produced and lacking inspiration, and whoever's been pushing that barrow for nigh on four decades now is clearly WRONG. The production is cleaner than the debut, but not to any point where it suffers. It's simply crisper, but it still has punch, and the material is there in spades. If you've been avoiding it for years due to bad press, more's the pity.

1979's Machine Gun Etiquette was seen as their comeback disc, but since I've just stated that thier sophomore effort was of no shame, let's just say it's the third classic in a row. Brian James was out, Captain Sensible was moved to guitar and ex-Saints and future Tank (what a pedigree!) bassist Algy Ward hit the four-strings. Punk/rock/pop/psych - it's all here. It's rambling, messy, raw and inspired, jumping from slop-pop ('Smash It Up', "I Just Can't Be Happy Today') to a raucous MC5 cover ('Looking At You') to high-energy PUNK (the 1-2 punch of 'Love Song' and the title track) to more psychedelic excursions they would pursue further with The Black Album, there is not a second wasted on Machine Gun Etiquette. Fuck. More than the Pistols or The fucking Clash, The Damned were the English band who influenced US hardcore the most. The Damned were one hell of a fucking band. Amen.
Posted by Dave at 5:18 PM 2 comments: Links to this post

It's a pleasure for the world of music to throw you a curveball and have you scrambling for the least-expected things. Lately, for me, it's been what I would call 'tropical-psychedelic-era CHARLES LLOYD'. I'm as surprised as you are. Or maybe you have no idea of what I speak, so a quick introduction.

I have a number of Charles Lloyd CDs on the ECM label. I distributed and managed the label down here for a number of years, as you may or may not know (or care), and am very familiar with its catalogue. Lloyd has quite a few albums on the label, which he has been on since the beginning of the 1980s. The albums in question are 'OK', but I rarely ever play them (I didn't pay for them), as I find them to be fairly non-remarkable hard-bop discs with occasional avant flourishes which, by no means bad, don't spark my interest a great deal. But still they sit on the shelf, awaiting the beckoning.

My workmate is - god, as much as it pains me to say this - a bit of a boffin on the world of 'soul-jazz', that curious sub-genre which developed in the late '60s and was/is basically a concoction made up of jazz, soul, pop and occasionally dollops of psychedelia. It's a broad brush, but regardless, many old jazzheads from the day went down that route for a few years, some basically for commercial reasons (many old and stodgy jazz fans banishing them as sell-outs for doing so), and the results varied. Cannonball Adderley's albums from this period (particularly his David Axelrod-produced ones) are simply excellent - you must hear Zodiac - but this piece isn't about soul-jazz per se, as that requires a book, not a blog post, so let's talk about Charles Lloyd's contributions to this loose genre.

So, my workmate thrust a copy of Lloyd's Moon Man LP from 1970 in front of my face about a month ago and said, You heard this? I told him I knew nothing of it, only that Lloyd recorded various hippie-ish jazz albums in the '60s (he ingratiated himself heavily with the west coast long-hair scene, although he was born in Memphis in 1938) and then recorded heavily for the ECM label later on. I was told I must hear it. I did. You must hear it, too. An ear-melting blend of goofy spoken-word material, almost country-style boogie-rock, spiritual jazz and rambling psychedelia, I now - a month or so later - rate it as a lost gem waiting to be rediscovered. As are his other LPs from the early '70s.

Curiously, Lloyd also played sax for the Beach Boys during this period - the band's best period, might I add - and various members of the band helped him out on two other crucial records from this era: 1971's Warm Waters and 1972's Waves. The greatness of these two albums - or maybe it's just ME: the reviews remain lukewarm to this day - are something I would like you to familiarise yourself with. Both featuring the likes of Al Jardine, Mike Love, Carl and Brian Wilson - you know, the Beach fuckin' Boys - they are a truly weird and beautiful mixture of cosmic jazz, sweet harmonies and tropical vibes. They have the distinct smell of marketplace failure all over them, too, but that just adds a sweet twist to the story. They come from a lost time when labels just threw money at this kind of strange nonsense in the hope that it would catch on with The Kids. It clearly didn't.

And then there is 1973's Geeta to consider - and you should consider it. With Lloyd on sax and flute with a three-piece band consisting of guitar, bass and dholak (South Asian hand-drum, like the tabla), as well as sitar and cosmic vocals,  it sees Lloyd, like many of his contemporaries, getting all mystical in an almost Don Cherry-like way (an apt musical comparison, alongside Miles' Big Fun juggernaut). Am I partying in the wrong circles? Why is there no Charles Lloyd box set documenting this period? Why have I not heard the utterance, I'm really into early '70s Charles Lloyd right now. Well, you just did! Get on it.

Posted by Dave at 3:16 AM No comments: Links to this post 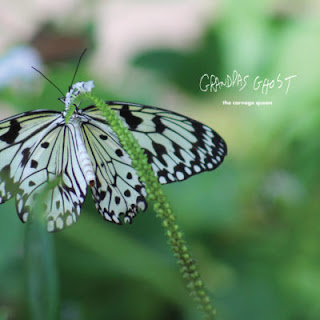 Posted by Dave at 6:51 PM No comments: Links to this post
Newer Posts Older Posts Home
Subscribe to: Posts (Atom)