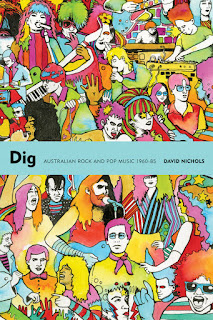 Here's what I done over my summer break: I slogged my way through David Nichols' new epic tome, Dig: Australian Rock And Pop Music 1960 - 85 (Verse Chorus Press). 'Slog' may have you thinking I didn't enjoy the experience, and to that I say, au contraire! T'was a book I enjoyed immensely; but it's also a book which requires some dedication, being nearly 600 pages of small print which will chew up a number of hours and days (and weeks, in my case) as you consume all the information within.

Some background: David Nichols is a fairly well known musician/writer/raconteur both Down Under and abroad. He was a staff writer for Smash Hits(!) magazine down here for over a decade (my first exposure to his writing was via a live PiL review in 1984), also published the excellent Distant Violins fanzine throughout much of this period, played in the Cannanes and other outfits, published a major book on the Go-Betweens a number of years ago, now teaches at Melbourne University, etc., etc. And yes, he is someone I also happen to know, and we often find ourselves at the same social gatherings and BBQs in the area, due to mutual friends. Now that all that is out of the way, let's begin with Dig, a book which apparently took him a decade to complete, and given the sheer amount of information it contains, such a fact is surely understandable. I find Nichols a fascinating writer (and human being, if truth be told) because he has no sense of snobbery or real delineation between the hip and underground and the popular and tacky. He will find the good in Wa Wa Nee and Pseudo Echo just as he will in the Fungus Brains and Laughing Clowns. Which isn't to say that he possesses no critical faculties in discerning good music from bad, it's just that he doesn't possess the same innate sense of indie-retentive snobbery which, well, I have. And it's this broad appreciation which can lead up him some interesting (and perhaps dangerous) musical paths.

The book itself, as the title suggests, is a history of Australian popular music over a 25-year period, and Nichols is at pains to point out in the introduction that his assessment of things - both in his critical assessment of the music and what he chooses to cover and ignore - is purely subjective, as indeed all histories are. The coverage is still broad and sweeping, and pulls no punches in some regards. A sacred cow such as Johnny O'Keefe is shot down in flames rather quickly, dismissed as a hack and horrible human being to boot (he was both); INXS are frequently derided for their dull music and shameless aspirations (can't disagree there!); though I do have a major beef with David's rude dismissal of AC/DC's Back In Black (he loathes it; I certainly don't). Some of the major players in Australian pop and rock, such as the Bee Gees, Molly Meldrum, Lobby Loyde, Ross Wilson and even Johnny Young get a lot of pages covering their contributions, and love 'em or hate 'em, they have all played a major part in shaping Australian music, and Nichols isn't afraid to see the good and bad in what they have all contributed. In short, it's refreshing to read a book on such a subject which doesn't appear to have an agenda in regards to either fawning over the gods or dismissing them for controversy's sake.

There is simply way too much music covered within to go into detail here - that's what the book's for. You get pre-Beatles '60s pop through to the Easybeats, Zoot, Masters Apprentices (whom I would've liked to have seen more on, especially their peak early '70s phase - but that's me being subjective), Pip Proud, Aztecs and the whole Sunbury scene, the rise and raise (then fall) of two of the biggest bands of the '70s, Daddy Cool and Skyhooks (and both of their stories are fascinating, even though I don't rate their music), Saints/Radio Birdman, Rose Tattoo and X, Go-Betweens and Triffids (two highly-praised bands - by everyone! - whom I just can't get a grip on), the Carlton scene of the mid/late '70s, The Models (another band whose highly-worshipped early recordings totally leave me cold - perhaps you had to be there) and more, more, more.

My favourite parts in the book - perhaps because their histories/stories were largely unknown to me and have since garnered in me quite a belated and curious fandom - would be the extensive coverage of the Carlton scene of the late '70s, particularly that of The Sports, as well as En Zed ex-pats, Dragon. Yes, you heard me right. The Sports' first two albums, 1978's Reckless and 1979's Don't Throw Stones, are magnificent collections of New Wave/pub rock/power pop anthems, skewered by sharp writing, a great frontman (yup, that's Stephen Cummings) and a raw, powerful delivery. I had always dismissed such outfits as unbelievably naff - a half-arsed compromise between what punk should have been and shameless pop ambition - but when put into context (the context that such players had been around the scene creating all kinds of radical and interesting music for a number of years before punk hit), their high-energy, urban brand of hook-filled non-hippie pop/rock makes sense. My pal David Laing (yeah, that guy) has reissued very nice 2CD editions of those two albums with a ton of great bonus material, and I urge all and sundry to give them an earload.

Dragon is a band which David Nichols has long had a fondness for, and hence he gives them a lot of coverage in Dig, just about more than any other band. Dave Graney writes an interesting introduction to Dig, and he makes a great point, one he borrows from an unnamed friend of his (that person happens to be J**** W***s, an old workmate and good friend of mine), which is this: every great music book must have the author championing at least one artist/band which has you scratching your head, furrowing your brow and saying to yourself, REALLY??!! Them?! I think that is a good litmus test for a great music book. Of course, David Nichols champions a whole number of bands here to varying degrees for whom I either can't stand or have no interest in (Cold Chisel, Reels, Australian Crawl, Sherbet), but his cheering for the recorded works of Dragon had me curious, particularly because I'd become aware of their mid '70s NZ days when they were a prog band who recorded two very rare (and highly desirable) albums for the famed Vertigo label: 1974's Universal Radio and '75's Scented Gardens For The Blind. Both are on Spotify, and the former has been reissued nicely (with David Nichols liner notes, natch) by the Aztec label, and hopefully the second will get a similar treatment one day (I should hassle Gil). I have, over the course of the last few months, upon reading this book I immersed myself in these two LPs repeatedly, become a huge fan of these two albums, although I should warn you that if you're allergic to 'prog' and all its extended-song/Hammond-organ glory, then these recordings are not for you. But for myself, there is something very special about these albums, being nascent yet highly sophisticated - with great songs! - recordings from a young band stationed at the arse end of the world in the mid '70s. Of course, the band soon moved to Australia and became a very successful pop/rock act with a number of huge hits (overseas types will surely know 'April Sun In Cuba', a big AOR hit around the world), although the band's history is more perverse and twisted than the average punk band. Firstly, the group had a long-running fascination with the music of Lou Reed and the Velvets, and covered 'White Light/White Heat' in their live set for decades; singer Marc Hunter was a punk enthusiast and can be seen in the book wearing a Residents t-shirt in 1978 whilst wrestling a woman on stage; the band actually kicked Marc out of the band between the years 1979 - '82 for being an insufferable shitbag and drug fiend, though members, including Dragon leader Todd Hunter (yes, his brother), contributed to Marc's solo recordings during this period; the band were voracious drug users (and, in some cases, dealers) and were named in a government enquiry into drug abuse in NSW; and hey, they did write a number of great pop songs - that is something I will not deny.

So, in fear of turning this review into a book of its own, it should be stated that Dig is never a boring read. Nichols covers music I love, loathe and am frequently indifferent to, but never is it a dull to read about such topics. As he is in person, his writing is as dry as the desert sun, with deadpan witticisms scattered throughout. The cultural background and context to what is covered gives the reader a great insight into why the music turned out as it did (there is much to be said for the fact that, at least in the '60s and '70s, the vast bulk of notable music eminating from Australia was in fact made by migrants) and what life was like at the time for a music fan: the press, the radio, the concerts et al. I have a number of bones to pick with David regarding Dig next time I see him, and that is a sign of a good book for me. If you're reading this blog - and I do believe you're reading it right now - then this is a book which will interest you.

Hey folks. Sorry I've been slack around here. Real Life and others things have taken precedence. I've also set up a new laff-out-loud blog, DONALD TRUMP RECORD REVIEWS, which is also a Tumblr site. Today, the non-laughs are on me! More things to come...
Posted by Dave at 3:49 PM 1 comment: Links to this post
Newer Posts Older Posts Home
Subscribe to: Posts (Atom)