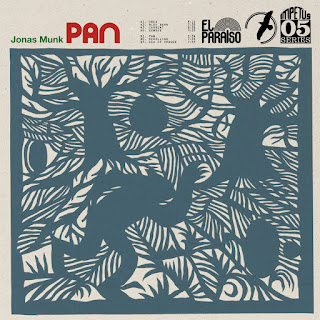 I do love a label with a strong sense of graphic design, one where the releases feel like chapters in a book, telling a story with the music and associated visuals. There are obvious examples - ECM and Blue Note certainly spring to mind - as well as Tzadik and the Rune Grammofon label from Norway, although I feel that their releases starting flying way off the mark musically roughly half a decade ago. One such label, which I've only very recently become aware of, is the El Paraiso imprint from Denmark. 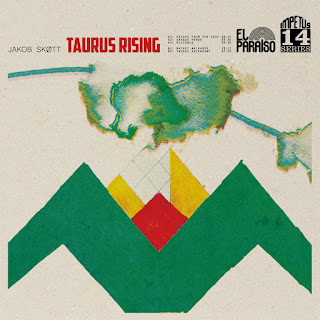 Owned and operated by musicians Jakob Skott and Jonas Munk, both of whom have solo LPs on the label and who are both members of the band Causa Sui, it's got a small but estimable catalogue of artists (all seemingly friends or inter-related through bands) who cut a wide musical path - stoner rock, psychedelia, folk, jazz, electronica - but all seem to be headed in the same vague direction of, dare I say, transcendent sounds. Headline act, Causa Sui, a four-piece rock outfit, often get lumped within the 'stoner rock' scene, although the music they create is often more eclectic and engaging than most acts I associate w/ the genre. Sure, there are recycled/regenerated '70s 'Sabbath riffs a-plenty, but the music, which includes kosmiche keyboards and sometimes sax, also lends an air of Soft Machine before they went off the rails, or the dynamic complexities and riff-making of early Mahavishnu. Apparently mostly improvised, they can make long song engaging, and the shorter ones sharp and to the point. You might want to try their Pewt'r Sessions or Summer Sessions series: they make for epic, enjoyable slogs, and the guitar/keyboard textures - did I mention that they are purely instrumental? - put them in the vein of Ten East and Yawning Man (two bands I plundered money and time into many moons ago), and while I'm on a roll, I'll throw this in: had they hailed from the US of A in the late '80s, they woulda fitted like a goddamn glove in the SST regime of the day. 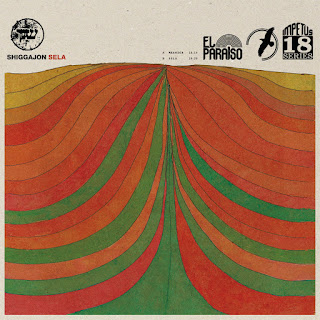 Jonas Munk's Pan LP from 2012 is one to investigate. Guitars are mostly forsaken for driving electronics. There are obvious precedents for the sounds within: Manuel Gottsching, maybe even some of Steve Hillage's recordings. The interplay between the mechanical electronics and the fluid, organic guitar playing is what makes it work. It doesn't rewrite the songbook of 21st century music as we know it, but one demanding as such is asking for too much. Jakob Skott's solo ventures are also something to investigate, and there's two of them: Amor Fati and Taurus Rising, both of which display a heavy kraut damage on their sound, although they aim for a percussive, rhythmic bent and eschew ambience, for the most part. We're talking morotik beats occassionally interrupted by outbreaks of bombast, and they are records I will put my name to. 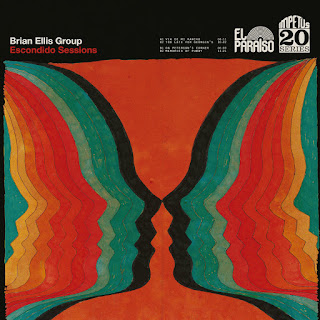 The Brian Ellis Group's Escondido Sessions LP was released quite recently, and is my pick of the bunch. And again, it goes to show that El Paraiso doesn't necessarily follow a given musical formula. Ellis is a Californian whose musical CV involves various psych-jam outfits, although his quartet takes its influences from the music of '70s Miles Davis and the early (and crucial) Tony Williams Lifetime recordings, which means that this disc is white-hot and not merely a regurgitation of Ellis' record collection. There's four exploratory jams here which meld the sounds of Miles, Williams, pre-vom Zappa and Soft Machine w/ Wyatt in tow (before they also crawled up their own backsides), which may spell prog-fusion to you, but to moi spells fun times. And indeed it is. The cover perfectly apes the sounds you may expect: it looks like a Limey jazz-rock album from the early '70s, or some obscuro fusion disc from a time before the genre blew, and that's what it sounds like, too. One of my fave discs of '15. Ellis has also recently released a a duo guitar recording with Brian Grainger, a quieter affair which sees them delving into a Brit-folk realm (think of Jansch/Renbourn, of course) on the El Paraiso imprint - At Dusk be its name - and it's also worth the time and trouble. 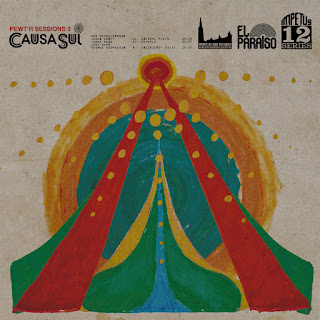 Oh, there's also the Danish collective known as Shiggajon, whose Sela LP floats my boat in serious ways. They claim influence from the likes of Don Cherry and Alice Coltrane, and I'd say there's a heavy tip to the former there (esp. his early '70s Swedish gonzo period), and while they don't reach the spiritual plains of either (who possibly could?), possibly due to the whiteness of its sound (sorry, but it's true), there's an improv/hippie vibe here I dig a lot. I'd put 'em more in the bracket of The Necks or the communal-jam vibe of Amon Duul more than the spiritual jazz aura to which they aspire, but that's an OK place to be, too. Ya dig?

All of these albums can be sampled at the El Paraiso web site, and for the record: I am not on a retainer from the label. I simply share because I care. I have but scraped the top of the barrel here. There is more to investigate under the EP roof - these are simply the highlights. This is great music in the here and now. Over, out.
Posted by Dave at 5:54 PM 1 comment: Links to this post

Sometimes even the greatest marketplace failures enjoy a second life. The sole LP from LA's Stains, released on the SST label, has never fully enjoyed the life of a full revival and reappraisal, but it should. Some label such as, say, Superior Viaduct or Southern Lord (who have done a good job w/ Bl'ast!'s catalogue) should get on the case, but then again, you'd have the iron will and ninja legal team of Greg Ginn to contend with, and one would probably get nowhere fast.

The band's roots go all the way back to 1976, though the one album they recorded - all 21 minutes of it - didn't see release until 1983, two years after it was recorded. Look up any old LA flyer ca. 1980 - '83 and you'll undoubtedly see their name pop up. They played w/ all the greats and not-so-greats, and from all reports were a scorching live act. Circa 1983, SST was getting all 'heavy', digging into the worlds of '70s hard rock and metal with the likes of Overkill (their debut 7" from '82 is actually pretty straight 'punk', though once Merrill Ward took over on vocals they became worshippers at the altar of Lemmy), Wurm (Dukowski's pre- and then post-Black Flag outfit, who released a great 7" and equally great LP which deserve reappraisal [and reissue]), Saint Vitus and Black Flag themselves. SST made kind of a deal of the Stains' 'proto-crossover' fury and the metal angle, though to my ears it does them a disservice, nor does it accurately describe their music. I guess, for one, when I think 'crossover' I think hardcore mixed with speed/thrash metal with flashy riffs and double-kick drums (and I hated that shit), and the Stains didn't partake in such shenanigans. One spin below and you'll hear and rough and ready LA PUNK w/ some hot leads straight out of the Ginn handbook. Actually, the influence between guitarists Robert Becerra and Ginn went both ways.

Whatever. The album didn't set the world afire, and I remember seeing a secondhand copy of it for a ha'penny back in the late '80s - when I was knee-deep in my teen SST fixation - and I didn't buy the fucking thing! I think I suspected that it would be second-rate clobber of the SWA/DC3 variety and passed it up for an Always August 12" or something. Now it'll set you back a hundreds bucks or two, its reputation grown beyond the obvious. Wrangling rights out of the House Of Ginn to reissue such a thing, I imagine, would be more trouble than it's worth. You may just have to enjoy the Youtube link below for now.