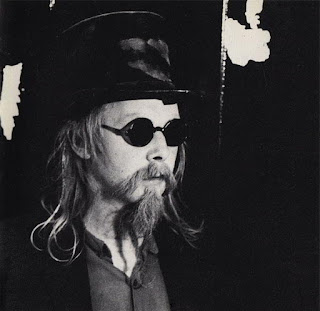 The pointless minutae of life can be, uh, fascinating. That's what this blog exists for. You want the big issues?? Forget about it. Life's tedium is documented here. For instance, let's belatedly talk about the NURSE WITH WOUND LIST (lookee here). This was brought up in discussion on a certain well-used social media platform just the other day - brought up by myself, in fact - and took a couple of entries before it succumbed to the kind of fiery debate you could only expect from seasoned music dorks with an axe to grind and nothing better to do w/ their lives.

I hadn't even thought about 'The List' for many years, but it had come up in conversation with a couple of friends lately, and there was one thing I observed. THERE'S NO SUN RA! How did that ever happen? How does a teenager from London become aware of, say, the Debris' LP (proto-punk glam-damaged rock/limited private-press monster/Screamers associations) or Sonny Sharrock or the Reverend Dwight Frizzell (whose 1976 LP was in an edition of 200 copies) the dozens of ridiculously obscure European art-rock outfits which litter the list, and yet Sun Ra - the great American avant-garde innovator of the second half of the 20th century - not get a guernsey? There were three trains of thought here contesting my befuddlement, none of them satisfactory...

1) Sun Ra was perhaps too obscure for Stapleton. I'll call a huge BS to this claim. Look at the esoteric nonsense on the list! Have I already mentioned Debris'? Yes. Lard Free? Check. Le Forte Four? Check. Supersister? Check. Sun Ra was on the cover of Rolling Stone in the early '70s. He and his Arkestra played throughout Europe and (I can only assume) the UK in the '70s. This argument doesn't hold any water. 2) Sun Ra was too obvious to list. A pox on this bogus line. Also in the NWW list is Frank Zappa, Kraftwerk and King Crimson. They all had Top 10 records. King Crimson were big news in the UK in the '70s. Kraftwerk charted high in the US with 'Autobahn'. Both the Velvet Underground and the Stooges also make the NWW grade. By 1979 they were already part of The Punk Canon, their stock raised to a new level. Their obviousness - or at least the obviousness of their greatness - was well known, even if that meant they still didn't have platinum LPs to line their walls. This argument is a crock. 3) Maybe Stapleton just didn't like Sun Ra. Maybe he didn't. In which case he had tin ears. Maybe he also didn't like Cecil Taylor, Albert Ayler, Art Ensemble and Don Cherry either - all of whom made brilliant avant-garde records - in which case he had ears made of shit.

Anyway, perhaps one day this mystery will be solved. I have nothing against Mr. Stapleton. Au contraire: I am still in possession of about a dozen and a half NWW albums to prove my point. This discussion has spurred me on to take them off my shelf for the first time in a long time for a re-spin. The very early albums really aren't all that good. A Chance Meeting..., the debut from 1979, is an amateurish collage/kraut collage mess which sounds like it was strictly the work of young people who had little idea of what they were doing (it was), but it's not without its charm. For my two cents, the albums I always return to are Soliliquay For Lilith from 1988, an epic 3LP/3CD ambient set designed for getting his daughter to sleep (hence the title), which to me is a great update on something like Tangerine Dream's Zeit (again, little happens in there, too, but it's a pleasant place to be); 1986's Spiral Insana, a mixed cut-ups of ambience and audio clutter which is a perfect combo of the two and is probably overall my fave NWW album; and especially his 'sell-out' records from the late '90s and thereabouts - 1996's Who Can I Turn To Stereo, 1999's An Awkward Pause and 2001's Funeral Music For Perez Prado. The 1st and 3rd were strangely viewed by some as pandering to the 'dance' crowd, though all I can hear w/ my tin ears are two terrific avant discs with rhythm, and An Awkward Pause is mostly straight-out Kraut-rock in a twisted Amon Duul 2/Ash Ra Tempel sense of the word. All three are quite excellent.

I haven't followed what SS and co. have been up to for a decade or more. You can see a pretty cool doco on the man here, which is him giving the viewer a guided tour of his abode in Ireland, where he has lived w/ his partner and children since the late '80s (and it's worth a look), and the Nurse With Wound List, a list derided by a good buddy of mine as 'the ultimate wankers' list', is still an item of great beauty, and must be placed firmly within the context of its time: it was the ramblings of an uber-nerd attempting to spread the gospel in the pre-internet times. It helped give such artists as the Hampton Grease Band and Agitation Free a second shelf life in the post-punk universe. It sparked a genre unto itself. What the hell have you done with your life? 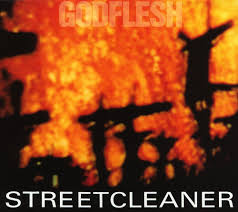 What's old is new again. I originally bought the Streetcleaner CD in 1990, as many did around that time. It came out the year previous, but it was a bit of a creeper, a slow-burn release which appealed greatly to a certain breed of music fan who missed the old Swans of yore, was enjoying the Melvins of the Ozma/Bullhead days (ie. the records the Melvins were releasing right about then), the then-current school of UK heaviness a la Head Of David, Terminal Cheesecake and the first couple of longplayers from Napalm Death and Carcass (both of which are fucking essential, whether you know it or not).

Having been through the HC wringer for a half-decade, being out of high school and actually having a disposable income of sorts due to warehouse/office jobs throughout breaks in higher learning, I was going off in a thousand different directions: grindcore, noise, hip-hop, AmRep sludge, Shimmy Disc, the last dying gasps of the SST empire (both Pell Mell and Slovenly still had something up their sleeves), NZ sounds, Touch & Go's then still fine output (Didjits, Killdozer, Slint) and more. Some of this stuff has aged like last week's bread, and some of it still lights a fire under yer backside in a most amenable manner.

And then there were Godflesh, then a trio formed by mainstay Justin Broadrick. As a young gent, Justin spent some time in a nascent Napalm Death, was briefly in Head Of David and has since enjoyed an unlikely career as some kind of Godfather Of Heaviness dabbling in all manner of projects (the first Jesu album, self-titled as it is, I covered in this blog about a decade ago, and for me it remains the finest thing he ever did - or at least the finest I've heard). Godflesh were the first band to really make his name a name, if you get my drift, and Streetcleaner made a major splash at the time and is now herladed by all and sundry as a 'classic'. Indeed it is.

After Streetcleaner, Godflesh kind of changed tact and veered off into a number of musical directions, none of them particularly good, I must say. I heard some of the post-Streetcleaner material at the time - I think my brother made an error of judgment and purchased a CD of theirs - and it was some variety of shitawful 'techno-metal' which had, as you'd expect, metal riffs intertwined w/ techno beats, and whilst that's obviously some people's idea of a good time, it ain't mine. In the late '90s they 'went back to their roots' a bit and even recorded an album or two with an acoustic drummer (can I recall these album's names? No), and I recall them being kind of listenable. Perhaps. Anyway, I speak of the debut...

I sold my CD copy some time in the '90s, and, as can sometimes be the case, found myself repurchasing a special 2CD remastered edition a couple of years back, which contains a fancy foldout digipak sleeve with a ton of liner notes, and a bonus live/demos CD which I think I might have listened to once or twice. I find myself enjoying the album a lot more now than I did a quarter of a century ago. I recall that, as a young man, I would play the first two or three songs, get bored by the middle of the album and skip to the bonus EP at the end, their self-titled four-songer from 1988, which is slightly rawer than the album (still w/ a drum machine) and contains four impeccable tracks: 'Tiny Tears', 'Wound', 'Dead Head' and 'Suction' (Youtube and ye shall find). All of those songs are worth hearing. In fact, if you only hear four Godflesh songs in this lifetime, make them those. But what's also worth spinning, now as I stroke my paunch in middle age, is the rest of Streetcleaner. That middle section of the album - tracks like 'Dream Long Dead', 'Head Dirt'... whoah, dude! - sound much less meandering than they did in my impetuous youth - almost composed, and fitting to make Streetcleaner a goddamn album to be reckoned with.

Nearly everything which makes up the album - the dark lyrical matter focussed on decay and death, pounding drum-machine rhythms, downtuned guitars and barked vocals - became a bad cliche almost upon release; lord knows, Australia suffered a small outbreak of similar bands in the first half of the '90s, and they were tough times, but as an album, Streetcleaner works and delivers as promised. You could say it's strictly a perfunctory album of 'heaviness' - I play this loud in the car when I want a dose of badassness as I'm going to pick up the kids from school or whatever - but it's got more depth than that. Hell, I'm all grown up now, and Godflesh's Streetcleaner sounds A-OK to these ears.
Posted by Dave at 4:55 AM 3 comments:
Newer Posts Older Posts Home
Subscribe to: Posts (Atom)