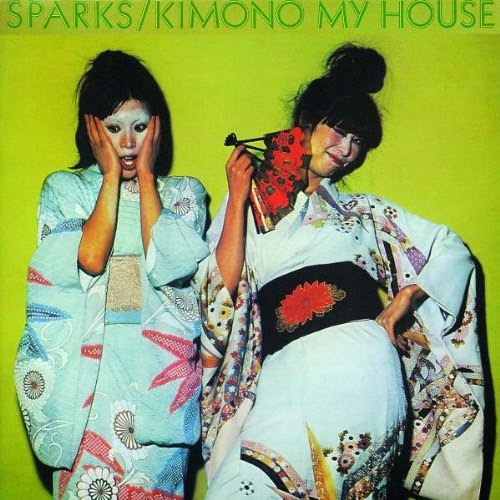 An ever-so-brief interlude... the music the brothers Mael - Ron and Russell - AKA Sparks, made betwixt the years 1971 - 1975 has kept the thunder out of my head the past 18 months. It's become quite an obsession, and I know I need to delve further. Operatic, schizophrenic, multi-facted glamoid circus music. It's a small wonder they were so big at the time, since their take on 'rock' is a skewed one indeed, but one perfectly suited for a Brit audience of the day (being LA-based Anglophiles as they were, eschewing the granola and brown shoes styles of their Angelino compadres). I actually thought Sparks were English, but that was apparently a common misconception and one the band were only too happy to encourage.

Their music was a sweet spot for smart rock folks in the mid '70s when it seemed like the genre itself might be going down the toilet. I can't help but note, as an aside which may be painful for some, their obvious influence on a young Jello Biafra. Mr. Boucher has noted many times over the years his teenage obsession w/ Sparks, and one spin of the likes of Kimono My House/Propaganda/Indiscreet albums and their frenetic, cartoonish tunes a-plenty, and you can hear the blueprint for the likes of Fresh Fruit.../Plast Surgery Disasters therein. Deal with it. Deal with Sparks. I certainly have been.
I have written here before of my first encounter w/ them as a teen, watching the fantastic B-flick, Roller Coaster, where the band rips out a destructive version of 'Big Boys' (from '76's Big Beat LP, a full-lengther produced by Rupert 'Pina Colada' Holmes!) in front of a crowd of dorks in a theme park.


Sparks actually toured Down Under approx. half a decade ago, to the wild delight of nearly zero people, which is a pity. I didn't even attend. I found it a curious spectacle that they would make the effort, and was well aware of the band's place in the grand scheme of things and their hep resurrection c/o In The Red Records, but I didn't feel like forking out the coins and passed. Few others did, although the shows were apparently fantastic. So be it. The Sparks revival has began in my abode 18 months back, and it's still going strong. More in the future...

Have you read Talent Is An Asset by Daryl Easlea? It's a pretty good read. Still mourning the loss of the Angst In My Pants era live footage from SNL with Devito introducing them from youtube...

I caught the "Big Beat" gig during their string of gigs in London in '08 - wherein they played each of their 21 albums live, in succession. It was phenomenal. And with Steve McDonald (REDD KROSS) and a couple ROLLINS BAND guys backing the bros Mael. Sooo much fun.