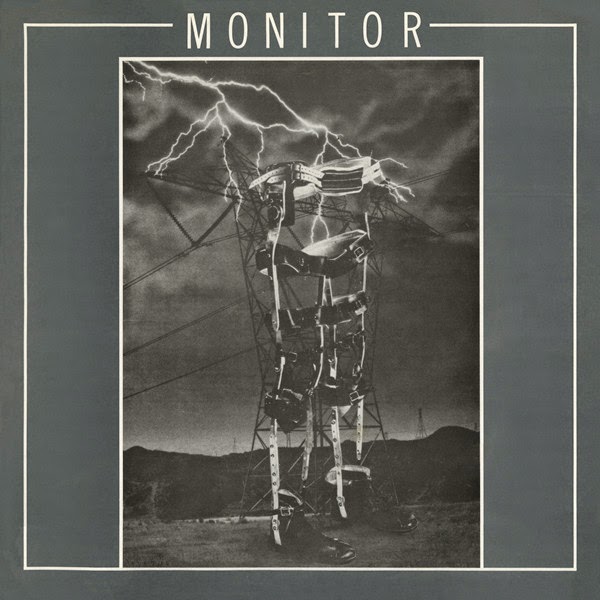 Let's take a brief skip through another Superior Viaduct art-punk/dark-wave/whatever release from the past couple of years. This ain't the first word nor the last on this one: just my word, which likely counts for zip outside of this blog. The quartet known as Monitor is one which has orbited my brain for well over 25 years - you'd read about 'em in Flipside, Hardcore California, LAFMS-related shenanigans and their links to the Meat Puppets, but you couldn't find their sole self-titled LP for love nor money Down Under. In keeping w/ SV's resurrecting-the-dead activities, their LP from 1980/'81 is one well worth wrapping your ears around.

Linked up w/ the LA-based art collective known as World Imitation Enterprises, Monitor had been on the scene, creating 'happenings' and performance-art gonzoid goings-on since the late '70s, skirting the peripheries of the very happening Los Angeles punk scene (a fantastic magnet for art weirdos citywide), claiming brother/sisterhood w/ the likes of Nervous Gender, B People and Boyd Rice, yet somewhat existing in their own universe. They also apparently shared management w/ the Meat Puppets, which is where their associations sprung from (more on that soon). All of this is terribly interesting - it really is - because for me, as you well fucking know, the LA underground scene of the late '70s/early '80s holds a perpetual fascination. But all of this context for Monitor's existence probably wouldn't amount to a hill of beans if their one, solitary LP wasn't worth more than a cursory spin and a quick filing in the collection, only to be bared and exhibited when hep friends come to visit. Such is not the case.

The group emitted a mighty listenable and tasty stew of minimal, slightly No Wave-ish tribal rock - jagged keyboards and thumping toms - which surprisingly never goes off the deep end into Art Heck, but instead is fairly melodic and song-based. They woulda fallen off their collective chair at the time had the comparison come up in print, but a bunch of this reminds me of Pink Floyd ca. More/Umma Gumma, and I would contend that that's not a bad thing. In the spirit of the times, however, there's too much existential dread of display here for Monitor to be mistaken for hippies, and had this been released on Rough Trade at the time, interspersed with slightly similar outings from the likes of the Raincoats and Scritti Politti (when they were dreadlocked agit-rockers), it might have found its place. Closer to home, I'd also file 'em next to Savage Republic, minus the Arabic flirtations. 'Pavillion' is one of the best tracks, and a good representation of their sound. The Meat Puppets actually contribute a number here, 'Hair', and it must be heard to be believed. Apparently Monitor let the band contribute the song in question as a gesture that they themselves couldn't reach the dizzying heights (and pace) of the brothers Kirkwood, but for some reason felt it needed to be slotted amongst Monitor's more mannered drones. 'Hair' is a total anomaly on Monitor, but it's a good one. At this stage, the Pups were an absolutely ferocious power-trio who could even the most boneheaded HC outfit a run for their money, but of course, you've heard their 7" EP from the time. I have spun Monitor a lot the past 12 months: it is so much more than a mere curio item. Get it. As for what its members are up to now, I'd like that question answered, please.