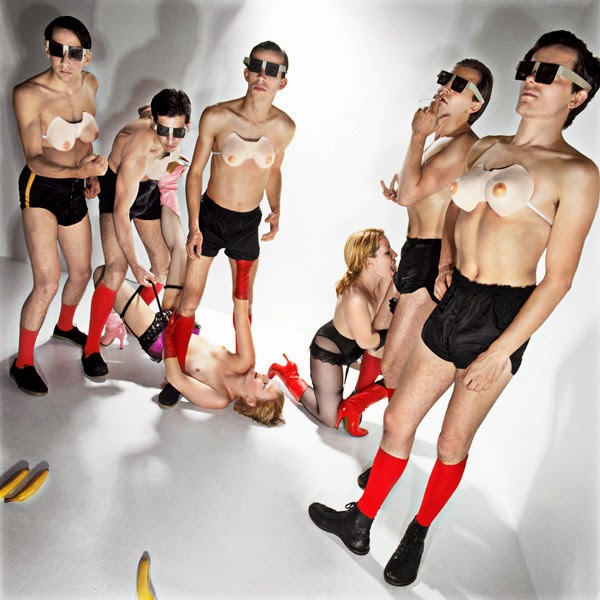 Let's make it brief and get this embarrassment out of the way. This 2CD set, now on the extremely estimable Superior Viaduct label (who here hasn't burst a blood vessel over their release schedule these past 24 months?), has been around in one form or another for nearly quarter of a century. I recall seeing ads for it in, err, Option magazine some time around the very dawn of the 1990s. I didn't pay any attention. Devo?! Why the hell would I care about those New Wavers? I actually owned the first two Devo albums on the compact disc format back in the 1990s: the editions released on Hank Rollins' Infinite Zero label. He had a good thing going there, and I figured that his stamp of approval meant something, even though at that time he was releasing the worst music of his career. Anyway, I played them a handful of times, got absolutely nothing out of the experience and traded them in about 6 months later. Thrilling, huh? This is why I do a blog: to regal you with such stories.

Skip to late last year. I look after Superior Viaduct's distribution Down Under - a job which is not as exciting as it sounds - but it has its benefits. Out of curiosity, since every fucking human being I hold dear to me has forever told me that early Devo is the duck's nuts, I asked the label for a freebie of the Hardcore Devo 2CD (it can also be attained as two separate vinyl volumes, one a single LP, one a double) in the next order and, upon receiving it have been eating all prior words I said about the band for the last 30-odd years of my life. Chowing down like a humiliated man possessed. Humble pie every fucking day, weeping quietly to myself, sobbing about what a fool I've been. I even re-bought the first two albums (and I like 'em, a lot).

But really what you need - what you probably already have - is Hardcore Devo, which contains all of the band's pre-major label recordings from 1974 - 1977 (basically the infamous demos which David Bowie and Iggy Pop pulled their collective dicks over), when they were but a group of basement-bound spuds from Akron, Ohio, writing and recording a slab of original (and boy, it is original) material on 4-track, hoping the world would one day share their vision. To say that the sounds of these recordings have blown my fucking mind the past year would be an understatement. I have had my head in the sand and up my arse: this is the most visionary 1970s rock & roll - completely out of lockstep with the rest of society - the US of A spat out during this era this side of Pere Ubu, Half Japanese, the Screamers and the Residents. They do not sit to the side of any of those bands: they sit among them. Some folks say they sit above them, but I'm not here to split hairs.

At this stage of the game, Devo were propogating a gonzoid form of post-hippie noise which blended elements of jagged Beefheart rhythms, an absurdist, Sparksian theatricality, the smarmy art-rock of Roxy Music and the wise-ass humour of Zappa before he got too annoying. And so much more. There's THREE ALBUMS worth of material here - two hours - and it's all good. Most bands have a tough time writing three great songs in their lifetime: Devo wrote and recorded three albums worth of all-killer/no-filler tuneage for their own amusement in the cultural wasteland of midwestern USA in the mid '70s, and 40 years later it still sounds better than nearly everything released since. I have listened to these recordings nearly every single day for 12 months - I should know what I'm talking about, even if I'm the last guy to be talking about it.

I'm told that the SV edition is the best-sounding version there's ever been of this set, much clearer and punchier than the old Rykodisc edition. I can't make comparisons, but I can say that, for a group of semi-impoverished outcasts recording in their basement on very basic equipment, Hardcore Devo sounds amazingly good. Every riff, quirk and minutae is captured on tape - it's 'lo-fi', sure, but given a Jim Steinman gloss, it wouldn't sound any better.

What the fuck. Stop reading this and start listening. No sound links here; you do the homework. I apologise for being over two decades late to the party.

I prefer that Visiting Kids EP from '90, but hey to each his own