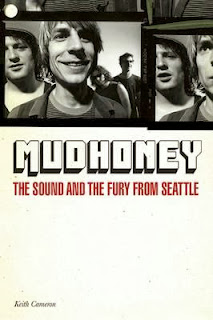 I've mostly steered clear of musical biographies the past decade. I'd rather listen to a band/artist/blowhard's music - assuming their music is actually worth listening to - than read about their life story. There are, of course, exceptions, but there are always exceptions. There are two things which have come to light the past four or so months of my life: A) I've been doing a lot of reading; and B) I have come to accept the fact that I am a rocker - always have been, always will be. Regarding the former: I don't watch TV, rarely watch movies these days (I have neither the time nor inclination at this point in time), and have had to take to a lot of public transport for work. That means a steady devouring of pages which encompass brows both high and low (from Iain Banks to trashy zombie-apocalypse thrillers), and in between I managed to make my way through this Mudhoney biography, given to me by a friend who works for the publishing company (which means he got it for free, the cheapskate).

I was about to take on the book at hand, but then I realised in my ramble that I hadn't even covered point (B) yet: I am a rocker. Oh yes, I am. That is, I have rediscovered and embraced my love for testicles-to-the-ceiling RAW ROCK & ROLL of a myriad stripes, and it has been my steady diet the past third of 2013. And that's meant Cheater Slicks, Hoss, AC/DC, Bored!, Hawkwind, Black Sabbath, Splatterheads, Motorhead, Replacements, King Crimson, Wipers, Discharge, etc. Sure, in between there's been bouts of ECM jazz, Steely Dan, Los Lobos, 10CC, Ry Cooder and Factory Records 12" comps - absolute nancy-boy maximum in extremis sonics - but that's coz I like to mix it up. And then there's Mudhoney. I've been spinning them an awful lot, too. Going to see them live next month, in fact: first time in 24 years. I gave the band a bit of an evaluation in the early days of this blog, mostly in relation to their rather excellent Since We Became Translucent 'comeback' disc of 2002 (they did come back, and they did it well: that's probably my fave full-lengther of theirs), and in my assessment I noted that the band were one whom I mostly ignored throughout the 1990s, or at least post-1991 or so. 'Grunge' had been and gone before it even hit the malls, and I just wasn't that interested. I didn't storm off in a huff - I just didn't pay any attention.

And in some sort of irrelevant, roundabout way, that brings me to Keith Cameron's Mudhoney: The Sound And The Fury From Seattle. Englishman Cameron is a rare breed indeed: an English music writer I don't wish to kill. No, really, he's good. I recall his words from old issues of MOJO magazine. In fact, I was in touch w/ him many moons ago and he used to give F/i great write-ups at the time. That aside, he knows his topic well, understands 'rock' and makes the story of Mudhoney an enjoyable and informative page-turner. The story of Mudhoney is, after all, an interesting one which brings together many threads of post-1980 American underground rock.

The roots of the band lie within the heart, soul and loins of a young Mark McLaughlin, AKA Mark Arm. Originally a hesher and FM-rock suburbanite digging the sounds of Rush, Aerosmith and the turgid muck of REO Speedwagon, Foreigner, et al, he had his head switched onto the New Wave and eventually punk rock then HC via a fairly typical Devo-cum-Stooges-cum-Black Flag series of epiphanies. He then went onto form the notorious Mr. Epp & The Calculations, a nyuk-nyuk HC-but-not-HC joke band in a vaguely Flipper/No Trend mold, before getting a little more serious in the pre-grunge 'supergroup' (only posthumously so) Green River, a band considered to be one of the great precursors to somethingorother, and also an outfit I always found to be remarkably unremarkable in every single way. I recall buying their Dry As A Bone 12" EP when I was but 16, and I traded it in a few months later. They were a strange beast, a meeting point twixt punk and '70s hard rock/metal, and not a particularly successful one at that - both aesthetically and commercially. I don't mean to rag on Green River - I've heard much worse excuses for rock bands in this life - and at the very least Cameron's book gives them a great deal of context and explains the band's sound and how it came about. It was that post-hey-day-of-HC period when punkers in a post-My War universe started digging the sounds of Master Of Reality and Toys In The Attic (the kinds of records they ditched after hearing Never Mind The Bollocks) all over again, and fused these sounds w/ the punk-noise they'd been digesting from the likes of the Meat Puppets, Black Flag, Buttholes, Void, Tales Of Terror, etc.

The story of Green River is an interesting one - and it's given considerable and worthy space in the book in question - because a failed band produced two highly successful but different outfits: Pearl Jam and Mudhoney. Oh, there's also Mother Love Bone in there, but they failed, too. Sure, Green River released discs on Sub Pop and Homestead at the time, but they couldn't draw much of a crowd outside of their home state and had they not spawned two big bands from their implosion, you'd probably rank 'em as a footnote in '80s u/ground rock on an equal footing with... oh, I don't know... Blood Circus or SWA? The music of Pearl Jam has always meant zip to me - there's way too much cheese in there for me to digest - but the book at least had me liking them as human beings. Sure, Stone Gossard comes across like an uptight putz, although Green River/Pearl Jam's Jeff Ament has a surprisingly solid background in HC and underground rock, and Cameron and Mudhoney themselves make an interesting point and distinction: they toured once with a successful Nirvana and were treated like a bunch of lepers, though every time they hit the road w/ Pearl Jam (and I was surprised to read that it's been a number of times), they get treated like kings by their more successful cousins and their roadcrew. Mark Arm also points out Kurt Cobain's bitching at Pearl Jam when both were competing for the grand slam title of being the Reigning King(s) Of Grunge: Cobain rightly derided PJ's mersh factor, although as Mark Arm points out, Jeff Ament had a much more solid grounding in undergound rock than the relative neophyte Cobain. Whatever! It's old news now, the Grunge Wars have been fought, people died and we've all moved on.

Mudhoney's rise was sudden and meteoric. They'd barely been together 6 months when the Limey press shat their collective pants and hailed them as the saviours of rock. The tail-end of the '80s was an interesting time to a young u/ground music enthusiast: something was in the air, something was going to break. The UK press flipped a collective wig over the likes of Dinosaur Jr. and Sonic Youth and it seemed like they'd finally woken to the fact that there was more to life than Morrissey. Not that I gave a fuck (or even read) what the UK press said about anything, but their influence was wider and more immediate than a thousand issues of MRR/Flipside/Forced Exposure/Conflicts put together. Sad, but true. Mudhoney - that was Arm, w/ ex-Green River dude Steve Turner (he left GR early on, sensing a bogusness in the air), ex-Melvins party dude Matt Lukin and nice-guy skin-whacker Dan Peters - rode the wave like they didn't give a shit, and suddenly found themselves in the eye of the grunge storm, a cultural phenomenon which became the butt of hipsters' jokes (count me in there) as America (and the world)'s mall culture jumped on board. Candlebox, anyone? Thought not.

The '90s are a bit of a blur for me. I was young, drunk and stupid, and certain things just passed me by. Mudhoney's tenure on the Reprise/Warner label was one of them. By the time they started recording for the Warner Corporation, the thought of listening to a 'grunge' band like Mudhoney made me want to heave lunch, and I was off listening to other spheres of nonsense. Whatever! The facts are these: the band made three platters for Reprise, two of which are great (My Brother The Cow and Tomorrow Hit Today - the latter of which is totally out of print in all physical formats. I made perfunctory enquiries about a possible reissue and was told 'don't bother'), and one I've never heard - Piece Of Cake - which, according to fans and even the band itself, is a lazy, half-assed effort. Regardless, Cameron's book fills in the factual gaps and tells the story of the band's bumpy ride well, from Mark Arm's junk habit (call me naive, but I never knew!) to disputes between members (Steve Turner's desire to grab defeat from the jaws of victory certainly frustrated me, so I can only imagine what it must've been like to play in the band w/ the guy) to label hassles (Reprise A & R dude, David Katznelson, is the type of major-label A & R guy you will never see again) and the details in between.

The second phase of the band, starting w/ '02's Since We Became... is dealt w/ more briefly, but by then they'd almost hit the ranks of 'heritage acts' and the dramas of the band's life had become less frequent. Matt Lukin left and Australian emigre Guy Maddison took over on bass, members had families, Arm has kept himself a steady job at the Sub Pop warehouse for many years and Sub Pop's fortunes have gone up and up since the dawn of the 21st century, after a good half-decade or so in the doldrums-slash-near bankruptcy. Sub Pop's revival could largely be given credit to Andy Kotowicz, who worked at the label from the turn of the century as VP of sales and marketing until his tragic death in a car accident in 2011. The mention of his death in the book sent a shudder down my spine: I had no idea he had passed, and used to trade records/CDs w/ him over the years (the Sub Pop CDs I reviewed in the early days of this blog were all from him - he was also a big F/i enthusiast). I had wondered at intermittent moments over the past couple of years what had become of 'Andy K.', as I saw that he wasn't listed on the label's site as an employee anymore. That's the bad news, and I obviously wasn't the only one who thought he was a stand-up guy.

Mudhoney have now orbited earth for a quarter of a century or more, and yet haven't managed to totally embarrass themselves in the process. That's no mean feat. Mark Arm doesn't sling the guitar so much anymore, the band's last few records being more basic, straight-to-tape vocals/guitar/bass/drums affairs. I miss the twin-guitar line-up and hope that if they continue on that they do in fact return to the dual-guitar sound of yore, but that's not for me to decide. In hindisght, Mudhoney are certainly one of the finer/finest musical options from the US of A ca. the past 25 years. Like the Melvins - another extremely fine long-running ensemble from the Pacific North West, albeit one who keeps the world musically guesing far more than Mudhoney do - it seems like they've always been there, even when I ignore 'em for a solid decade, and a revisit every couple of years is worth one's time. If you're a big fan, you'll need to read Keith Cameron's book; if you're not, it might just make you one.