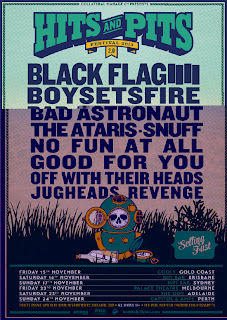 Yeah, I know: I heard. Greg Ginn has once again proven himself to be one of the more assholic individuals on earth and has decided to sue his ex-bandmates playing under the name FLAG (you know, the Black Flag-related supergroup fans really want to see). For some reason, he's even roped Hank Rollins into the mix, and since this news is rather fresh, I'm still trying to get my head around whereabouts he fits into the scenario. So far as I know, he's got nothing to do with FLAG and has pretty much given up playing music at all the past couple of years. Whatever. You can read the proposed case here. All personal feelings aside - and I do feel that Ginn should simply stop embarrassing himself and drop the suit, pronto - he may well find himself winning the case. The courts aren't about personal feelings, and let me make the crazy assumption that the judge in question likely couldn't give a fuck about the music of Black Flag either way, and Ginn's case states some simple facts: like it or not, he does hold the rights to the Black Flag name, its music and logo, and thus from a cold, legal standpoint is within his right to protect it from others attempting to profit from its likeness. Those are simple facts. Take a look at what FLAG are doing: the songs, the logo. Got me? The worlds collide here in Melbourne town this coming November. My two long-running obsessions coalesce on one evening: November the 22nd marks the 50th anniversary of the assassination of JFK, and it also marks Black Flag's debut in this fair city, playing at the shitawful Hits And Pits festival with a bunch of emo/pop-punk oxygen thieves better left forgotten (or never known). No matter what a jerk Ginn may be, and no matter how uninspired this version of the band might be, I will be there. I really don't have a choice in the matter.
Posted by Dave at 12:15 AM 9 comments:
Newer Posts Older Posts Home
Subscribe to: Posts (Atom)