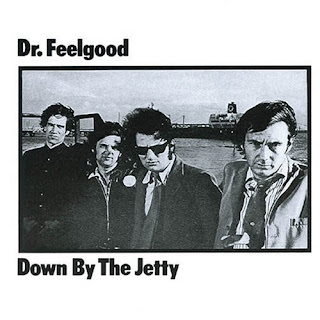 What a mixed bag of goodies I have here today. Something old, something (gasp!) new. First up is Dr. Feelgood's full-length debut from 1975, Down By The Jetty (United Artists, though I have a [semi-legit??] mono CD on Grand Records). The band has been the beneficiaries of a bit of a renaissance the past couple of years, and they're one who certainly deserve it. The unfortunate illness of original guitarist 'Wilko' Johnson, and the outpouring of love & sympathy for the guy in the press (and hearts of fans) might have something to do w/ it, but my personal theory regarding their revival - one possibly based on total BS, or more likely one which is merely based on my own experience - is that many have come around to the band nearly 40 years later based on the fact that you can now see what an awesome band they were via Youtube clips. I mean, I've known about Dr. Feelgood for 28 years, and yet I bought my first disc of theirs 6 months ago when I treated myself to a purchase on my 41st birthday. So, between the ages of 13 and 41, they were simply a band existing somewhere in my musical peripheral vision. Reading about the pre-punk pub-rock scene in the UK as a young man, it sounded like a curious bridging gap between the decline of glam and the rise of punk, but for me it remained always that: a musical bridge which was crossed, one which played its perfunctory role well but one which was obviously eclipsed by its far more interesting point of destination (that's punk, in case my rambling metaphorical nonsense has lost you). None of what I just said means a hill of beans because the fact remains: their 1975 debut is an absolutely crucial document of '70s English music, and it's not just one for the chin-scratchers and academics, but which which musically holds a great deal of water nearly four decades down the line.

Vocalist/frontman Lee Brilleaux had the menacing presence of an East End villian from an episode of Minder (or The Sweeney or... take your pick) - he really was an excellent antidote to the musical pomposity of the era - and had a matching Edgar Broughton/Beefheartish snarl, and enough has been written about Wilko's choppy guitar chords and strutting stage persona before to make anything I say completely redundant. When I would read, many a year ago, of the band's presence on the mid '70s scene, writings which would often reference them as an update on the R & B/'Stones sound of the decade prior, in my head I had them pegged as a good-time boogie band, a passable soundtrack to a pint and a game of darts, but one whose sound and presence seemed quaintly outmoded and redundant in the post-punk universe. Now there's live clips ahoy and you can witness just what an striking unit the band was in its prime, and Down By The Jetty, recorded live in the studio, is about as good an album as you'd get in that dreadful year for rock music.

There's some covers in the mix, some obvious ('Bonie Maronie', 'Tequila', a version of John Lee Hooker's 'Boom Boom' which sounds a bit light), but you also get originals like 'She Does It Right', 'Keep It Out Of Sight' and 'Roxette' which still sound remarkably raw and... I might say 'contemporary', but they sound a whole lot better than most contemporary rock & roll I've heard the past few years. Dr. Feelgood were not the Great Leap Forward that the 'Pistols et al were, but having flogged Down By The Jetty the past 6 months, I have belatedly come to the distinct conclusion that they were certainly one of the best bands in England ca. 1975 and they deserve your attention. God knows it took 'em long enough to grab mine. 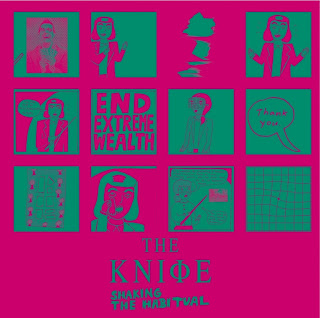 Well, this one has certainly taken me by surprise, and probably will for you, too. You may think I've lost my sense of balance, but then again, maybe you haven't heard the record in question. Young people love 'em, they get good reviews in all kinds of horrendous publications and they couldn't 'rock' if their lives depended on it (and I doubt they'd care to), but all of that counts for zip: Swedish duo The Knife have won me over with their latest recording, Shaking The Habitual, a 3LP [2 LPs and a bonus 12", I believe] set released on their own Rabid Records label. It's certainly one of the best contempo things to have graced my ears this year, so much so that I went out and bought a copy of the thing in the vinyl format (which also comes w/ two CDs of the same, some posters, a 6-panel foldout sleeve and possibly steak knives), so impressive it is as a physical as well as audio artifact.

Formed in 1999, this is their 4th full-length effort. They made a splash down here - at least enough so that people whom I wouldn't usually accept any kind of musical recommendations from were spruiking their wares to me - with 2006's The Silent Shout, and, being the total jerk that I am, I ignored them all. Whatever. I heard Shaking The Habitual at a friend's place - a friend whose musical headspace I actually don't blithely ignore - and my reaction was instant and atypical for a curmudgeon such as myself: this is The Knife and I like it. You can't argue with yourself when such an instantaneous reaction is reached. I had them pegged as a vacuous electro duo who were mining some vein of '80s synth-wave nonsense I didn't like the first time around, but there's a whole lot more going on.

Shaking The Habitual is a sum of many parts, some borrowed, some new. It sounds utterly contemporary, a 21st-century album, though I'm hearing bits and pieces of 23 Skidoo, SPK, latter TG and the slightly more 'rhythmic' elements of the 'industrial' era, as well as the cold-wave gloom of early Current 93 and Coil when they extended themselves and get really grim. But this is no downer: there's even a smidgen of Remain In Light-period Talking Heads and Hounds Of Love-era Kate Bush (two discs I like a lot), and for all intents and purposes, you could dance to this, if such an urge took you. But it's not 'dance music', because to me 'dance music' is strictly perfunctory: you listen to it because you are dancing or wish to dance. There's too much, and sometimes too little, going on here to make that grade. There's nothing cute about The Knife: it's brittle and steely and sounds absolutely right-on to these ears. Their themes are 'political', for what that's worth, although I must admit that in my currently jaded state, a radical political agenda from a musical outfit doesn't press the same buttons it once did. Nevermind. It's 96 minutes of a very good thing, and I don't feel duped in saying that Shaking The Habitual is music to these ears. You can hear the whole thing here.
Posted by Dave at 4:07 AM

Yes, quite a neglected but quite ground-breaking era between the golden age of soul(1970 - 74)and the onslaught of punk so desperately needed for our creative evolution. Other bands in this 'pub rock era' include the awesome Little Bob Story from France, Herman Brood and His Wild Romance and the Ducks Deluxe. Music that will not soon be forgotten but refuses to be due to it's high quality.