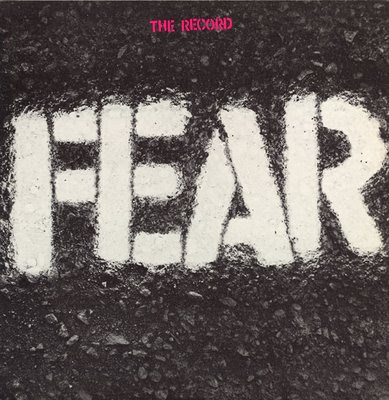 Here's a surprising holiday-season listening item which has received some air time the past week or so. It is, of course, Fear's debut album from 1982, The Record, originally released on the Slash label. Firstly, why this record? I spoilt myself a couple of days ago at one of Brunswick's finest music emporiums, Round & Round, and blew some cash on the vinyls: B.A.L.L.'s Period: Another American Lie LP, Kramer's The Guilt Trip 3LP box (which I own the 2CD of already, and indeed reviewed here a couple of years ago, but THAT BOX!! I couldn't knock it back at such a Nice Price) and, yup, Fear's The Record - actually it's a sealed new edition on Rhino Vinyl, not an original, but being a hoarder and not a "collector" (there's a difference), I couldn't care less for "original pressing" malarky. What the hey, it's the holiday season!

The purchase of The Record was purely impulsive. To be honest, I've never been much of a fan of the band - or at least much of a fan of this record in particular, which I've heard at friends' and family's homes of abode many times before over the years - but what the fuck, throw it on the pile: it's nominally punk rock, it's from California ca. 1982: I guess I need it as "reference material" or whatever. Fear occupy a strange place in the history of American hardcore punk. Just exactly what is their place? They made a name for themselves via their appearance in Decline Of Western Civilization - and what an appearance it was: this clip is pretty hot - and for their destructive live set on Saturday Night Live's infamous Halloween show from 1981 (try this link. Footage of this event is notoriously difficult to find, due to douchebag lawyers from the SNL camp), and they recorded for the large "indie" Slash, then distributed (and soon to be bought) by Warner empire, but few people speak of them as any kind of influential act. If they do, I guess I just haven't been listening.

There are a few interesting factors at play here: several members of the band were older than the average punker - singer Lee Ving was born in 1950 and had been playing in bands since the late '60s; the band was made up of fairly slick-dick musicians - Derf Scratch, Philo Cramer and Spit Stix could really play (Mike Watt noted in We Got The Neutron Bomb that he figured the members must've played in heavy metal bands before punk rock because they were too damn tight & professional) and Ving had some soaring pipes which often veered away from punk rock snarl and dangerously close to rock-opera territory (check this clip out!); Ving balanced his musical interests w/ an acting career which was helped along by his good buddy, John Belushi - for some interesting clips, go here, here and especially here, the last clip being a real oddity; the band had been kicking around since 1977, making that a full 5 years before any recorded material by the band hit the shelves - in my possibly worthless opinion, along w/ the terrible mersh/HM production on The Record, this may account for why it sounds a little, say, overcooked; and lastly, as I ramble, were Fear for real? Were they "real" punkers? Bandwagon jumpers? Frauds? Does it matter when the music is hot?

I have a friend (yes, several, actually) - a real collector nut - who has a thing for "fake punk" records, noting that often the fake ones can be better than the real ones. As a purist of some sort, a guy who was unashamedely lobotomised by the whole punk rock gravytrain as a young man and came to believe that the music represented more than mere shock value, I find such a claim to be ree-diculous. But who's to say, or care? The Angry Samoans made great punk rock records, and they were in on the same joke that Fear were: the dumb + obnoxious = smart angle. Once you've stopped laughing, I would also like to conclude to you, dear reader, that the shock-rock shenanigans of Fear is just waaaay too cartoonish for my likings. Joe Carducci noted - yes, it often comes back to him - in Rock & The Pop Narcotic that John Belushi originally wanted to get Black Flag on SNL and campaigned to the producers to let them on. Said producers baulked at the idea, deeming the band too threatening, perhaps too real, and instead settled on the Fear circus, a kind of Bowery Boys punk band who came across a bit like a hardcore new wave group from an episode of Three's Company. Perhaps I'm being a little too unkind here. After all, it really should be all about the music. And Fear did have some good songs, but they're mostly neutered c/o the smothering, de-rockified production here courtesy of Gary Lubow (and the band itself: they only have themselves to blame). From the live footage available, Fear were a really powerful live band, but the de-fanged ambience of The Record takes away all the rough edges.

Still, there's some tracks here I like a lot: "Let's Have A War" (first Fear track known to me c/o Repo Man: I remember stenciling "FEAR" on the back of a t-shirt when I was 14 after seeing the movie), "Beef Balogna", "I Don't Care About You", "New York's All Right If You Like Saxophones", "I Love Living In The City" and even the cover of "We Gotta Get Out Of This Place" (reinterpreted to the point where it barely resembles the original)... but there's also a bunch of so-so material in here ("Fresh Flesh", "We Destroy The Family", "Disconnected"), and on the whole, The Record sounds mostly to me like a bunch of seasoned session musicians playing "punk" in a recording studio for a week. Fear were more than that - they'd been playing the punk rock clubs for years by this point - but it doesn't mean that this alleged "classic" still amounts to a particulary big hill of beans to these ears.

Stack it up next to other LA discs of its day such as (GI), Damaged, Adolescents and Group Sex, and The Record really does pale in comparison. I've said before that I rarely bother discussing music and records here which you shouldn't investigate, figuring life is too short to bother reading reviews for music not worth your time, and that policy remains for this very record: Fear's debut LP is worth your time and trouble. It was worth my time and trouble, too, but somehow I suspected when I was buying it that I'd spin it a couple of times for fun, dutifully file it away and then hang onto it mostly for "research" purposes. I think that's what its future holds...


I must admit I've never been able to warm to them either, for exactly the reasons you cite. The studied obnoxiousness is too grating. You can imagine Zappa having a similar schtick if he'd had to wait until the punk era to make his mark.

Sorry to disagree, Dave, but stacked against all those classic records, it still holds up pretty well, as it has the "extra" touch that all the classic SoCal records had (i.e.: beyond being great, consistent collections of Punk Rock songs, they were way ahead of their time in many aspects: GERMS and BLACK FLAG need no introduction, of course, as they spear-headed the whole suburban HC movement- at least in the West Coast-, The CIRCLE JERKS had a more hearty-party vibe to them and, maybe, along the ADOLESCENTS kickstarted the less dead serious, more hedonistic/ skater-savvy side of the scene, whereas the DESCENDENTS probably influenced a ton of less talented "Popcore" bands, and so did the ANGRY SAMOANS with the snotty Garage Punks and Screeching Weasel-soundalikes of the forthcoming years. The first SUICIDAL TENDENCIES lp had of course a lot to do with the Crossover Thrash fad of the mid to late 80's and the trash culture and musical amauterish approach glorification of the Garage Rock revival of the 90's and beyond could possibly be traced back to the likes of early REDD KROSS). Well, the thing that I cherish the most about THE RECORD is that it does not sound like a standard HC/Punk record, and not just because of its slick sound: on songs like "We Destroy the Family" there's even some math-rock-ish feel to them (something you won't find in your sub-SSD/ Negative Approach-kinda fare) and the clockwork-like rhythm section of Derf Scratch/Spit Stix predate the rigidity of the industrial HC of the likes of Ministry or (Jello's side project) LARD by a couple of years. And I'm sure (though I might be wrong)the guys in Stormtroopers of Death took a lot of their (jokey or not) obnoxiousnes/misanthropy/jingoistic/Un-PC approach after being familiar with songs like "Foreign Policy", "I Don't Care About You" or "No More Nothing".
Besides, a band with such glorious performance as this in The Decline... deserves their place in the Punk Pantheon.
A true classic.

It's funny that you would mention Fear and "Three's Company".

Lee Ving had a tiny role as a thug in the spin-off "Three's a Crowd".

I can't find it right now. He was in a line-up.