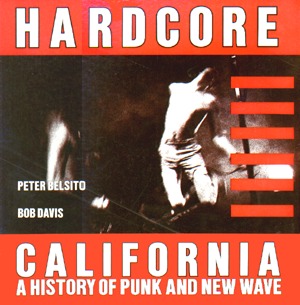 Until recently, I had a couple of boxes in the spare room gathering dust. These boxes contained books - "punk books", to be exact. The books are now on a shelf. There's nothing like having a library of punk books at your disposal. This internet thing is pretty handy, but flicking through the pages of an old tome of yore and having flashbacks to the days when not every morsel of information was at your beck and call somehow makes that bit of information that more precious. There was a time when the book known as Hardcore California was perhaps the reference point for all things in regards to early west coast punk rock. Originally published in 1983 by Last Gasp Press, it has, so far as I know, remained in print ever since (it's certainly still in print as I write this). I was given a copy by my parents for Xmas, 1986. They knew damn well I wanted the thing. I'd been eyeballing a copy of it at Minotaur Books (a well-known outlet in Melbourne dealing in "cult culture" [my term, sorry] of many breeds for over three decades), and made it known that the expensive (at the time) coffee-table book was something I not only wanted, but needed.
There were few, if any, other widely available books at the time which documented the crucial early period of west coast punk and new wave. "New wave" still makes me cringe - it makes me think of session musos in skinny ties - so I'd prefer to use the term "new music". As Claude Bessy said: new wave don't mean shit. But if anything, Hardcore California showed that Bessy was right. The book almost entirely ignores the forgotten skinny-tie bands, but instead shows how punk created a diaspora of many differing styles beneath its umbrella. You get neo-rockabilly, goth, power pop, cow-punk, synth-wave, paisley underground, noise and, yes, punk and hardcore, but there is precious little page space wasted on transient new wavers.
Put together by Peter Belsito and Bob Davis, two names who don't often figure in the history books of Californian punk rock, these older art-scene vets (Bob Davis was the sound engineer for Laurie Anderson), despite their pedigree as art-scene vets, somehow manage to get it right: the energy, the music, the ideas, the personalities. Consisting mainly of high-quality photos by the likes of Glen E. Friedman, Ed Colver and F-Stop Fitzgerald, as well as album cover and flyer reproductions, all put together with brief descriptions of the bands, scenesters, burn-outs, desperados and legends which made up the two main scenes - the book is divided into Los Angeles and San Francisco - the combination of texts and images is near-faultless. What are the faults? I've been flicking through it the last 45 minutes, and I can't seem to pick any obvious ones.
The book gives you a clear indication of the unique musical flavours of both cities: the post-glam meeting point called the Masque, the centrepiece of LA's musical renaissance in the late '70s; the birth of Slash and Flipside; the onslaught of suburban hardcore as Black Flag, the Adolescents and the Circle Jerks' fan base left its city confines and the musical fallout that followed: everything from Redd Kross to 45 Grave to the Dream Syndicate and the Gun Club and the Blasters to the embryonic Bangles. And that's (obviously) just LA. San Fran always struck me as slightly older, art-damaged and drug-affected. There was a heavy dose of all three elements in LA, too, but San Fran's music always appeared to be more self-conscious, a description which doesn't lessen the greatness of its main protagonists: Residents, Avengers, Sleepers, Crime, Flipper, Dead Kennedys, Chrome, the Target Video gang (an important piece of the puzzle in the VHS/Beta/pre-internet days), Survival Research Labratories, Search & Destroy-RE/Search, et al. The SF HC scene started slipping by '83, as imitators like Bad Posture and Code Of Honour started making a dent, but thus ends Hardcore California.
At a time when the punk rock scenes of New York and London were considered almost exclusive owners of the punk copyright, Hardcore California laid out a map to a state's music scene which was not only much better than either city's contributions to "the new music", but one which encapsulated the suburban, bourgeois alienation I felt as a teen (*sniff*). The preface states the case: "This is a book about people who did it themselves. Kids who established their own sub-culture and created a recognisable style and musical sound to identify it... They took what they needed from these previous movements and drew momentum from their contemporaries in New York and England. But, the Californian hybrid takes youth's traditional stance of defiance into the eighties with a renewed sense of desperation." If you don't already have it, you need it.
PS - my copy of We Got Power: Hardcore Punk Scenes from 1980s Southern California is in the mail.
Posted by Dave at 3:06 AM

I first came across this tome in a drab B. Dalton bookshop in a South Bay mall in '83. I leafed through that copy on many, many occasions, with my metaphorical jaw on the floor each and every time - until SOMEBODY ELSE bought the damn thing. Ackk!!! The store in question never got another copy, and so I had to wait a FULL YEAR for the second pressing to actually purchase it. That wait was, as I recall, particularly excruciating lemme tell ya.

But like you it was this book, more than any other, that solidified my love/fascination/obsession with California punk and related "new musics". Without it, no doubt I'd ended up a banker or some such nonsense. Instead, I ended up . . . well, you understand.

Also gotta give a shout out to writer Danny "Shredder" Weizman, who I thought did a great job discussing post-Masque SoCal underground action is this book, especially given his tender young age. I avidly followed Shredder's speaking/writing career in the mid-80's, though fell off the trolley when he joined Double D Nose (too much Red Hot Chilli Pepper for my blood). Heck I still have a self-published book of his laying around here someplace, called Superkool Joyride Migraines - a great and spirited epitaph to Hollywood youth/life that one is.

I bought my copy from Glenn at Gaumont Books in Little Collins St. The minute I saw it, I had to have it. My copy has never been relegated to a box, though.