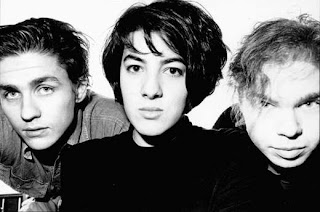 Nostalgia for music one was never even into at the time? That's an odd concept, yet certainly not unthinkable. Galaxie 500 are one such example. In this regard, I would peg them alongside the likes of My Bloody Valentine. Not sonically, mind you (though there's definite similarities), though the original time frame that these bands were "hot" - approximately 1989-'91 - my musical head was elsewhere. SST, Die Kreuzen, Wipers, Bored!, Helios Creed, Fugazi - whatever - I was still in the midst of a post-hardcore/SST hangover, and I needed music w/ grit. Galaxie 500 didn't make the grade. Too mannered, maybe too collegiate, and worst of all, they were critics' darlings in Ol' Blighty. Hell, I even thought they were English for a day or two. They were merely from Boston via New York... and attended Harvard ferchrissakes! I'm also a recovering Anglophobe - did I mention that? But all of this isn't to imply that I disliked 'em. Being a Kramerphile, the fact that he - Kramer, that is - happened to produce all of their albums didn't hurt. There's also that kickass version of The Rutles' "Cheese & Onions" on the Shimmy-Disc comp', Rutles Highway Revisited, possibly the best track on that estimable compilation of songs. And "Blue Thunder", the single off their second album, 1989's On Fire, got some heavy rotation on the video-clip TV program, Rage, at the time: and I did indeed like that song a great deal. It's got that warm 'n' fuzzy Kramer production, like everything was wrapped in warm blankets in the studio, and it's even got a bit o' blazing sax c/o Tin Huey's Ralph Carney. The album itself was licensed to Festival down here, so it got a semi-push from all involved (or the best a quasi-major could do down here pre-"alt-rock revolution" when they were probably staffed by clueless incompetents and under the helm of management who likely didn't even know the band existed), but it was all for nought. Galaxie 500's US label, Rough Trade, went under right around the release of their third and last LP, 1990's This Is Our Music, and the band called it quits when singer-guitarist Dean Wareham (an En Zed transplant!) left the group. That left the duo of Damon Krukowski on skins and Naomi Yang on bass and vocals. They went off on their own w/ two members of the great Massechussetts psych outfit, Crystalized Movements, to form Magic Hour, as well as having released a number of stripped back, melodic and often deeply psychedelic records as Damon & Naomi. Dean Wareham went on to form Luna, a band who were kind of a big indie deal down here in the '90s but never budged me an inch. But back to Galaxie 500. I bought their 3 albums on CD about 3 or 4 years ago. Why? The urge just hit me. They were there, they were cheap and something in the back of my mind had me thinking I mighta missed out on something the first time 'round. The conversion is belatedly complete. The band released the three LPs between the years 1988, 1989 and 1990 - Today, On Fire and This Is Our Music - and they're pretty near perfect. As has been said before, whilst the rest of Underground Amerika was trying to be the Stooges, Galaxie 500 eschewed the macho "rock swagger" (it had to be said) that HC had wrought across the land (I'm actually talking "grunge") and created a very ephemeral, dreamy music. You might even take a deep breath and call it feminine. They had more in common w/ the shoegaze set from across the Atlantic (one of the reason I briefly mistook them for Limeys at the time) than Mudhoney, and now that flared tempers have settled, Galaxie 500 are a band I can enjoy w/ aplomb. The three LPs don't really differ from each other much at all. In fact, production techniques aside (the 3rd is slightly less murky), they're fairly interchangeable. The sound is pure Moe Tucker tom/snare tribal beats, Sterling Morrison strum and Wareham's boyish, slightly atonal vocals. Wareham didn't always hit the right notes, but in a Jonathon Richman/Daniel Johnston scheme of things: that hardly matters. The band doesn't work w/ singles, not because there aren't strong individual tracks (the debut, "Tugboat", "Blue Thunder" and their reconfigured cover of Richman's "Don't Let Our Youth Go To Waste" are highlights), but because it's the overall feel of the long-players which weave their magic. As with The Feelies, who were actually a big-league band in my head ca. 1991, Galaxie 500 were most certainly one of the best VU-damaged bands of their day. Listening to their discs 20+ years later is confirmation of that. Their catalogue is in print, easily attainable and I suggest you attain it w/ ease.

Hi,
Been reading your blog for the last couple of years. It's great. Keep it up.
A post on Crystalized Movements/Magic Hour/Major Stars/Wayne Rogers/Twisted Village et al would be great. IMO Rogers has a pretty amazing discography. So much great stuff out there.
Cheers.