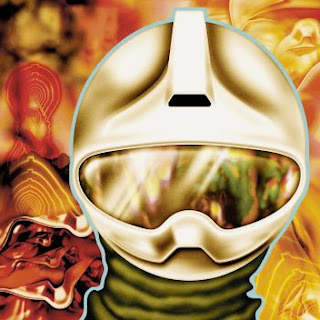 Here's some proof that my head isn't terminally stuck in music's past: a few positive reviews for some records made and recorded in the here and now (or near enough). Not only that, but both of them are positively aimed towards a youthful audience. Well, there is no "target market" as such, but let's face it: the average fan left the womb much later than I did. Let's cut to it...
The artist known as GARY WAR has been floating around my brain the last few years, but only in the last 6 months, when his Jared's Lot LP/CD was placed right in front of me for persual, have I taken the plunge. It was released earlier this year on a newish operation run by Emeralds' John Elliott, the Spectrum Spools label, a side imprint of Editions Mego, which is essentially a resurrection of the old Mego label from the 1990s. Taking notes? Editions Mego has proven itself to be an eclectic and prolific stamp of approval in the 21st century, and I, for one, am keeping mental notes of what it is they do.
Gary War is from Cambridge, MA, and now makes NYC his home. He has a few other discs out on Sacred Bones and Captured Tracks, and there is little else I can fill you in regarding his music biography. What I can tell you is this: I really like what he does. What he does do has obvious precedents: Chrome, Screamers, Nervous Gender and many others mining the veins of what is known as "synth-punk". Yeah, I know, it's all so 30-35 years ago, and in any sense of the word, it lacks musical innovation. It's not creating anything new, it's simply apeing a well-worn path in a very good way. Should you ask for more? I can't think of the last time I felt that contemporary music was truly moving forward, and in this day and age, I don't even ask for it, and I certainly don't demand it.
There's 8 tracks on Jared's Lot in under half an hour of tunes. That may sound skimpy, but for this kinda schtick, it's perfect. The propulsive electronic drums, swirling keyboards, heavily treated vocals and occasional guitar (sometimes just used for texture, sometimes for punkoid riffing) never outlive their welcome. I've chosen the track "Superlifer" as a preview. I could've picked any of them: they don't vary all that much.
Parts of Jared's Lot remind me a lot of some of the latter, and albeit dodgy, Chrome records, even post-Helios Creed Chrome, when Damon Edge kept the name to release a slew of fruity and not particularly great albums in the '80s. In the midst of my Chrome obsession back in 1990/'91, I even bought a couple of said discs (and still own 'em!), and, like I said, whilst they're not exactly records of any great quality, they've got a strange, robotic, almost European electroid vibe which works a certain magic in a chintzy way. Gary War is a little bit like that, but he's also a little bit of many other things. As a stew, a brew, what it is he's doing is something I want to hear. It's an ace, retro-futuristic, psychedelic and electronic combination of all of the above: the songs come and go on Jared's Lot, but the songs are good. It works because it isn't pure schtick: there's some craft in here, too. I'm impressed, and I want to hear more. 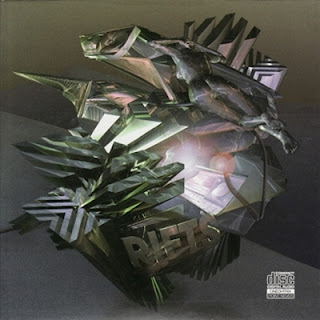 The pundits are telling me that the interwebs is going to render all of us - perhaps barring tech-heads and Amazon warehouse grunts - redundant within a decade or two, and I'm almost starting to believe it. I was tossing up the idea of a vaguely indepth review of this 2CD set by Oneohtrix Point Never, Rifts, a record which compiles the first three LPs into a handy, shiny piece of metal and plastic... seemed like a good idea. A preview track seemed an even better idea. Who needs a preview track when the whole goddamn 2 1/2-hour set is right here on Youtube, deeming the entire concept of musical criticism/evaluation redundant? The idea of anyone filtering anything is becoming similarly redundant. You don't need my opinion when you can just hear it for yourself right now and be the judge, but that's never stopped me before. Me? I'm late to the party - heard an earlier Oneohtrix Point Never disc on the Editions Mego label a few years back and dismissed it as proggy noodling - but Rifts (No Fun - that's the label) has won me over. Oneohtrix is Brooklyn-based (as they all must be) musician/synth wizard, Daniel Lopatin, and like Gary War, his music is retro-futurism, but w/out the punk/rock angle. Oneohtrix's music is a cloud of synth washes and drones, some of it in parts edging close to late '70s/'80s Tangerine Dream (once they'd lost the spooky Krautrock vibe which made their earlier albums so damn good), a reference which doesn't usually float my boat, but like Blues Control, reviewed below a few entries, its sounds manage to make vast improvements on what could otherwise be a queasy musical proposition. Got me? Oneohtrix's music sounds to me to be mostly improvised, and whilst the prospect of a 2-hour+ release detailing solo synth noodling sounds like a slog, or maybe even pure torture, depending on your tastes, Rifts is rarely anything less than engaging, and a lot of the time it's good, even great. If you like Zombi, John Carpenter's electronic scores and Tangerine Dream's soundtrack scores, but you want music which drifts, then you and I could do much worse. Oneohtrix Point Never is music custom-made for the Vice/Pitchfork generation, but that doesn't mean I have to hate it.

" The idea of anyone filtering anything is becoming similarly redundant. You don't need my opinion when you can just hear it for yourself right now and be the judge, but that's never stopped me before."

Once I establish trust in someone's recommendations and taste, I tend to give music that doesn't immediately catch me a greater deal of time to sink in, which is usually to my benefit. I gotta imagine it's like this for most people, right?

" The idea of anyone filtering anything is becoming similarly redundant. You don't need my opinion when you can just hear it for yourself right now and be the judge, but that's never stopped me before."

Once I establish trust in someone's recommendations and taste, I tend to give music that doesn't immediately catch me a greater deal of time to sink in, which is usually to my benefit. I gotta imagine it's like this for most people, right?