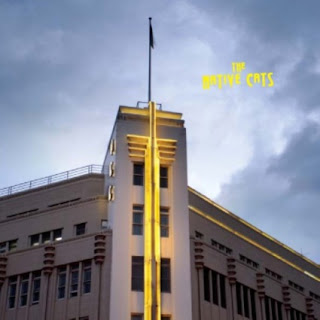 Better late than never, I suppose. I was given this CD, I guess, back in 2009. That's when it was released on the Consumer Productions label, the imprint run by one half of The Native Cats, and I'm assuming that was when said label owner, Julian Teakle, gave it to me. I've known Julian since the late 1990s or thereabouts. Great guy: you don't need me to tell you that. What I might need to remind you of is the fact that: A) I very rarely give bad reviews on this blog (you don't need to be told about all the crap records you shouldn't buy in this lifetime: that's a waste of my time); and B) If a friend gives me a record in the hope of me reviewing it in the blog, and then I never do, then there's probably a good chance that the record in question simply wasn't my bag (or let's be honest - maybe your record just flat-out fucking sucks, but we can still be friends). There's also a third possibility that I might happen to like the recording in question but just don't feel any urge to put fingers to keyboard regarding the product. Are you still with me here? After that spiel, do I actually still have any friends left?? Good. On with the show...
So, Julian sent me the CD - Always On - via Australian Post three or so years back. He lives in Tasmania; he may well be the King Of Tasmania. He's certainly one of the reigning monarchs of the music scene on that picturesque isle, having played in bands such as the Bad Luck Charms and The Frustrations, as well as being a radio dude and vocal spruiker for all good sounds which spring forth from the Apple Isle. The Native Cats came highly recommended by all and sundry, and yet at the time it didn't make a dent in my psyche. The instrumentation - the music - didn't work for me. It seemed too sparse, too cold, too something, and it didn't connect. I saw them play a couple of times back then and the reaction was the same each time. Last year, I caught them at the Tote. A dent was made, or at least a scratch. The set was a killer, and I saw the way the individual songs were constructed and performed and began to make some sort of sense of their approach. Skip 12 months later and here I am, after they made their initial musical penetration of my stuck-up defense mechanisms, playing the thing on a daily basis. The band is currently in the US of A, having played shows on both coasts as well as a set at Gonerfest in Memphis. I've been following their trails via Facebook - where else? - and it got me curious enough last week to at least dig out the shelved CD for a well-worn spin. Hell, it was judgment day.
The line-up is: Julian on bass and Peter Escott on vocals and various electronic gadgets and melodica. Peter is apparently a highly-regarded comic in his hometown, although his deadpan schtick doesn't give this talent away. Aided and abetted by a drum machine and a Korg synth for rhythm tracks and electronic treatments (although I'm sure I've seen them play w/ nothing but a bass, microphone and mobile phone as a set-up), you can hear some reference points: Teakle's bass lines are most definitely from the Joy Division/Fall school of low-end, dramaturgical rhythms, and Escott's no-nonsense vocals and strictly-personal lyrics possess a dry humour and a spoken, enunciated approach (once again) born from many an evening kicking back to the dulcet tones of Mark E. Smith. The music itself has a heavily Angloid kick, too: I'm thinking most definitely Young Marble Giants, but there's also elements of This Heat and even early New Order, and the last two tracks, "The Image Of Annie & Ivan" and "Survival House", have a cool Suicide-style drone buried in the mix. Here's the catch: none of this is playing copycat, it isn't "electro-punk", and it rises way above the quagmire of being merely record-collector rock. The Native Cats are very Australian - Escott never loses the Aussie twang - and more importantly, this is very Tasmanian, existing within its own place and time and sounding little like anything else currently in thrall w/ the ungeneral public. There's 9 songs in under 40 minutes, and there's not a track I don't like, not a track I skip. Pulling a totally neglected CD off the shelf - one you hardly ever even gave a spin in the first place [I cracked the seal on two killer Thomas Mapfumo CDs just a couple of weeks back, which had been sitting there collecting dust for 3 or 4 years, and they've hit me so damn hard I might even write about 'em one day] - and finding yourself hearing something you never picked up on before, something good, something which connects. Ride The Snake Records (go here) in the US has issued another disc of theirs on LP, and I may very well need it. Ahem, Julian?... 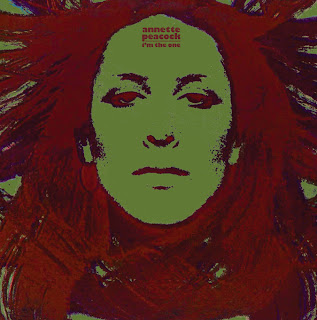 Now here's one fruity release which shouldn't have been sitting on the out-of-print shelf for so damn long. Thankfully, the good folks at Future Days Recordings/Light In The Attic have amended its sorry state of unavailability. Let me take you back to the dark ages of pre-file sharing, Youtube and other luxuries of contemporary life: in the late '90s, I befriended one Richard Mason, a kind Englishman about 10 years my senior whom I became acquainted w/ via Perfect Sound Forever (a site we were both writing for at the time). He later wrote for Ugly Things and then disappeared for about a decade but recently came back into contact w/ moi. Anyway, he made some nice tapes for me back in the day filled w/ Can, VU, Michael Hurley, Screamers and Desperate Bicycles rarities (all probably now available through the 'net after a 30-second search), but unfortunately never shared tracks from the '60s/'70s Annette Peacock and Peacock/Bley albums he would rave about in emails. I was aware of Paul Bley's eclectic career (I wrote about him just below in the Jimmy Giuffre review), but Richard's spruiking made me stand up and take notice: Paul Bley and his then-wife, Annette Peacock, collaborated on various screwy and impossible-to-find platters which would allegedly make my brain melt from my ears, and I must track them down. And then I forgot about 'em, until now.
Paul Bley plays on a few tracks on Peacock's 1971 meisterwerk, I'm The One, and his presence is felt. By the late '60s, Bley was screwing around on various primitive synths and Moog keyboards, and this obviously rubbed off on his Mrs. Or perhaps that's selling Peacock short: she'd been hanging around the avant-garde since the early '60s - she briefly played w/ Albert Ayler and was married to Ayler bassist Gary Peacock at the time - and likely didn't need the coaching. Born in 1941, she was over 30 when I'm The One was released, and it possesses the same bizarre sense of crazed oncoming maturity and confidence felt on primo Yoko platters such as Plastic Ono Band and Fly. In fact, those are the two closest reference points I could make, and the two most accurate. Press-release pensfolk often throw in Betty Davis' name in there, too, and that's close to the mark: Yoko never got this funky. Originally released on RCA, back in the day when it was trying to get hip beyond its monthly Elvis paycheck by signing the likes of Lou Reed and David Bowie (Bowie in particular was obsessed w/ her and asked to collaborate: perhaps you don't need me to tell you that anecdote) to its roster, it's one of the great major-label oddities of its or any other day. Of course it sunk in the marketplace, but that was to be expected. Some people took notice, and Peacock resurrected herself once more during the punk/new wave era w/ the slightly more accessible/successful X-Dreams, but for many, I'm The One is the pinnacle. That title track - listen below - is unbelievable. Peacock's wail is both alluring and frightening, and the roar of her voice never sounds like an art-school disaster (to borrow a Biafraism, if I may) pitched to annoy. The mixture of her vocals, sultry funk and synth whirls flying in and out has me rating this as one of the best single tracks to have graced my ears since the last time it happened, and whilst the rest of the album never reaches these heights, it ain't no slouch, either. Track three, "Pony", similarly possesses an Ono/Davis hybrid meltdown, and on "Blood" you can hear the screech of a teenage Diamanda Galas discovering music which would fry her mind forever more. Peacock's career deserves more than a mere blog post - she even recorded for ECM and is still active today - but for now there's I'm The One, once again available on LP and CD, you need it much more desperately than you imagine. Hopefully we will see Dual Unity from 1970, a collaborative Peacock/Bley disc, featuring Han Bennink, get a similar reissue some time soon.

Dave, what's your take on Galas?