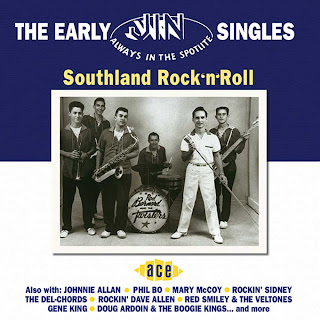 Another Ace comp' rundown... this one covers the early singles from the Jin label, a Louisiana-based imprint, started in 1958 by Floyd Soulieau, which released some of the finest - if not thee finest - swamp-pop records of its or any other day. 'Swamp-pop?', I hear you ask... Here's a Wikipedia definition:

Swamp pop is a musical genre indigenous to the Arcadia region of south Louisiana and an adjoining section of southeast Texas. Created in the 1950s and early 1960s by teenaged Cajuns and black Creoles, it combines New Orleans-style rhythm and blues, country and western, and traditional French Louisiana musical influences.

Now, I'm aware of the fact that quoting Wikipedia is a sign of the permanently braindead or those quickly approaching a zombified state, but the above description sums up the basics better than I could. I guess what you need to additionally know is that swamp-pop is a broad church. Some of what others may call swamp-pop you may call rockabilly or rhythm & blues or simply Cajun... are you still awake? Good. One of the interesting aspects of the music - one obviously born from the inter-racial realities of the area and the fascinating musical hybrids such a state of affairs can give rise to - is that many of the white performers of the swamp-pop scene sound black. And I don't mean in an Elvis-mistaken-for-a-black-guy way - AND WHAT KIND OF DUMB FUCK EVER MISTOOK THE MUSIC OF ELVIS AS BEING THE PRODUCT OF A BLACK MAN??!! The King's sound was pure white-trash hillbilly; he might've loved his R & B, he might've even said it influenced his own music (it certainly influenced his live performances), but... anyway, I digress... - but rather, the music, the delivery and the vocalisations of some of swamp-pop's greatest "white" (often mixed race but passing for "white") performers sound like real-deal New Orleans R & B hipshakers. The great Joe Barry, not featured here (there's an Ace 2CD covering his crucial early sides), was pure Fats Domino rip, as much of the balladeering work on this very CD are, but the world was no worse for it. I've come this far, and yet I still haven't thrown around the term "melting pot". My point is this: swamp-pop doesn't mean one thing, or perhaps it ultimately means nothing, but that broad church I spoke of all those words ago is wonderfully covered in this 30-track 2003 comp', one which mixes up the different styles of music falling under the swamp-pop banner: the overtly Franch/Cajun-flavoured tunes, primal rock & roll and steamy R & B. Alas, there are no tracks by Cookie & The Cupcakes (I'm not making this up), perhaps thee best swamp-pop ensemble of them all, but again, they have their own essential CD on the Ace label covering their wares. You get the goods from swamp-pop superstar Johnnie Allan, Jivin' Gene & The Jokers (some of the best cuts here), Rockin' Dave Allen, Chuck Martin & The Honeydrippers and more. All of these were originally released on 45 RPM singles between the years 1958 - 1961. That's an incredible strike rate by anyone's standards, and one of the reason white record collector types - some paunch-prone, some socially challenged in varying ways - 50 years later still rave about such things. As a snapshot of a regional music scene at a certain point in history littered w/ a variant of musical gems, The Early Jin Singles is the bomb. 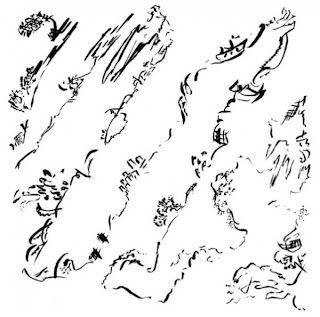 And here's something of a very different flavour, removed in regards to region, sound and time. It's Blues Control's latest, Valley Tangents (RIP Society/Drag City). It also happens to be my first exposure to the band. There is a league of contemporary "rock" of varying shades & stripes which has existed in the past half-decade that I remain almost entirely ignorant of. I know the names - Eat Skull, Psychedelic Horseshit, etc. - and yet I do not know one note of their music. That's because I'm old and don't care. NYC's Blues Control, until recently, fell under that banner. I'm also writing about Blues Control, because just last week I saw them perform here in Melbourne, after having played a few shows up the east coast, as well as the Sound Summit Festival in Newcastle. As my first introduction to the duo's music, and I'm aware of the fact that they are a shape-shifting beast which changes, chameleon-like, w/ each and every release, I must say they are indeed a weird and fruity beast. I am a great fan of this disc, and w/out meaning to turn anyone off, if such a description does, I would say that it sounds like a vaguely cosmic take on the ECM sound of the late '70s. Comprising of pianist Lea Cho and Russ Waterhouse on guitar and various other keys and effects, Valley Tangents comes across like a bizarre, even slightly fusionoid take on the Bill Evans Trio mixed up w/ mid '70s Eno (I'm thinking Another Green World). The music is guided by drum machines and rather lush and melodic piano lines (Cho has obviously studied her ivories), but when Waterhouse's guitar lines come to the fore, it's equal parts Fripp/Eno and the occasionally grotesque tones of mid '70s fusion. The remarkable aspect of the band is that they can make what at first sounds like shitawful cheesecloth fusion sound, well, good. Blues Control are no Return To Forever - the music is far too obtuse and abstract, much of the 6-track LP coming across like a series of musical sketches. That's not to imply that they come across as half-baked or not fully formed; the album has a certain playfulness, as if the duo are fucking w/ expectations of what the songs should be. The only other comparison I could make - a similarity brought up by others before me - is Durutti Column, particularly their first two LPs of abstract, delicate instrumental sketches which possess a beautiful, understated lyricism within. Valley Tangents is one fucking head-scratching release. As a live unit, they made no attempt to explain themselves. It was just plug in and play. I saw them at the Liberty Social in the big smoke last Friday night, my first night-time venture into the city in an eon, and I'm glad I made the effort. Firstly, I saw Adelaide's goth-punkers, Rule Of Thirds, who sounded a whole lot like Christian Death, but as I remarked to a friend I was there with: that's not a bad thing, and it remains a musical, scientific fact that punkers make better goth music than actual goths. I said that such a theory may even make for a good blog entry, once expanded upon. He shot me down, slapped some sense into me and told it as it was and is: such a thought is best kept strictly to Facebook status updates. That aside, Rule Of Thirds were good, they had the songs and the gloom and they "rocked" and the bass player donned a beret, spiked-wristbands and jackboots like he just escaped from the set of Suburbia, so he gets an 8/10 for me. Two points deducted for the lack of any Kevin Seconds-style facial adornments. The Woollen Kits also played, a band who previously always left me cold w/ their Beat Happening-style monotone retardo-pop, although their pace has since picked up, the tunes are hot and I found myself tapping my feet to their tunes. I think there's something there. Blues Control? They played a bunch of tracks from Valley Tangents and then an extended boogie-rock rave which sounded like an electro T-Rex shuffle w/ Fripp and James Williamson noodling on top. Or something. Whatever quarter-arsed description I may throw at it, it was, after all, very good. And their set was too short. I never, ever, EVER say such a thing, but I will this time. I could've been abused w/ another 25 minutes of whatever the hell it is they do, because whatever that is, it sounds like nothing else out there, and I do indeed like it.