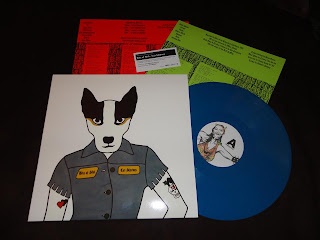 Stop-gap infotainment advertorial break: that picture above happens to be one taken of the debut LP of local deadbeats, Bits Of Shit. It needs to be plugged for several reasons: 1) A family member plays in the band; 2) Other good friends also play in the band; 3) I used to be in the band which "morphed" into BOS; 4) I co-wrote two of the goddamn songs on the LP (back in 1998, too!); and - and this is the most important bit - 5) All nepotism/egotism aside, it happens to be a really fantastic fucking record. Hell, if I bought it as a complete stranger to the band and spun its 13 tracks of musical abandon - a melting pot of sounds derived from Rose Tattoo, Wire, Black Flag and all points in between - I would know there was something good going on. Bits Of Shit's debut LP, Cut Sleeves, released on Richie Ramone's new imprint, Homeless Records, is out and about right about NOW and you will be hearing a lot more about it in the future (not from me, don't sweat it). The band is heading off to the US of A in September to play at Gonerfest, as well as a few shows on both coasts and even a couple more in between. If you happen to be in the area or within 500 miles of a show, make the effort. Go here for the band and here for Homeless. Thanking you in advance.
Posted by Dave at 4:55 AM