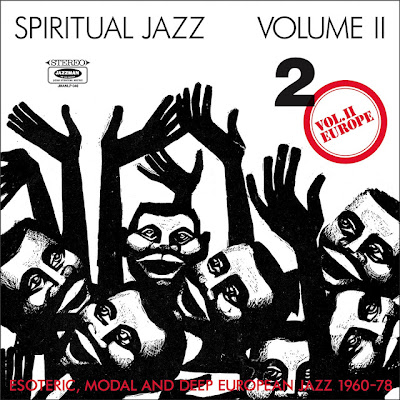 V/A - SPIRITUAL JAZZ VOLUME II CD/2LP (Jazzman/2012)
The genre known as "spiritual jazz" is oft seen as an American phenomenon. It is, after all, a form of jazz derived from the gospel churches, one which, loosely speaking, sees forms of avant or modal jazz mixing w/ both Christian and Eastern religious overtones and often hints of psychedelia. Shove that in yer Wikipedia and smoke it! So, this compilation comes as a surprise, as I wasn't aware of too many European jazzers from the '60s/'70s who'd fall under such a bracket, but the great thing about Spiritual Jazz Volume 2 (the first was a US-based one a few years back) is the uniquely European take on the sound. It's not like many of the performers within were actually deliberately apeing the sounds of Pharoah Sanders/Alice Coltrane/Don Cherry etc., as some prefigure their spiritual excursions by up to a near decade. Rather, I think it shows that a good idea, a necessary idea - just like punk rock as it sprung up in London, New York, Cleveland and Sydney/Brisbane in the mid '70s - is one which reaches like minds throughout the globe when it is needed, independent of the parties' knowledge of the others' existence (or maybe I'm reaching a bit...).
The opening track sets the tone for much of the music within, and it's a scorcher: Erich Kleinschuster Sextett's "Communion" from 1970. Kleinschuster was an Austrian trombonist and bandleader, and this track, surprisingly featuring US trumpeter Art Farmer on trumpet, contains a liturgical choir w/ a distinctly European tone, dark and distinctly non-uplifting. It sounds like a Penderecki piece or perhaps a Krzysztof Komeda soundtrack to an old Polanski film (think Rosemary's Baby), and the effect of the surging jazz along w/ the vocals is a sublime mix. One of the best aspects of the set is playing it whilst reading the extensive liner notes: it's a steep learning curve for all but the most hardy avant-Euro boffin. I know of German trombonist Albert Mangesdorf, but I did not know of his "Varies" piece from 1963, released strangely on CBS (the Kleinschuster track was released on EMI!), a brilliant modal number which again possesses that strange B & W quality of early '60s Berlin. And British pianist Michael Garrick? Exactly. He's next and his 1968 track, "Temple Dancer", again stretches the boundaries of freedom, composition, the spiritual and the psychedelic. There's more obscurities afoot: American-born pianist Phil Raphael, who relocated to Europe in the '50s, with a lengthy number, "Archangelo", from 1972, featuring the wordless, operatic vocals of Rose Thompson and a host of Belgian players belting out a cool, bongo-laden jazz vibe. French saxophonist Barney Wilen is up next w/ one of my favourites, "Afrika Freak Out", from his double LP of 1972, Moshi, a record inspired by his 1968 trip to Africa. It's a rip of Pharoah Sanders' "The Creator Has A Master Plan", or at least heavily indebted to it (featuring the same chant/melody as its inspiration), and has me wondering how good the rest of the LP may be. In between there are tracks by Russian guitarist Nicolai Gromin, Finnish pianist Heikki Sarmanto and more, but the big surprise for me is the last track by Dutch saxophonist Hans Dulfer & Ritmo-Natural. Dulfer is the father of the musically useless eye-candy pop-jazz starlet, Candy Dulfer, though he has a strong background in avant-jazz and psychedelia (as well as mersh fusionoid nonsense later on), and even cut an LP w/ the great Frank Wright back in the day. His teaming w/ the band Ritmo-Natural was an attempt to combine free jazz w/ a more danceable rock rhythm, and the result is an ace take on psychedelic jazz, sounding like a cross between the spiritual yearnings of Don Cherry and the outward-bound tribal psychedelia of aryan rockers such as International Harvester and their brethren. It's a combo which should grace your ears. It's only February, but this set is a shoe-in for one of the best archival digs of 2012. A neat and informative package giving you a glimpse into a world of music you probably never knew existed.
Posted by Dave at 11:27 PM No comments: 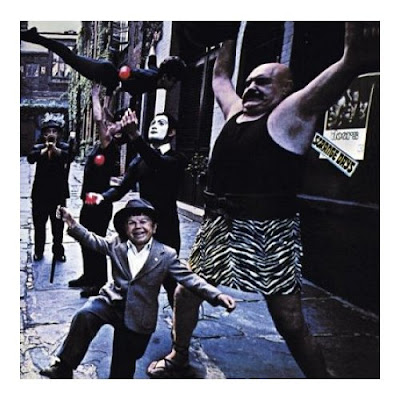 Writing about The Doors on this blog may seem like a laughable excercise in redundancy and pointlessness, but since I now own all 6 of their albums proper (don't think for a second I'm about to tackle Full Circle and Other Voices) and have played them constantly the past month, I felt it needed to be done. Hardy underground rockers seem pissed that the Doors got all the fame and money whilst the Stooges and the Velvets - two bands intrinsically linked to the story of the band (the former being influnced by the Doors; the latter being an influence) - toiled in obscurity and poverty at the time, though the general public's stupidity and bad taste is not headline news. Strangely enough, if the history books are to be believed, the Doors were still largely seen as a "cult" band until the 1980s, the starting point of their rebirth as "classic rock" being the point at which Jim Morrison's head was placed on the front cover of Rolling Stone in 1982. It may seem hard to believe, but it's true. The fact that some group of assholes at a keg party are currently singing along to "Light My Fire" somewhere on earth at this point in time is no reason not to like them.
Posted by Dave at 12:06 AM 3 comments: