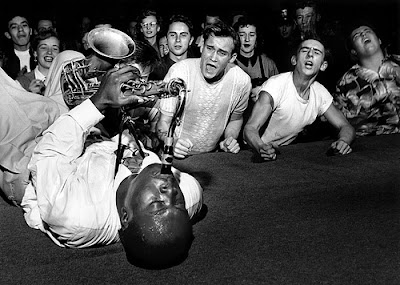 Excuse the tardiness. Real life has taken hold. I've also been completing my contribution to Niche Homo's Mix Tape Wars piece for their next issue. Niche Homo, you ask? Follow the link, buster. It's a printed zine, made on real-world paper and comprising of two staples. Such a product is going the way of the dinosaurs, though I'm glad some young bucks are still making the effort. I wrote about the concept of Mix Tape Wars here, and actually reprinted what I wrote regarding my contributions as well. From contributors Mick & Nick I had to wax lyrical on tracks by the likes of Roscoe Holcomb, The Flying Fuckin' A-Heads, The Creation, Lightnin' Hopkins, VU, Bob Dylan, Sun City Girls, Henry Flynt, International Harvester, Jimi Hendrix and more, and whilst you may consider this little excercise in the strictly nerdsville zone as beneath pathetic, I will say that it keeps me off the streets and out of trouble. And what the hey, it's a blast having someone force you to write something about an artist you otherwise wouldn't be in the mood for tackling, a problem I'm often beleagured with here. I won't print what I wrote about their contributions here; you'll have to buy the zine yourself when it comes out in a few months time.

On another note, there's a book in the works which I'm guessing will be well worth reading upon its completion: SST Records: The Blasting Concept, authored by my buddy Abe Goldman and his compadre Willi Muhlhausen. Check out the Facebook link here, if you're so inclined. Abe has spent the past 12 months or more interviewing just about everyone involved in "the scene" - it's no neophyte hack job - and when I say everyone, I mean every yokel and his Paper Bag. He's managed to get extensive interviews w/ everyone from Mike Watt, Joe Carducci and Chuck Dukowski to the St. Vitus fellows, Ray Farrell and The Stains, and from what I can gather by its progress, it's leaving few stones unturned. Goldman also appears to be fully switched on to the aesthetic which drove the label, a spirit of self-contained, artistic anarchism combined with a reverence for rock & roll's past, seemingly oblivious to what passed for cool at the time. A certain part of me is jealous that he's taken the dive and put himself head-first into a project which in the back of my mind I feel I should've started tackling a decade ago (but have been too unmotivated and/or lazy to do anything about), but I'm glad it's in the right hands. Greg Ginn? So far, I don't think he's talking...

Also of note, at least for me, is the fact that the great Big Jay McNeely will be playing here in November. The guy is 84 years old, fer chrissakes! I saw Marshall Allen lead the Sun Ra Arkestra earlier this year, and that guy is 87 w/ the lung capacity of a 25 year-old, so I'm hoping Big Jay has kept himself in shape. McNeely was one of the great honkers & screamers (to use the vernacular) of the post-war era, a time when stars were made of men who could blast their brass through the roof over a swinging R & B backbeat, an era which was pretty much wiped out upon the mainstream appropriation and success of rock & roll as many history books tell it. This entire post-war era of black American music (roughly 1946 - 1954) has become an almost shameful obsession of mine the past few years, and having one of its heroes on these shores is something which gets an old geezer such as myself more excited than is healthy. There's a thousand different Big Jay McNeely CDs and LPs on the market today - his best material is all now public domain in Europe - though if I was to vouch for one, it'd be JSP's mid-priced 2CD set imaginatively titled King Of The Honkin' Sax. It's got 58 tracks of high-energy goodness and along w/ Joe Houston's Ace CDs (such as Rock & Roll Drive-In and Blows Crazy) and The Big Horn 4CD set on Proper, it stands as the best introduction to the roof-raising sax blasters of yore.
Posted by Dave at 3:50 AM