Way back in the early days of this blog, I wrote about the Sydney "noise" trio from the '80s known as Thug. Read about it here. They remain a mystery for most humans on earth... wait, let me re-phrase that: most humans on earth will never, ever in this lifetime know of, nor care for, the band known as Thug, and that is nothing to shed a tear for, for that is the way of the world. I've known about 'em for 24 years of my life now, and once again that places me in a distinct minority (a good place to be). They were one of the greats. Their most famous member was one Mr. Tex Perkins. He's since made his name w/ outfits such as the Beasts Of Bourbon, The Cruel Sea and as a solo artist, one who writes and performs original material, and one who plays shows around the country to old folks singing the songs of Johnny Cash (that last line ain't a joke, for anyone from overseas who is unaware of this recent development in his career: Tex earns a rather sweet living down here w/ a touring Johnny Cash tribute show). None of these other projects are, were or will be - in this writer's opinion - of any great interest or worth. Tex's greatest artistic accomplishment remains his time in Thug, and that's despite what he may think of his past involvement in the small world of toilet-humour-ridden noise (or noise-ridden toilet humour). Check out the clip above: it's smut you can dance to. Thug were a visionary pile of nonsense and I'm glad someone saved some moving images of their brilliant rubbish and shared it in this digital age.

The latest statistics reveal that the world of blogging, for the first time in nearly a decade - or since the early '00s, when it first became popular - has decreased in the last 12 months. That is, people ain't blogging like they used to. The explosion of social media, namely Facebook and Twitter, can be blamed for this: who can be bothered penning paragraphs of waffle for no one to read when you can post a two-line hit seen by many? As well as that, many blame a lack of time, a lack of response from the readership, and, well, a lack of readership. I think that even moreso, the overwhelming onslaught of web-based opinion, especially regarding critique of music, films, books, sports events - whatever - has levelled the playing field to the point where everything means nothing and nothing means everything. It's one person's opinion in the sea of many, and if you don't like someone's opinion or what they have to say, you can see a thousand others at the hit of a key. So where am I going with this? Nowhere, really. I do this blog because it fills a void somewhere in me. Occasionally I check out that "real time view" people-counter on the right there; it shows me that folks from all around the world check out this site, whether by accident or design. I figure I should try to update this thing at least once a week, if only to retain my - and anyone else's - interest in it. I'll continue that effort, even though real life can often get the better of me.

Now, despite all this waffle and everything I've just said, I feel like I have very little to say right now, though I'm hoping the next few paragraphs will prove that statement to be a lie. You want record reviews? Glorified record reviews take up a great deal of my regular working life, so I'm not so keen on doing them right now. However, I'm still endlessly procuring audio goldmines which may require my two cents. Those discs pictured below do.

High Tide were a UK quartet formed in 1969 and recorded this debut LP, Sea Shanties, for Liberty soon thereafter. Founding member Tony Hill had briefly been a member of the UK-via-USA outfit, The Misunderstood, who were managed and spruiked for a time by one John Peel. One of the other founding members, Simon House, had played w/ David Bowie and would go on to play w/ other underground stalwarts of the day, Hawkwind and the Third Ear Band. All of this may (or may not) give you an idea of where their music was coming from, and where it was heading. Sea Shanties is a monumentally good, nay, great album for its days. It's 41 years later and still sounds a thousand times better than most of the bedwetting nonsense which passes for rock & roll in this day and age. One thing which strikes upon first listen, especially the first listen of the first track, is just how heavy this disc is. The guitar is layered on the mix, a slab of sound you feel like you could dig up w/ a spade. House's violin adds an extra component to their sound. It's not neo-classical nonsense; it's an exotic texture which perfectly complements the twisting-turning arrangements and Herculean wails of Hill's guitar. Sea Shanties sounds to me like the perfect combination of Do Re Mi-period Hawkwind and 'Sabbath ca. Master Of Reality. It's still steeped heavily in psychedelia, though it's veering more into a proto-prog-metal sound without the noodling nonsense that genre would soon indulge in (such as High Tide's second LP, from 1970, which is nowhere near as good as this). There's 6 songs, two bordering the 10-minute mark, and the crunch of their sound never lets up. Vocals are rare, and that's possibly a good thing, as Hills's pipes bear a striking resemblance to a tone-deaf Jim Morrison. But you still get that guitar crunch. Don't forget it. It's better than Blue Cheer, but nowhere near as good as Hawkwind. Sea Shanties has been reissued many times over the years, both bootleg and legit. It currently enjoys a rather deluxe reissue treatment c/o the Esoteric label out of the UK, including some rather pointless bonus demo tracks from the day. But what the hey, the album's never sounded better. You oughta be a sleuth and investigate.

Another Esoteric offering which has only just seen the light of day this past month is their CD reissue of The Tony Williams Lifetime debut 2LP set from 1969, Emergency!. It may or may not still be in print in the US (I had a Verve version back in the '90s... and very foolishly traded it in!), though those on the other side of the Atlantic will wanna grab their mitts on this one. And whilst your at it, throw on the pile the Esoteric reissue of Lifetime's sophomore effort, Turn It Over (not pictured). Strangely enough, I have no one but this guy to thank for getting me into these albums about 15 years back. Stranger things have happened, though having not received a Xmas card from him the past 5 years is not one of them. For their debut, Lifetime were jazz drummer extraordinaire Tony Williams (a man who'd played on various classic Blue Note platters when he was still in his teens), Hammond organist Larry Young (he'd also released a few Blue Note classics, notably Unity, and would go on to form the short-lived [and terrific] Love/Cry/Want and release an excellent album under his own name a few years later - Lawrence Of Newark, featuring James Ulmer on guitar) and noted Limey guitar maestro, John McLaughlin. Need I mention Mahuvishnu Orchestra? Thought not. Mahuvishnu's first 2 albums have their moments, though like the entire genre of jazz fusion as we know it, they began to crawl up their own backside much quicker than they should have. For Lifetime's second album, Turn It Over, which was released in 1970, they were joined by ex-Cream bassist, Jack Bruce. Bruce later went on to record a series of fairly fruity but occasionally interesting solo albums throughout the '70s. By decade's end, Williams was releasing disco-fusion LPs w/ Allan Holdsworth on guitar. Life truly went downhill for a lotta folks.

But what you do need to know is how just how apocalyptically brilliant the first two Lifetime albums were, both then and now. They were recorded at a time when the concept of "fusion" sounded like a good idea: a mixture of jazz's freedom within the context of rock & roll. These two discs have nada to do w/ the cheesecloth & moustache nonsense of most '70s fusionoid drivel. If you were going to throw them in any basket, it'd be alongside Sonny Sharrock's Black Woman and Monkey Pockie-Boo LPs from the same era and Miles' excursions into free-rock w/ Dark Magus and Black Beauty. More than that, Young's mashed-up key chords on the Hammond and McLaughlin's crunch - the crunch, always the crunch - on the strings gets me thinking of White Light-period VU and Monster Movie-era Can. This shit is raw.

There's nothing polite about these discs; the members sound fresh and ready to explode, and for 110 minutes - the combined duration of both - the energy rarely abates. Even Williams' slightly bogus forays into "singing" (more like ghetto rappin' for The Kids: this was '69) can't hold 'em back. I'd be willing to bet good money that a certain fellow by the name of Greg Ginn smoked a bong or two in his time to the sounds of Emergency! and Turn It Over: they bear uncanny resemblance to the 'Flag ca. The Process Of Weeding Out (a point brought up by music writer Robert Palmer at the time). If the MC5 had the cajones to back up their bragging rights as the ultimate combo of psychedelic high-energy rock and free jazz at the time, they might've sounded more like this and a little less like Bob Seger. I like the '5 just fine - a whole lot - though if they'd also sounded a little like The Tony Williams Lifetime ca. 1969/'70, I'd like 'em a whole lot more. 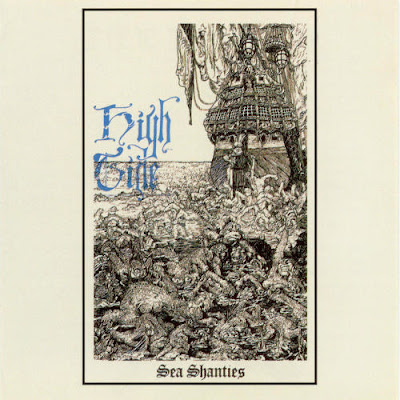 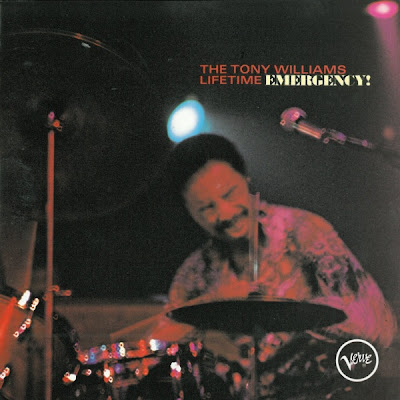 Well glad to hear at least one blogger has decided to soldier on - as you're probably aware, Joe over at Last Days has thrown in the towel. I will continue to welcome your digressively curious posts, web-based trends be damned. And glad to hear you are exploring the Esoteric Records catalogue! I recommend the Deuter CDs if you are meditatively inclined.

As a record clerk in the mid-90's, I once took a phonecall from Jim Shepard (V3) who was enquiring about the copy of HIGH TIDE's Sea Shanties we were selling in Goldmine at the time. He told me it was "that guitar" that made the rec worth all the fuss. I told him I dug Photograph Burns a whole lot, and promptly started digging HIGH TIDE too.

That rant was somewhat inspired by Joe giving up on LDOMON. Weird that he should: it seemed to be going so strong. The guy updated all the damn time!! I figure he'll be back soon in some sort of writing form. It's in his blood.
Regarding Esoteric. I should come clean: I'm actually their label manager down here! That means I have unlimited access to their entire catalogue. Sometimes I get the urge to write about it, as I did today. I hope THAT doesn't seem like spruiking. That Deuter album is great, too. There's a lot of prog nonsense in there, but a ton of great things, too (Mellow Candle, Deviants, Bill Fay, Man, etc.). That Jim Shepard story is interesting: High Tide most definitely do resemble Vertical Slit's work from the late '70s. Now THERE is a band I oughta write about one day.

I really loved that Thug 7" Dad/Thug, but watching this video now it becomes quite clear how big the Residents were an influence on them. I saw the Residents at the Seaview Ballroom around this time, and alot of grunge d00dz were claiming them as influences just to avoid telling people they were total Birthday Party rip-offs.