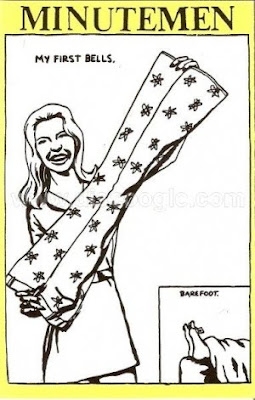 MINUTEMEN - My First Bells cassette (SST/1985)
A rediscovery on my behalf: I found this cassette buried under a pile of miscellaneous scraps of paper in the glovebox of the family truckster just the other day. Quite the find, especially when you're sick to death of driving the family around on the weekend listening to the same half-dozen tapes over and over again: Soft Boys, Pell Mell, Nirvana, Rolling Stones, Black Flag, T. Rex, Byrds. That's a mighty good selection, mind you, but repetition breeds contempt, and the umpteenth run-through of "Gimme Shelter" had me thinking I really should buy a stack of new tapes and put together a few new comps for weekend journeys... but who has the time? Me?? Not on your life. So I rummaged, and under the seat, possibly coated in a glucose-based substance and very likely having sat there for a year or two, I also found a few more: Marquee Moon, Gang Of Four, a mix of PiL's first three LPs. Not bad. These will keep me going for a while.
I bought My First Bells approximately 21 years ago. A Virgin "megastore" opened here in early 1989 in Bourke Street, central Melbourne; its selection of stock was off the map. They had Paper Bag on cassette, fer chrissake! You think anyone was going to pay good money for that level of SST twaddle? Correct you are: it was me. But in my defence, I did wait until it had all hit the bargain bin comes 12 months time. And hit it I did. One of the finds worth bragging rights to was a $5 copy of the Minutemen's My First Bells cassette, a 62-track beast which puts together everything the band released from the years 1980 - 1983. I already owned 90% of it on vinyl, but that was beside the point: it was a craftily put together compilation which boasted a couple of tracks I didn't yet own, it was the right price and I could play it on my Walkman to and from uni classes. Bad ass.
I have forever found the cassette format to be a gigantic pain in the butt. Its current revival sometimes makes me think I've woken up in crazyworld. People willingly want to go back to using that relic of a format, one inhibited by constant forward- and rewinding, sound dropouts, tedious searching for songs and tapes being chewed up in players? Good luck. I was quite the enthusiast for "tape culture" some 20 years ago - cassette-only releases usually dealing in the realms of extreme noise and power electronics - but that was a scene borne from necessity: CD manufacturing costs still priced a lot of small-time players out of the market, and for small-run releases, cassettes were the only viable economic option. That necessity bred an aesthetic. These days it's cheaper to press a CD than a cassette, and thus for me, its existence is pointless except as either a slightly insane nostalgia trip, or worse, as an extreme example of pseudo counter-cultural pretension. But I digress - and boy, do I digress - and I really should stick to the topic: Minutemen.
Back when manufacturing independent releases on both vinyl and cassette was still quite a rarity, SST was there on the frontline. They likely had the sales to back it up. There was a period in the latter half of the '80s when even their most esoteric (or terrible, you decide) releases were getting the three format - LP/CD/CA - deluxe treatment, and the fact that I managed to purchase titles by the likes of the Treacherous Jaywalkers, SWA and Paper Bag on tape lays testament to that. That may be testament to something else, too. My First Bells is something slightly different: it was never released in its form on CD or LP. It is a cassette-only release, one which puts together everything they laid down in the studio ca. 1980 - 1983. That is, it includes their debut 7" EP, Paranoid Time, debut 12" mini-LP, The Punchline, Joy and Bean Spill EPs, their sophomore LP, What Makes A Man Start Fires?, 12" EP Buzz Or Howl Under The Influence Of Heat and various tracks from compilations at the time.
Listening to it all the way through, as I did the other day when taking the kids to an afternoon birthday party way out in the eastern suburbs (the things we do...), a journey long enough for me to hear it from start to finish, it makes for an excellent guidebook to the band's evolution throughout the first half of their lifespan. The 30-second sketches which make up their debut EP are a far cry from the more expansive, jazzy and lyrical nature of What Makes A Man... And they're also far removed from the anti-mersh fuck around of Buzz Or Howl, a relatively little-known record which combines some of their best songs ("Cut", "I Felt Like a Gringo" and "Little Man With A Gun In His Hand" - later reprised on Double Nickels On The Dime) w/ barely-together studio jams. Paranoid Time is even far removed in style to its immediate successor, the former being rough, loose and lo-fi, the latter being slick, tight and w/ chops to spare. Heck, Hurley's rapid evolution as a drummer - an instrument he apparently only took up a year before the band's formation - is staggering, his skills tightened to a point where one could hail him as the best drummer of the period w/ a straight face.
The band's ongoing hit rate, as demonstrated by My First Bells, was beyond par, as it was so the end. I've written enough about the band on this blog before. You either care or you don't. If there's been a better American band of the last 30 years, then give me a name. I don't want to write any more about it. I don't need to write any more about it. If I could only take an old Sony Walkmen to a desert island, I'd be packing this, too.
Posted by Dave at 12:27 AM

Agree 100%. Me I've always considered this the single best MINUTEMEN release a guy could've owned in the second half of the 80's, one that helped me stay awake through dozens of 12+ hour drives across the AZ/NM/TX. As I bought this one even earlier, before I was too familiar with the MM discog - it introduced me to literally dozens of asskicking/mindbending tracks.

It's also got one of my favorite Pettibon drawing/juxtapositions ever as it's cover. Just amazing, that one.

I don't get the Pettibon drawing.

Q: What did D Boon say when he was eating a Snickers?

A: This ain't no Picnic

Nice joke Pussy Galore
Fantastic band and that tape does rock.I have the vinyl as well but to listen to these 60-70 songs is a great trip. Since kids my vinyl and tapes have been hidden. Don't wanna see my 3 yr old paying streamers with my tapes or frisbee with my vinyl.
Will be getting the old school stuff soon and having a blast.