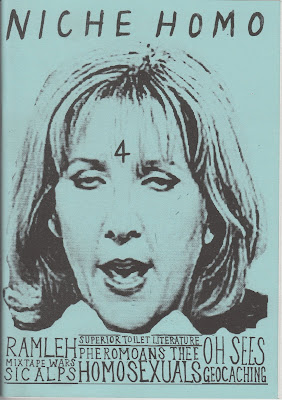 NICHE HOMO!!
A quick plug from moi... the other night I had an old friend over for dinner. He's been living in the UK for the last four years, more or less, and has come back for a few months to tie up some family business. He's my vintage and similarly has been through the wringer in regards to working like a schlep in "the biz" over the years in many guises: writing, performing, retail, label, etc. By halfway through the evening, one of intense verbal diarhhea, we were both grumbling like a couple of old grouches about The Kids. "I've only noticed this lately, but for the first time in my life, I now sense a generation gap", he said. "I couldn't give a fuck about what the youngsters are doing musically these days, it's just a rehash of better things from years past. It just doesn't interest me". I concurred and sipped my Portello in agreement. And that grouchiness takes hold of me 90% of my waking life, but occassionally the mask slips and I can accept the fact that these young folks we shake our canes at - the good ones - are merely younger versions of ourselves.
Take the UK fanzine by the name of Niche Homo, for example. It's written and published by two young gents from Leeds by the names of Nick Bannerman and Nick Jones. There's interviews, reviews, rants and more, mostly covering the contemporary underground, often veterans still active, and the latest issue, # 4, is 80 A5 pages of good toilet reading. I've even perused its wares whilst off the shitter: a compliment paid. The latest ish has some excellent interviews w/ the likes of contempo hepsters Thee Oh-Sees and the Sic Alps (two bands I'm yet to even properly hear), both of which I read all the way through, despite my lack of knowledge (and possibly interest) for their sounds, as well as indepth interviews w/ veterans/old geezers, The Homosexuals and Ramleh (both well worth reading, especially since, in a former life, I was quite a fan of both). There's no real record reviews, but a rundown on what albums to listen to at what time of the day (which range from the Dead C. to Slayer to Ella & Louis) and an extended rant on the joys of record collecting (including dawn-of-the-'90s Sub Pop singles... sheesh, if you were there, you'd be aware of the fact that it wasn't that exciting back then...) by some young guy who'll no doubt regret penning the piece in years to come. In each issue there's also a "Mix Tape War" which involves three music-nerd putzes - usually involving the editors - taping 45 minutes worth of sonics by whomever they please and then getting the others to comment on their choices. I've done this before w/ friends, and whilst it may be diagnosed by medical professionals as a distinct sign of social retardation, I can also say that it is, or at least often can be, a great deal of fun. When Nick Bannerman recently asked me if I'd do a "session" for inclusion in # 5, my immediate reaction was that I was too old for this shit - after all, I haven't made a mix tape for anyone in over 15 years - and then again I softened up and realised it'd be a lark, a neat little project and it'd keep me off the streets for a few evenings. And let's face it, the offer flattered my monstrous ego. On top of that, I'm happy to help them out.
God knows who the fuck could be bothered printing a real bricks 'n' mortar fanzine in this digital age, and I know, too: two insatiable music dorks by the names of Nick Bannerman and Nick Jones. Glad to know 'em. Their youthful enthusiasm, zest for all things obscure and relentless obnoxiousness reminds me of myself from a certain day and age, and I know that I pissed off a whole lot of old geezers w/ my similar rants.
I have made my cassette w/ contributions by the likes of Die Kreuzen, Elmore James, Meat Puppets, William Parker, Amos Milburn, Bad Brains, Pell Mell, etc. The judges await in the UK. In the meantime, I have two 45-minute sides of a tape, featuring everything from Dead Moon, Henry Flynt, Sun City Girls and Hendrix to the Velvets, Flying Fuckin' A-Heads, Lightnin' Hopkins and more. Time for me to do some writing and listening.
Posted by Dave at 2:03 PM

I suspect the youngsters are glad we mostly don't give a fuck!

Yeah, I've got this issue, and it's pretty neat. The article about record collecting (with all the snide footnotes and stuff) is pretty hilarious.

There's actually still a bunch of good fanzines out there now, believe it or not. Hardcore zines especially seem to be making a bit of a comeback.