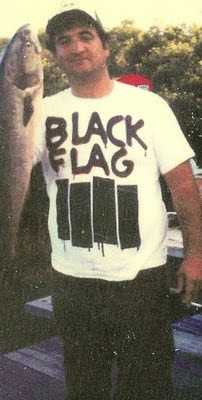 John Belushi flying the 'Flag.
I posted this w/ just the picture and headline and left it like that for a few hours. After all, a picture tells a thousand words. And then a friend asked me if I'd photoshopped it, and I realised the story had gotten muddled somewhere along the way.
The story of the intersecting of Hollywood and punk rock is a relatively brief and uninteresting one. Some of the LA set from the late '70s mixed it up w/ various Hollywood hustlers and B-movie stars (mostly as rentboys); Matt Dillon was known to frequent HC shows in NY in the '80s; Keanu Reeves, of all people, claims to've grown up listening to GBH and Discharge; Johnny Depp used to play in a punk rock-ish band back in Florida in the early '80s, and there's a persistent rumour of him being tattooed w/ "the bars"; Emilio Estevez made his non-presence known in two punk-related films of the era, 1983's Nightmares, a pretty fine compendium of short stories which was cashing in on the success of the Twilight Zone/Creepshow films of the same period, one which featured him in a segment dancing around to "Rise Above" in his bedroom (trainspotters might note that it's apparently the rare 1982 version w/ Emil on drums), and Repo Man needs no introduction (and Estevez's subsequent career, which goes from bad to worse to worst, has ably demonstrated the man to possess zero credibility and talent in just about any endeavour); and there's likely a few more I'm forgetting (or not mentioning since they fall into a later period when punk rock hit the mainstream consciousness, thus nullifying the whole experience), but the grandaddy of the punk rock/Hollywood crossover remains the good man John Adam Belushi.
For the record, I don't know whether this photo is a digital creation: I simply found it somewhere on the 'net, yet have curiously never seen it before. I didn't feel that it needed any justification, since the possibility of its authenticity is high, given Belushi's great fandom for the band. Belushi became involved in the NYC punk scene in '77 or so, and even played drums for a brief while in the Dead Boys when Johnny Blitz was stabbed and out of action. By the time he settled on the West Coast, he'd become entranced w/ the local HC scene and often turned up to shows by the likes of the Circle Jerks, Black Flag, Dead Kennedys and his good buddies Fear. Along w/ musician/scenemaker/cable TV pioneer Peter Ivers (his biography, In Heaven Everything Is Fine: The Unsolved Life of Peter Ivers and the Lost History of New Wave Theatre, is well worth a browse), he helped bring punk rock to a wider audience at the time, and could even be seen dragging the likes of Dan Ackroyd and Chevy Chase to HC shows (Dan dug it, Chevy didn't).
He handpicked Fear to appear on their notorious Saturday Night Live performance in 1981, after SNL rejected his first choice of Black Flag, and even rang Ian MacKaye the day before, making sure he brought some DC baldies w/ him to help cause havoc during Fear's performance (they did). Belushi himself appeared in two excellent films, Animal House (one of the funniest films ever, fuck you very much), and The Blues Brothers. You may smirk at the latter, due to its confounding popularity with just about every moron who ever stalked the earth the last 30 years, though popularity doesn't denigrate its greatness as a film; and besides, any movie which can coax killer performances from Cab Calloway, Aretha Franklin, James Brown, John Lee Hooker and Ray Charles on celluloid, in between car chases, surely has something going for it. Belushi's other films are perhaps best left unspoken for, but his due as a wildman punk rocker - a real-life "Bluto" of the stars - must be given. He was funny as a fart in a spacesuit and had great taste in music. That's a winning combination and enough for me.
Posted by Dave at 11:32 PM

Good post. "Neighbors" w/ Belushi was a good film too, or at least a really weird one. And FEAR was on that soundtrack, right?

I watched "Neighbors" about 20 years back and thought it was unrelentingly terrible... is a revisit worthwhile? I'm pretty sure Lee Ving is actually in the film, too. Then again, I caught about 5 minutes of "Flashdance" on TV a while ago, and ya know who the bad guy/thug is? Yup, Mr. Ving.

nice write up- i've never seen that photo before either. real or not, Belushi was the real goods.