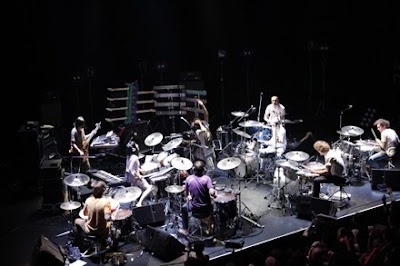 POSTSCRIPT: Below is a brief clip of the performance (including Yojiro Tatekawa being carried out on his drum kit through the crowd in the opening song), and I should note that Rob MacManus didn't play w/ the band, but instead they had some guy from Regurgitator (a band who musically blow horse cock, but I'll give 'em credit for having brought the Boredoms out in 1997) take his place. Enjoy.

Thanks, Jan. I care.

I've been meaning to write a bit about the "Boadrum 9" show I attended last year, but this post pretty much sums up the experience. Definitely in the blissful-groove-trance category.

After reading this review, it prompted me to counter-phrase the old 'I may not know much about art...." line to "I may know a lot about art, but I like it more when they fund something I like".

Pussy has a point I tend to agree with. While it's convenient to use descriptive phrases, all these wacky sub-subgenres become babble after awhile and only really appeal to record collecting geeks. Music is music, but it can be helpful to say "psychedelia" or "bluegrass", etc. rather than "difficult music" (whomever made that one up should be fed his own writing, it would make him retch), etc. At the outside, the babble gets to be at the level of "rural outsider speedmetal" or some such nonsense.