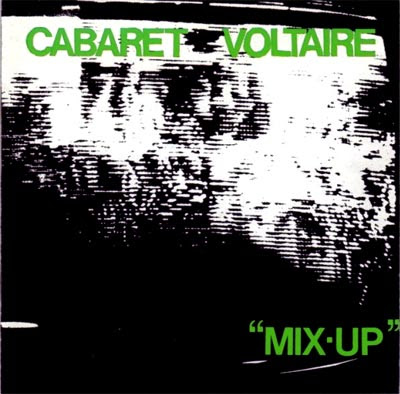 CABARET VOLTAIRE VS. CHROME
Two different bands on two different continents somehow both managed to nail a sound down right at the tail end of the 1970s. So far as I know, they were barely aware of each other's existence at the time, though the musical similarities are startling. I guess one could say "Big deal" about such a fact: similarly good ideas (even bad ones!) often pop up at the same time from different corners of the globe, usually due to the need for, and execution thereof, said idea, to exist. To state the obvious, that bands in such isolated corners of the globe as the Electric Eels and the Saints could both be playing in the year 1975, completely oblivious to the existence of each other, is a beautiful thing. Both obviously recognised the need for their own primitive brand of sound to exist. Both Chrome and Cabaret Voltaire had a bit more media hoopla (relatively speaking) surrounding them in the late '70s than any u/ground outfit could in 1975, thanks to the press attention and network the punk explosion fostered, but they still managed to independently arrive at their peak sound with I can only assume was minimal awareness of each other. But this is all just context, and of little interest if the music isn't great... 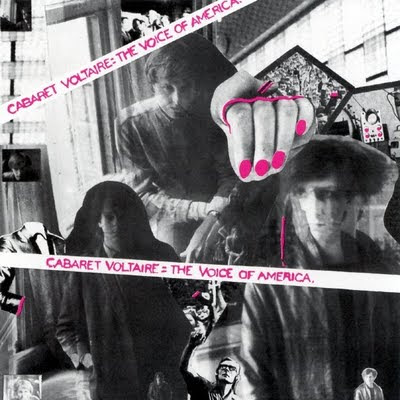 Both bands pioneered a genre which would later be bastardised, watered down and eventually spewed out onto the masses as "industrial rock", and both arrived there through entirely different circumstances. CV's roots go all the way back to Sheffield, UK, ca. 1974. There's an excellent 3CD set on Mute which documents this period (actually, it's 1974-'76), when the trio were messing w/ tape loops and guitar feedback. Somewhat similar to Destroy All Monsters' recordings from the same period, they're a fascinating glimpse into mid '70s teen angst within the despressing landscape of Britain at the time. CV have always listed their main influences as '60s garage punk a la Nuggets (they cover the Seeds' "Pushin' Too Hard" on their debut), the Kraut drones of Stockhausen, Can and Cluster, dub reggae (the one key element to their sound which totally differentiates their sound from Chrome: it's a Brit thing, obviously) and the cyclical, cocaine-fuelled minimalist funk of James Brown and Miles Davis' records from the early '70s. Their influences fit them like a pink rubber glove: all those alleged signifiers of their sound are present. Much like Chrome's two best records, CV's share great similarities but also differ in subtle ways, making them a great set of discs to play within the context of each other. 1979's Mix-Up (both of these were originally released on Rough Trade and are now out via Mute) has a more dense sound, concentrating more on harsh electronics, shouted vocals and a Suicide-like claustrophobia; whilst The Voice Of America (1980) is far more spacious, with dub-like effects on the drums and an almost funky repetition (think Can ca. Future Days) which creates a totally zoned, blissed-out effect. Critics from the last 30 years have spoken widely on the greatness of CV's early albums, often using such catch-phrases as "Dystopian nightmare", "Ballardian concrete jungle" and "Burroughsian cut-up techniques". Such pseudo-literate nonsense cut it just fine w/ undergraduates at the time, though I'll refrain from such talk. The fact is, CV managed to make two utterly excellent disks which perfectly married the electronic avant-garde and raw, primal, teen rock 'n' roll sensibilities. They never quite got there again, later devolving into a boring techno band in the latter half of the '80s, before splitting off into solo projects such as the dub-heavy Sandoz and Chris Watson's environmental/ambient recordings (both of which are pretty good), though never make the foolish mistake I did for many a year: figuring Cabaret Voltaire to be a bunch of wet-blanket dancefloor wannabes caught in the shadow of Throbbing Gristle. Both Mix-Up and The Voice Of America prove them to be absolutely one of the finest Brit combos of their time. 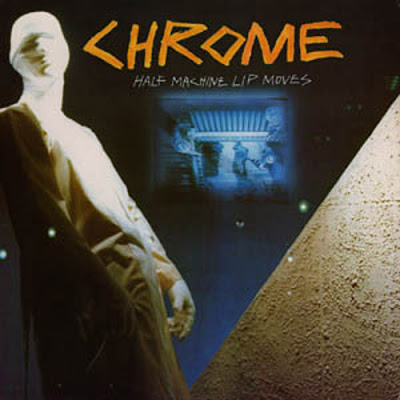 When Touch and Go finally issued Chrome's 1978/'79 masterpieces, Alien Soundtracks and Half Machine Lip Moves, onto vinyl and CD in 1990, it was like the heavens had opened. A band I'd only heard about for years - indeed, I owned a couple of Helios Creed LPs on Subterranean and AmRep - yet couldn't hope to find for less than collector prices, had been made available again. I bought the CD w/ both albums intact and proceeded to flog said albums into the dirt for the next half decade. There were few other artists - maybe Die Kreuzen, Half Japanese and MX-80 Sound - whom I played more often during the period 1990-1995 than Chrome. When it came time to writing some blowhard piece in Year Zero zine in 1995 documenting my Top 10 Desert Island Discs, you can bet that Chrome was right in there. 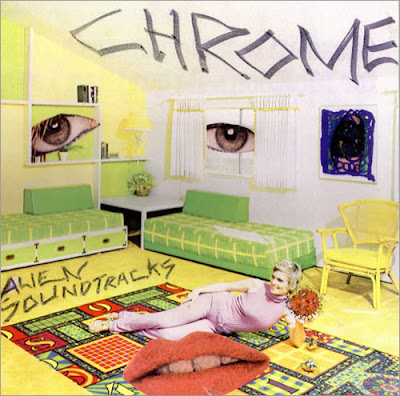 The band - essentially Damon Edge (now deceased) and Helios Creed - already recorded and released an album in 1976 (sans Creed) called The Visitation, a record not usually given high props by the cognescenti. It's often viewed as a failed experiment by the band, or at least one which is still too embryonic in approach, too caught up in '70s cosmic/prog rock w/out the necessary punk oomph of the following two albums. I finally got to hear the thing a while ago (I did used to see it on LP around the traps 20 years back, but was always scared of purchasing it, given its rep and my reluctance to spoil my worshipping of all things Chrome), and if you're curious, go right here and give it a try. Whilst it doesn't scale the peaks of their greatest works, it's by no means a dud: what it does sound like is something approximating Fripp and Eno (on guitars and vocals, respectively) mixing it up w/ the high-energy/lo-fidelity scunge of '73/'74-era Stooges and the psychedelic hysterics of late '60s San Fran ballroom guitar masturbators (think Quicksilver, maybe even a little early Santana). With the arrival of guitar extraordinare Creed on the scene, the band certainly took on a whole new, other-worldly form. Part Philip K. Dick, part Stooges-derived garage band and part Hendrix guitar-squawl overload, the band was an incredible combination of awesome riffs - actual rock'n'roll songs - and barely-together avant-garde electronics, a sound spliced and diced with a thousand different ingredients and kitchen-sink instrumentation masterfully pieced together as a whole. As w/ CV, both albums are cut from the same cloth, with the latter album finding the band some more space amidst the clutter. There was certainly no other band in America doing what they were doing; the likes of the Residents and Suicide shared some basic elements - a total deconstruction of rock music being one - but Chrome don't really sound anything like Suicide or the Residents either. The band went on to record a series of albums up to 1982, peaking again w/ Third From The Sun, a disc which is more pure and elemental riff-rock than its predecessors, though the entity known as "Chrome" was merely a trademark for Damon Edge for much of the 1980s, and as with the similar story of John Lydon and PiL, the results were about as impressive (ie. - they weren't). As with Cabaret Voltaire, you only really need the two studio albums mentioned: everything else is superfluous, though not with its rewards, even if slight in some cases.
Speaking of superfluous, most of that which I discuss in this blog is exactly that: you don't need it. Not the case here: these four records are mandatory. I haven't been shooting my mouth off here for over six goddamn years for no reason: there's no excuses!
Posted by Dave at 6:20 AM

Great post mate - you've now got me curious to hear all those early Cab Voltaire records I've never bothered with before. It was precisely all that unfortunate literary referencing (Ballard Burroughs BLAH!) that kept me away for so goddamn long.

Great post mate - you've now got me curious to hear all those early Cab Voltaire records I've never bothered with before. It was precisely all that unfortunate literary referencing (Ballard Burroughs BLAH!) that kept me away for so goddamn long.

That's cool. Though, I hear more similarity between Chrome and Hula myself. All great bands either way..:)~Bioklastik