This blog is over 5 years old now, w/ over 400 entries to its name. That's gotta count for somethin'. Since my comments box buggered up a few years back, ALL the previous comments were lost, which means that we - socially-challenged music nerds - couldn't discuss such important matters as the greatness of Thug, the musical brutality of BGK and the sheer awesomeness of somethingorother. Well, we could, but all prior words of inane banter were taken out of the equation and now some of these entries lie there collecting dust like an unwanted AmRep 10" from 1994. Perhaps it's time for a revisit, if you will. Here's some links to things from the past which you may care to browse...

HAWKWIND
Posted by Dave at 3:02 AM 7 comments: Links to this post 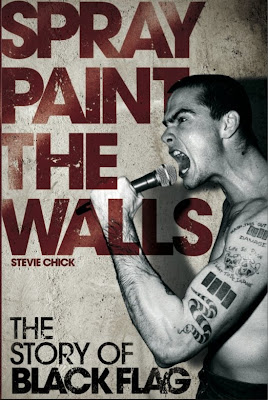 WHAT YA' READIN' FOR?
The late, great Bill Hicks may just be the comedian of choice for stoner bozoes the world over, but since I'm often accused of being one myself, I'll use his quote from above for this post. The onslaught of rock 'n' roll-related books - specifically underground rock - hasn't abated the last few years. In fact, the tide just continues to get higher and higher, and I, for one, am glad. Beneath the dross there's bounty to be found, and over the next four entries, I'll review some which fit that bill. Clearing out the spare room a few months back, which included me having to box up all my books, I was taken back by the sheer number of tomes I have relating to the topic known as "punk rock". Putting them all together, I almost had to smirk: so this is what it has come to, a few years years off the big 4-0 and all you have to show for yourself is a veritable library on a topic you should've well and truly shut the doors on once puberty left you. That was one side of my brain speaking to me. The other side simply stood back and quietly gloated over what a cool collection of books I'd managed to amass and promised itself it would never sell them off in a bizarre fit of "growing up". A man's gotta have a hobby, a passion, right? This is one of mine. On with the show! 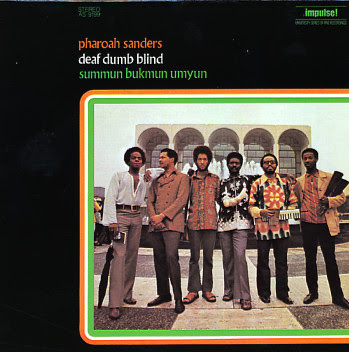 PHAROAH SANDERS - Deaf Dumb Blind (Summun Bukman Umyun) LP (Impulse!/1970)
There've been two strains of sound which have hotwired my brain of late, and, I'm sorry to say, but neither of them are anything new. I've been eyeball-deep in various rock 'n' roll books of late, most notably Spray Paint The Walls: The Story Of Black Flag, John Robb's Death To Trad Rock, Trapped In A Scene: UK Hardcore 1985-'89 and Gimme Something Better, a history of Bay Area punk from the '70s to the '90s. All of these will be covered next time, but the words within have gotten me digging the crates and dragging out some ol' chestnuts from the Adolescents, Circle Jerks, Avengers, Dicks, Big Boys, Flipper and Fang like the last 25 years of my life barely happened. It's a trip, but a good one. I'll do a rundown on those tomes in the coming week. In the meantime, it's Pharoah Time. I've said it before and I'll say it again: Pharoah Sanders' run of goodness - nay, greatness - from 1966 to 1974 is at the top of the pile: Tauhid, Jewels Of Thought, Karma, Izipho Zam, Deaf Dumb Blind, Black Unity, Live At The East, Thembi, Wisdom Through Music, Love In Us All, Village Of The Pharoahs and Elevation. That's a lot of music, right up there w/ Miles' '69-'75 output, when he was spitting out double LPs like they were going out of style (and judging by his sales and criticial reception at the time, they were), and almost as good. As with his fellow travellers Don Cherry and Alice Coltrane, whose discographies from the period overlap both in style and band membership, Pharoah tempered his screeching ambitions with a heady brew of One World spiritualism, stealing sounds and themes from the Orient and Africa, as well as occasional Latin-derived rhythms. It's a polyrythmic brew which'll turn on any Can or Miles fan, and unlike some of the more hardcore avantisms of its day (such as Anthony Braxton, Derek Bailey et al), it's got a groove and a sense of momentum. This shit was a major influence on two of the best experimental folk/rock albums of the period, too - Tim Buckley's Starsailor and John Martyn's Insideout - and represented a time when major record companies were actually willing to take a gamble on some edgy material in the vain hope that it might make some sort of a dent in bonged-out dorm rooms across the land (that time came again in the early/mid '90s, and believe me, we ain't ever gonna see something like that happen again). Where does Deaf Dumb Blind fit in? Right in the middle. Just like Miles' work from the period, all the albums and different and yet somewhat the same. Similar themes and even tunes are revisited over several albums, and really, there's no better way to appreciate it than to simply listen to the lot, one after the other. When I actually have a few spare hours, I have done just that. Three to four hours, one after the other. Deaf Dumb Blind has two side-long tracks, "Summun Bukman Umyan" and "Let Us Go Into The House Of The Lord", which even a committed agnostic (perhaps an oxymoron, I know...) such as myself can truthfully describe as "spiritually uplifting", and anyone with an interest in avant-garde music of any stripe needs it. It's nominally "jazz" music in the same sense that Can were nominally a "rock" band. It carries far too much musical terrain to be pigeonholed, and if anyone's gonna talk about some sort of all-encompassing phrase such as "Great American Music", then Pharoah's gotta be in it.
Posted by Dave at 1:39 AM 5 comments: Links to this post 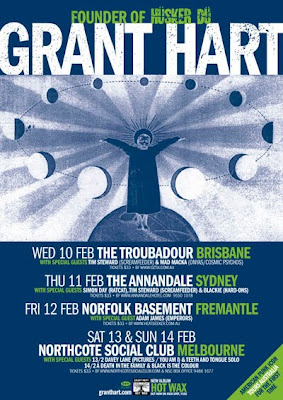 I wrote about the genius of Grant Hart's Intolerance LP from '89 here. His new album, Hot Wax, has probably fallen below your radar, but it shouldn't. It's incredible. I can only assume that all applicable folks reading this will be in attendance.
Posted by Dave at 3:11 AM No comments: Links to this post

TEEN ARCHER
New-ish local 4-piece who absolutely knocked my socks off last Friday at an all-ages show I caught at the Loophole Community Centre w/ a bunch of hardcore bands. Yes, I'm still swingin' it w/ The Kids. What are you doing w/ your life? They've got a 10" out and I need it. And when I get it, I'm gonna write about it. Sonically, there's major 'Flag damage happening - mostly w/ their awesome sense of tension/release and inventive guitar twaddling which fills their songs - but they've got some sax action in the mix, too, lending it a quality non unlike Funhouse or Loud-era Half Japanese. Whatever. They don't sound like anything blindingly obvious, but their insanely lively performance (headlining to a half-empty room, after the venue had been packed solid all night w/ folks going wild to the support acts, whom, good as they were - and they were good - kept their sonic structures much more in the comfortable confines of "hardcore punk". What the fuck is wrong w/ you people?!) just about blew my head clear off. It felt good. I left stunned and jabbering. I'd just seen something great. This rather sketchy clip doesn't really do 'em justice, so you'll just have to take the plunge yourself.
Posted by Dave at 2:45 AM No comments: Links to this post

The great LOUIS JORDAN has been somewhat of a small-time obsession of mine the last six months. Everyone should have some Louis in their life. The guy was a megastar performer, hitmaker, songwriter and even filmstar throughout the 1940s and early '50s, his list of truly great songs almost staggering. I have a 56-track 2CD on the JSP label covering his '50s material and there ain't a dud in it. His popularity began to wane as rock 'n' roll hit, which is somewhat ironic as his wild, jumped-up rhythm 'n' blues littered w/ bawdy lyrics, bad-assed raps, wailing horns and pounding rhythms prefigured much of what passed for rock 'n' roll throughout the latter half of the '50s. For my money, it bettered a lot of it, too. Not that Louis never got his due: he sold a zillion records in his day and even featured on a US stamp a few years back. Can't get much more recognition that that! Favoured by paunch-ridden middle-aged collector types, I'm putting this clip here so everyone can get a taste of his genius.
Posted by Dave at 1:36 AM No comments: Links to this post 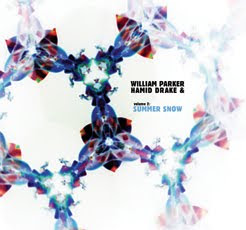 JAZZ-NOT-JAZZ
Admittedly, that may be the dumbest headline I've come up with yet, though I can't think of anything else which better describes it. Summer Snow is a 2007 release from famed bassist extraordinare William Parker and his usual skin-hitting sidekick Hamid Drake, a follow-up to the equally-great double-disc they released in 2001, Piercing The Veil, and whilst both are well known in the realms of "jazz" (of the avant-garde variety), this ain't a jazz disc. Released on the excellent AUM Fidelity label - the late-20th-century-cum-early-21st-century label of choice for such a glorious racket, this one sees the duo branching out into something different. At a whiff, you could even throw this into a generic "World Music" basket, but such a term wouldn't cover the correct ground which this traverses. Recorded live in a Brooklyn studio in front of a small audience in 2005, it sees Parker playing a variety of instruments: bass, talking drum, Shakuhachi, doson'ngoni (or "hunter's guitar", an instrument which Don Cherry apparently used on some of his classic ethno-psych-jazz sprawls in the '60s/'70s), dumbek and water bowls; with Drake on tabla, frame drum, gongs and regular drums. The feeling is meditative, minimalist and raga-like, only on occasion breaking into a jazz swing, such as the bass/drum duel "Konte". Summer Snow sees Parker and Drake stretching their musical boundaries and delving into a smorgasboard of hypnotic sounds, the result being not a series of musical sketches or jams, but something fully formed and whole. A great bong-hit late-night listen, and anyone who's vibed to the sounds of primo Terry Riley, the otherworldly sounds of '70s Don Cherry and Alice Coltrane or Eno's On Land, will get a kick out of this one. There's about two-dozen or more discs with Parker's name on it which you absolutely need, and this is one of them. 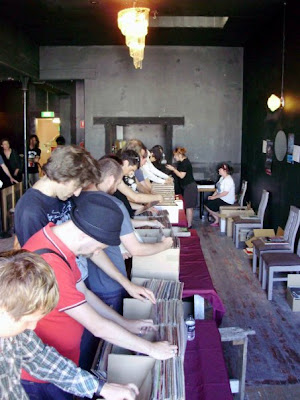 MUSIC-DORK ALERT!! (and that means you!): Music biz vet, ex-Au-go-go honcho and founder and man-who's-done-the-lot, Bruce Milne, has sold his famed record collection. The vast bulk of it went on sale yesterday at Ya-Ya's (a music venue) during a daytime record fair. I attended such an event, my first all-out record-fair dorkfest since 1996. I've reached some pretty low points in my life, moments I care not to share in such a public forum, but there's certain things I just won't do, and lining up to look through some guy's record collection is one of them. Braver and more patient souls did such a thing and walked away with high-priced (but reasonable, I'm told) gems under their arms, probably breathing easy and reaching an unprecedented state of Zen bliss with their new purchases. Despite claims by some to the contrary, and despite the mountains of records, tapes, CDs, DVDs and fanzines clogging up every inch of spare room about 5 metres from where I type this, I'm not a collector kinda guy. Senseless maniac hoarder, perhaps, but the concept of "original pressing" means zip to me. Give me a $30 CD reissue over a $300 original any day. Still, I love to watch the wheels of obsessive geekdom spinning, and if you're happy, I'm happy. And I'm more than happy w/ the $10 Twinkeyz LP I picked up...
Posted by Dave at 3:45 AM No comments: Links to this post
Newer Posts Older Posts Home
Subscribe to: Posts (Atom)