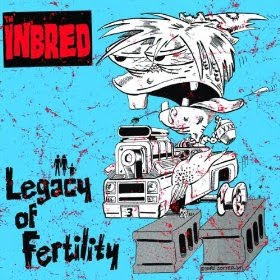 "JAZZ-PUNK" part three...
Here's a reissue - and purchase - which came totally out of the blue. I used to own West Virginia's Th' Inbred's debut LP, A Family Affair, back in the day. Bought it in '88 and played the life out of it. Sold the thing a decade later when I realised I didn't want any second-string hardcore records cluttering up my house. Bought the reissue just recently when I subsequently discovered that nostalgia-trip second-string hardcore albums aren't such a bad thing. Alternative Tentacles has done a great public service in reissuing the complete discography of this sorely overlooked band as, in hindsight, Th' Inbred were streets ahead of just about anything else happening in hardcore punk in the latter half of the '80s, and whilst such a remark adds up to zip in aesthetic terms (sorry folks, but for me the entire genre pretty much totally ate granola after '86, and has forever since), all context aside, there's some killer tuneage happening here regardless of time, place and genre.
Th' Inbred released two LPs in their lifetime, 1986's A Family Affair and 1988 Kissin' Cousins, a couple of comp' tracks and an EP, then slipped away to oblivion, only to see their efforts run out of print and be largely forgotten by the punker population at large, myself included. What set them apart from a zillion thrash outfits crying for the head of Reagan was their musical chops. These guys could play, and with chops to spare had the smarts to throw in some influences beyond the obvious. Heavily inspired by jazz-damaged Black Flag, especially in their long, drawn-out instrumental passages, some of which sound like early Slint outtakes; the art/noise rad politico angle of Crass; old-time freaksters such as the Fugs, Beefheart and Sun Ra; furious progsters like mid '70s King Crimson as well as the riff-o-rama of Led Zep, Th' Inbred were more than just Fuck You by numbers.
Well, in the lyrical dept. you may laugh at the quaintness of the constant rallying cries against society, religion, work, the middle class and the inherent hypocricies and narrow-mindedness of the hardcore scene (like, duh!), but back when I was a zit-faced teen, maaan, those words spoke to me. They're still speaking to me, coz I keep listening to the damn CD every day. Hmmm... maybe I could make an instrumental dub of this. There's also some heavy Jello damage here in the vocal/lyrical dept., too, as well as a seriously ill-advised stab at funk/rap, so you have been warned if that's the kinda thing which gives you the shivers.
Still, there's 36 tracks here and very little of it blows; some of it is pretty brilliant. If I'd heard this for the very first time right now at this point in my life I doubt I'd be this excited, but the rosy tint of nostalgia washed over me like a sponge bath on my first listen to their Family Affair LP in almost 20 years, and if that's what it takes to put a skip in my step in this day and age, then I'll take what I can get. Less pathetic individuals will simply, on their very first listen, grab their ears around this well-packaged set and dig it for what it is: fun and furious prog/jazz-infused punk rock from the US of A, ca. late '80s, which still packs a punch.

Click here for an interesting posthumous interview with the band from 1990.
Posted by Dave at 3:34 AM No comments: 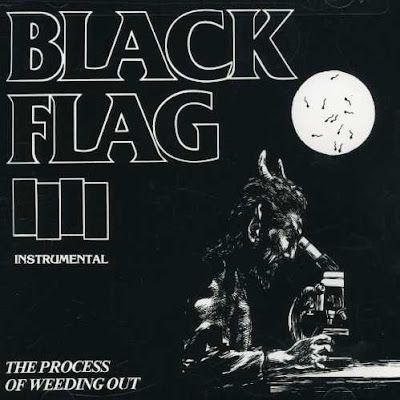 "JAZZ-PUNK" part two...
Talk about kicking against the pricks! Some people just don't get it. Is the re-evaluation process happening for this much-ignored gem underway? My re-evaluation happened long ago. I hope others give it a go. I won't write about it - done that before - instead I'll reprint a review for Black Flag's Process Of Weeding Out 12" EP, a masterpiece of slow-burn avant/improv/jazz/punk/metal which had everyone running for the hills upon release (and an EP I once stated I wished had been a double LP!), from the pages of Ink Disease fanzine ca. 1985. See what I mean? Some people just didn't get it.

Since I'm the only Ink Disease crew member to take Black Flag seriously since "My War", I'm the only one qualified to investigate this all-instrumental album. By now, the sides are drawn on Black Flag's "progression." I'm one of the few that enjoyed "Loose Nut" as much as "Jealous Again." So, with objectivity clutched to my breast in defense, I say this, "There isn't one actual song here." Not one. Listen to "Obliteration" or "I Won't Stick Any of You..." from the past and you know that Greg Ginn is capable of compsoing a real insturmental song. "I Won't Stick..." reminds me of "Wipeout", for Christ's sake, in its adhearence to classic rock'n'roll rules.
There are no rules here, and without rules, instrumentals turn into improvised jamming. Yes, I like Greg's solos. I like his unique guitar sound (the more dischordant, the better) and believe you me, you'll get plenty of it - too much. Why didn't they concentrate a bit more on developing a tune or two? All style and no substance. More stuff like this and Black Flag can join Rush as "progressive metallers."
-Brady Rifkin (from Ink Disease #10, Winter 1985)

Thanks to the folks at Kill From The Heart for keeping this one on file.
Posted by Dave at 2:54 AM 2 comments:

You can't keep a good man down... you can't even keep me down! Yep, after pulling a Syd Barrett and claiming I wanted to sneak away from the (admittedly dim) limelight of doing this blog, live a quiet family life and forget about all this rock 'n' roll shenanigans and simply enjoy music for the first time in a long time as nothing more than a FAN (I even told friends I was pulling the plug on the label, but reneged on that once I heard some Chrome Dome and Honey Ride Me A Goat and couldn't resist the temptation to release their wares on the LD imprint), I realised such expectations could never be fulfilled. I'm not sure who said it, but whoever did I gotta thank 'em for these words of wisdom which have forever stuck in my craw: music is not a spectator sport. I can't just sit by, watch things happen and not be involved, not have my say and not mouth off about the things which move me, both in the negative and positive. Of course there's a healthy dose of ego involved here, and anyone who puts pen to paper, picks up a guitar or places a mic in front of them and says ego is not a motivating factor at all is full of it. Just as long as it's not the primary reason why we do these things. The fact is: I need a mouthpiece. In my day-to-day life it's generally work (which is music, so there's no escaping that regardless) then trying to cope with fathering two kids under the age of three, and in my downtime trying to squeeze in a few tunes or a vintage horror flick to unwind to. On top of that there's also my ever-diminishing "social life", though that seems to be taking up less and less of my time these days. Other than (once again) attempting to get another 1/4-arsed band off the ground of late, this blog has been my sole form of expression - in a wider sense - for a long time, and the moment I threw in the towel, guilt overwhlemed me and I regretted my decision. All the nice words people wrote to me were both a blessing and a curse. I'm not emailing anyone about Lexicon Devil's return, and this is the only announcement I'll make about it. Anything more would reek of self-importance and pomposity and, contrary to popular belief, I don't seek any kind of limelight. This blog will exist whether two or 2,000 people read it. I'm doing it for myself. Certain things I must get off my chest and this is the best vehicle for it.