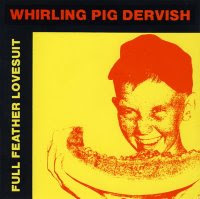 WHIRLING PIG DERVISH - Full Leather Lovesuit 7" EP (Gruff Wit/1991)
Went on a 7" binge the other night and nearly didn't make it back alive. Thank the heavens I've never sold a single 7" since I got over pop music as a 13-year-old: they're always good to travel back to at least once a year. This is one of them. I was going to wax lyrical about this here piece o' plastic at some kinda vague length, and then I noticed I'd been beaten to it by Martin over at Swedish Nurse blog. You might wanna check his quick rant out, since you can also download the thing there, too. WPD I know next to zip about. Like much of the Scottish scene of its time (late '80s/early '90s), such asDawson , Stretchheads, Archbishop Kebab, Badgewearer, Dog Faced Hermans, etc., as well as their Dutch/Euro brethren (The Ex, Donkey, Revenge Of The Carrots et al), finding any kinda real concrete information on the whos, whats, wheres and whys, even in this instant age, remains a tough one. Perhaps not so much The Ex or DFH, but if you can locate an unedited complete history of the great Badgewearer on the 'net, send me a link and I'll buy you a lollipop. WPD released this one 7" on Jer from Dawson's Gruff Wit label back in 1991, a split cassette w/ Revenge Of The Carrots a year or two later, and even apparently (since I've never seen nor heard it) an LP by the name of Three Small One Tall, and that's it. Any cassette or LP or burn/tape thereof which flies my way will be moderately rewarded. Soundwise, they inhabit the same Fall-damaged zone as DFH, meaning thick-as-tar bass lines, scattershot rhythms and twangy, almost rockabilly guitar riffs. And, much like The Fall, there's no mistaking that accent; no Mancunian drawl here, but a near-incomprehensible and unmistakable Scottish brogue (easily understood by moi as my Dad's a Glaswegian). Four tracks of angry, political yelp documented w/ a nice sleeve, mandatory lyric sheet, clean and punchy recording quality (which this kinda schtick requires) and then it's all over. All members can leave this mortal coil at one point in time knowing they impressed at least one Antipodean douchebag with what they did in this life.
Posted by Dave at 4:12 AM

This is a great little EP. If you're interested, I have Three Small One Tall ripped for upload; just let me know

Hey Dave, thanks for the mention, good to hear you're feeling better. Check out the new John Robb book, 'Death to Trad Rock', it has interviews with most of the bands mentioned on this post plus a whole load more. Just bought in yesterday in London so not read all of it...

There's also a CD to accompany the book, not sure if it's out yet.

Funny you mention that. I work for Cherry Red's distributor down here and look after the label for the territory. I noticed the CD/book in the new release mailout and have ordered accordingly! Weird to see a contemporary comp/ w. DAWSON on it. Maybe they'll finally get some props.