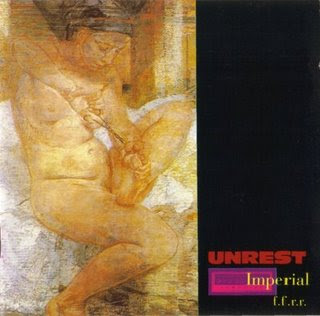 UNREST - Imperial ffrr LP/CD (Teen Beat/No. 6/Ajax/1992)
Have I written about this before? Possibly. I know I certainly did back in 1993, but that was a lifetime ago, so I guess I'm granted the right to do it again. You may be surprised when you hear the record itself, but Imperial ffrr rates as one of my absolute top 10 albums of the 1990s. I still play it to this day, and quite a lot, too. Probably shoulda made it into that Top 100 Albums Of All Time list as well, but hey, that thing's probably already bloated upwards of about 250 albums as it is. Unrest were a DC group headed by Teen Beat label honcho Mark Robinson and, at least in the '80s, were known as being somewhat of an "anti-Dischord" band, much like the similarly great (though also totally dissimilar) No Trend. OK, OK, it all sounds rather quaint now, but I guess back in the day Ian & co. dominated the nascent DC hardcore scene with such force (as he and his musical offspring probably still do) that someone had to stand up and give 'em the middle finger for no particular reason whatsoever. Unrest are actually named after an old Henry Cow album, which probably gives you an indication of the kind of oblique reference points the band were making back in the hey-days of HC. Robinson himself is/was a total Anglophile in his musical tastes, outlook and aesthetic (especially the Factory label), though he's still got that DC HC blood pumpin' through his veins whether he likes it or not, and that's one of the great things about Unrest that made 'em work.
They certainly clicked on Imperial ffrr, which is possibly more than I can say for their two previous efforts: 1988's Malcom X Park and 1990's Kustom Karnal Blackxploitation (both on Caroline). In all fairness, I haven't heard either of them since about 1995, but I bought 'em both in about 1990 and they never clicked. Robinson seemed to be attempting a stab at every genre which took his fancy and coming off none too successfully w/ any of it, whether it was hardcore, noise, pop or the kinda extraneous noise which makes you want to flip the needle off. I sold 'em years back, and perhaps before I drop dead I'll get 'em back again, but I doubt it. I recall the both of them being musical struggles I couldn't endure (and that was when I was knee-deep in Whitehouse and Merzbow records!). Which brings me to this LP. Why would you be surprised I'd like it? Because it's so darn nice. Pop songs. Harmonies. Melodies. My work colleague called me a sissy-boy and was befuddled by my love of such supposed musical lightweights. The key to Unrest actually becoming not just "good" or "interesting" but rather excellent was the addition of Bridgett Cross to the group. After Imperial ffr they made the almost-equally-as-great Perfect Teeth then called it quits, and it's those two discs w/ her you really want. They're an ace mix of almost Eno/Roxy-style Brit art-pop mixed up w/ Factory fodder and east coast undie-rock a la Sonic Youth/Yo La Tengo, and Robinson drops the smarminess that beleagured his early work - a smarminess that made Unrest come across like an annoying fuck-you in-joke only he and his buddies really fully understood - and made 'em sound like an actual rock band making records people might wanna hear.
The pedigree of songwriting on Imperial ffrr is unbeatable: the opening power-pop of "Suki", the 8+ drones and falsetto vocals of "Imperial" (the best track here), the fey cheese of "I Do Believe You Are Blushing", the '80s New Wave of the Cross-sung "June" and even the tracks, such as "Firecracker" or "Electrico", which sound like the kind of art-damaged afterthoughts which cluttered their earlier works, only this time with some effort put into them. I've got this on both LP (w/ bonus 7") and CD, the latter being reissued years later by Teen Beat w/ a ton of bonus tracks that keep fanatics such as moi satisfied (and there are actually a whole slew of alternate versions and B-sides well worth hearing, if you're at all inclined), and I don't purchase albums on multiple formats unless I really mean it, man. Imperial ffrr is pleasant as all get-up, but it kills.
Posted by Dave at 3:57 AM

I gotta say, I'm a little surprised you didn't like Malcom X Park. It's definitely a little too eclectic for its own good, but once it sank in for me, it was one of my favorites...

I'd be willing to give it another go one day, but like I said, I haven't heard it for 15 years or so. Gotta say, it really didn't click at the time, just seemed difficult for difficult's sake. Or something.

...and then they lost it again. did you ever get into any of that air miami stuff like world cup fever and some of that horrible remix stuff he started doing. oh lordy...

I have the Air Miami record. It's a nice bit of pop which I dig, but lacks a certain something which made Unrest ace. I suspect that Robinson was making a commercial stab at the time. After that, I never bothered, though I'm curious to know if any of it is good.

By the way, if you dig this era of Unrest, you totally need Grenadine's Goya if you don't have it already; it's basically Mark Robinson's Unrest II: Mellower.

Man, I will always love Unrest. Definitely give Malcom X Park another shot if you get a chance.