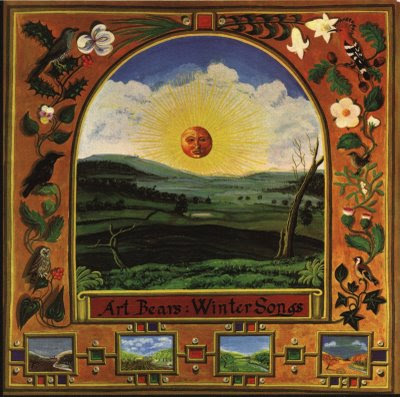 ART BEARS
Here's a band of yore still much loved in this household, though probably not talked about a whole lot. Of course, the trio known as the Art Bears - that's Fred Frith, Dagmar Krause and Chris Cutler - aren't exactly gonna be everyone's cup o' tea. Spawned from the early/mid '70s avant-progsters, Henry Cow, who did a bunch of pretty cool discs on Virgin in the day which I recall liking back in the dark ages (not the '70s!) but haven't played for over a decade, the Art Bears were a tighter, more potent and economical proposition. Inspired by the rising punk tide at the time, the band cut some of the prog fat from their wares and slimmed the sound down to a mightily listenable mixture of Euro prog of the Soft Machine/Magma/Faust school, punk anger and US art-rock of the Mothers/Beefheart/'Ubu variety. Their first album, Hopes & Fears, from '78 is still kinda in the halfway zone, mixing the epic with the trim (and featuring pretty much the whole line-up of Henry Cow), though for me the real goods have always been the rekkids from '79 and '81: Winter Songs and The World As It Is Today.
Both of these had somewhat of a renaissance in the early '90s after Forced Exposure gave the whole Rock In Opposition (RIO)/Recommended Records scene a major buzz to a generation of budding young post-hardcore dorks looking for the next thrill, and since I was one of those dorks, I bit in, hard. The major beef folks might have w/ the 'Bears is Krause's vocals: they can be painfully Germanic and austere, like Nico singing Brecht, and if you're not up for what sounds occasionally like a heavy slab of Aryan berating on the vocal front, they can grate. Strange that she took such a route of delivery w/ the band, since an early '70s disc I've got of her older (and on and off) outfit, Slapp Happy, the terrific Cascablanca Moon, has her singing like a sweet princess (and lemme take a sidestep and thoroughly recommend that disc; it is like nothing else of its time: ramshackle yet highly melodic slop-pop that sounds more at home on the K label ca. 1990 than Europe ca. 1973).
These latter two LPs got licensed to Ralph Records in the day, where the band found a nice home w/ fellow oddballs, The Residents. I doubt they sold much, since such a European flavour likely didn't gel w/ a US audience at the time, but persist w/ the Art Bears and ye shall be rewarded. Their combination of American and European influences, along w/ the rad politics and punk-ish verve still make for a hot listen, and, along w/ their buddies This Heat or even Throbbing Gristle, are a great example of an ever-so-slightly older generation who'd been under the radar in some form or another for several years getting a boost by the anything-can-happen buzz when punk hit. Seriously, I can thank these two albums, both available on one CD, for opening a gateway to other good things on Cutler's ReR label empire, as well as Cutler's rather excellent File Under Popular book from the early '80s (still in print and well worth a read), solo Frith, This Heat, Camberwell Now, Magma, Mothers Of Invention, Robert Wyatt/Soft Machine, you name it. I guess they were rediscovered in the early '90s; time for a re-rediscovering.
Posted by Dave at 6:36 AM

Good post. I can't say I'm any kinda big fan of this stuff, but I've always respected what they did, lots - for being so damn ornery, contrary, and single-minded in the pursuit of a particularly difficult/challenging musical nirvana. These ART BEARS are some hard working, dedicated people, indeed.

Lots of different routes to this lot, but they arrived on my "must get around to listening to..." list (where they remain for now) when I found out that the superb intro music at Cardiacs concerts was in fact "Albion Awake!" by Art Bears. No Teutonic berating on that one because (apparently) Dagmar Krause found the proposed lyrics too violent.