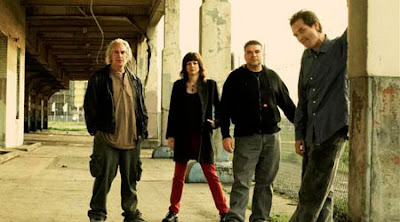 Total FLIPPER OD the past 2 weeks...
That's not entirely true. That comment assumes I've actually overdosed on 'em. Far from it. I could see 'em again. And again. And I already witnessed two 2-hour sets and had the privilege of dining w/ them the night they arrived in Australia (yeah, yeah... in true starfug mode. It was a 15-year-old Dave Lang's wet dream, so I did it). Loved every minute of their shows. People complained the sets were too long. Didn't notice the first time around; I was rather intoxicated (I'm a two-pot screamer these days, so don't assume I was slammin' 'em down) and was yelling "Moooore" at set's end, only to be alerted later on that they had in fact already slogged it out for two solid hours. Sober as a judge at the second Melbourne show, the one at the illustrious Arthouse venue, the band clicked and got better and better. Way more heavy-duty in sound and approach than their earlier records - my brother thinks they sounded like Drunks With Guns(!) - they ran through pretty much the entirety of the first two albums and a bunch of singles ("Love Canal" being the highlight) and a few newbies offa the 2CD they just put out. A buddy of mine, well-read and one who knows and cares passionately about his punk rock (probably far more than I could possibly ever care in regards to the alleged integrity and politics of punk as we know it in the year 2009) remarked to me that it was one of the most incredible, life-affirming shows he'd ever witnessed, and yet also one of the most dull and depressing, and so I just had to ask him why. Mind you, this is all via email, and his response was essentially thus: Flipper were always seen as the ultimate "anti-band". The genius of Flipper was that the audience didn't matter. If Flipper wanted to fuck around for an hour, or drag one song into a 90 minute set, or play the entire show with their backs to the audience, then that was fine. I agreed that that was fine behaviour ca. 1979-1986, but that at this stage of my life I was just old, pathetic and nostalgic enough to simply be impressed by "a great rock show". For some, that's not what Flipper are about. People go to Nickelback concerts for "a great rock show" (well, actually, they don't, but you know what I mean); Flipper shows are meant to fuck with your mind. Sorry, my mind doesn't need any more fucking. Flipper flew 1000s of miles to play in Australia, and to travel the land pissing everyone off wouldn't have done them any favours, even if that knife-edge/confrontational/Dada-esque hoo-ha was all the rage when I was riding my BMX back in primary school. Flipper ca. 2009 seemed just fine to me. Better than I could've hoped for. Perhaps we're all just mellowing out in our old age.
Posted by Dave at 5:45 AM

Do Flipper need to be the Flipper of 1979-86? I mean by this stage of their existence they're only going to be playing to their fans as I highly doubt many people will wander into a Flipper show expecting anything other than Flipper. Especially in Australia for $40 bucks a ticket. What impressed me at the Sydney show was that they delivered. Totally.

Now as far as the live rock'n'roll thing goes, I'm kind of old & jaded & only get out to shows by bands from my youth (much like Flipper) as opposed to anything new. Usually I walk out either being able to tick them off my list, or having revisited my youth as the band plays a by-the-numbers retread of their glory days. That's OK, but generally it won't have me raving about it even 5 minutes later, let alone days or weeks later, as will probably be the case. I found Flipper however to be a whole different beast. The intensity was there, as was the volatility as I pointed out in my comment on your other Flipper post, what with the onstage stoush between Bruce & Steve. I couldn't even tell you how long they played (2 hours? That's a long set, but it could've been 2 hours I guess) I was so lost in the whole experience. The only other band to come close for me in recent (or not so recent) times was Wire, what, 5 years ago?

I am curious though about a couple of things. Firstly, Bruce looking like my dad (albeit 10-20 years ago) in his button down collar & all-cotton chinos. I'm not one to talk about rock'n'roll or punk 'uniforms' by any means, but I'm thinking this might be part of the Flipper contrariness? The 'stick it to the audience's expectations' thing? Or maybe I'm reading too much into it & he's simply dressing the way he's most comfortable. Secondly is there any truth in the Ted Falconio Vietnam Vet stories? He certainly looks a lot older than the rest of the band which surprised me a bit (never noticed it in old band pictures), & he looks like a hobo from Venice Beach or something. Come to think of it, him & Bruce couldn't look any more like they come from different worlds if they tried. Just a couple of thoughts...

Yeah, I found myself lost in the moment, too. Even as a sober man, the 2 hour set flew by, and I can't say that that has ever happened w/ any other live band I've seen.
To answer a few questions... well, I can't really answer the question regarding Bruce's dress sense. Of all the members of the band I talked to at dinner, it was Bruce I spoke to the least. He dressed similarly at his Melbourne shows, and I know that my brother loved his look for the same reason: it looked like a "fuck you" statement, but who knows? Maybe he's just comfortable and doesn't care for hipster attire. As for Ted, he's 61 and did serve in Vietnam. I knew that from years ago when Rolling Stone, of all magazines, had an article on them in 1985. He doesn't like to talk about it, though (I tried, but it was obvious it wasn't something he wished to discuss). Interesting guy: he was an art teacher then union activist in the '70s and never picked up a guitar until he joined the band. I asked him what bands he listens to. The answer? Machinehead and Testament. Go figure. I asked Steve what bands influenced the Flipper sound, and it's nice to know that there was really no pre-meditated art-school answer to the question. He said the biggies were the Stooges, Led Zep and Leonard Cohen, and really, when you listen to the band, you can see how that makes sense. I'm convinced now - as if I had to be! - that Flipper are absolutely one of the greatest American bands of the last 30 years.

With you on them being one of the greatest American bands, & it took the live show to make me realise that. And to think I almost blew it off, only deciding to go at the last moment. Thank christ for that.

Funny about Ted having never picked up a guitar until Flipper. I was watching him play & it almost looked like his style was based around an inability to change chords quickly. There seemed to be a lot of open strings ringing between the chords. No doubt 30 years down the track he's learnt to play at least semi-proficiently, but his original style is still part of the Flipper sound. A bit like Ron Asheton which ain't a surprise.

Some friends of mine blew it off - BIG Flipper fans, mind you - and, being the kinda guy to say "I told you so", I'll give 'em grief about it forever. They missed out on something real good.

Flipper made it down to Hobart, and I got smashed and ended up singing sex bomb with them. Twas Fun.

I can die now.