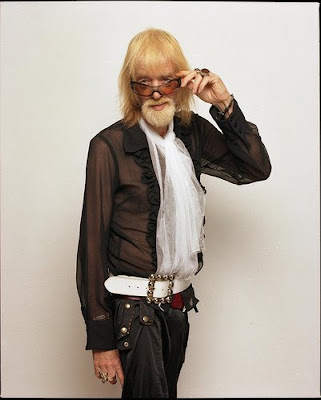 Every rock 'n' roll monkey w/ a blog and a spare moment this side of the moon is furiously putting in their two cents for the man the last 24 hours. The man is Sky Saxon. I'll add mine. When I first started at Shock Records back in '95, the first week there I stumbled into one Dave Laing - the guy who ran the estimable Dog Meat label back in the day - and, since we'd corresponded before but never really chatted, I got to talking about music I knew he'd be keen to wax lyrical on. I brought up the Seeds. I wanted to know about 'em. I figured he did. I asked him the $64,000 question: where do I start? His dry response was thus: "Start w/ the first record, then the second, then the third... or just buy this box set and never worry about it ever again". The box in question was the 3CD Flower Punk set on the Demon label (long deleted), a handsome hardcover-book-style set which I eyeballed, grabbed and decided I'd purchase that week. It contains everything you need: the three Seeds studio albums - Seeds, Web Of Sound and Future - Sky's ridiculous "blues" album of the period, A Full Spoon Of Seedy Blues, and the Seeds' supposed "live" record (which was about as "live" as that 13th Floor Elevators album), Raw And Alive At Merlin's Music Box. Throughout the following 3 months it was a regular spin on the stereo, but to be honest, it was likely eclipsed by other things I was obsessed with at the time, such as Eno, Miles and Krautrock. The Seeds didn't really make their major impact on my brain until roughly 5 years later. In a Nuggets frame of mind due to a purchase of the mind-effing 4CD box set which had come out, I dove head first back into the world of '60s punk. In the winter of 2001 I stayed for a week at a good friend's place in Sydney. The guy lived like Travis Bickle. I mean, there was nothing in his flat. A mattress, a beat-up old computer (his only source of entertainment) and a couple of milk crates to sit on. That was it. And this is a guy who had a good, well-paying job! But anyway, I was aware of this situation before I left Melbourne, so I packed a boombox and a CD booklet w/ two-dozen albums and made my way there. The two Seeds CDs I brought w/ me, which contained the first three albums, for whatever reason - boredom, loneliness, the miserable weather, alcohol, the fear of turning 30 in 6 months time - hit that certain part of my brain and made sense. Along with the Amon Duul albums we flogged on repeat, the Seeds became the soundtrack to that fateful trip. The raw minimalism of the band, especially so on their first two albums, which then blossomed into the brilliant psychedelic pop of their third (pure LA chintz like Redd Kross 15 years before their time) struck me as a genuine bolt of genius. It clicked. I hailed them to strangers and friends alike as one of the great American bands of the 1960s. Forget about the one-trick pony baloney you hear from "music critics" (the same fogeys who claim the band only ever wrote one song, "Pushin' Too Hard", and, being the talentless shucks they were, simply recycled that one riff over 3 albums), the Seeds managed to produce a genuine body of work worthy of respect. The damaged soul known as Sky Saxon, just like the other damaged souls I liked (Roky, Arthur Lee, Syd... you know the score), was my new poster boy for excess. He certainly did exceed, but he kept on going and going... and apparently even played a show just this past week. I saw Arthur Lee play here in '03 and it's one of the top 5 shows I've ever seen. Damn it, I wish I'd seen Sky Saxon, too, just as some of my friends have, but that was never likely to happen, unless I saw him on foreign shores. Anyway, my two cents have been given. I'm not up for giving disingenuous obituaries, no matter how "important" the artist may be considered by the rock cognoscenti, to people who frankly never meant zip to me, but somewhere along the way, Sky scorched my psyche and I'm happy for it.
Posted by Dave at 4:32 AM

pure LA chintz like Redd Kross 15 years before their time

I know what you mean. For a couple decades there in LA, even completely wigged out garage bands held hope of becoming bubblegum teen heart throbs, if only for one day - and for good reason! Sky and THE SEEDS did it, in truly wiggy garage teen style. Even if REDD KROSS didn't, they came mighty close.