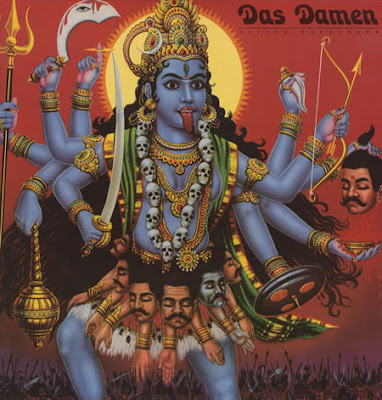 DAS DAMEN
This blog shall forever remain an empty vessel until every nth-rate SST band has been tackled, and on that note, let's discuss NYC's Das Damen. And the first thing I'd like to say is that the band known as Das Damen, one whom I recall being mercilessly derided by the likes of Steve Albini at the time (nice one, Steve, but I tried re-listening to Big Black a few years back and it merely sounded like a NIN/Marilyn Manson tribute act. Sorry), were not an nth-rate act. Certainly not A-grade, for sure, but one I can still listen to in '09, a good 21 years after I first bought the records of theirs I own, 1987's Jupiter Eye and '88's Triskaidekaphobe, and that's gotta be sayin' somethin'.
The band started out in NY in '84 and pretty soon caught the ears of one Thurston Moore, who released their debut, self-titled 12" EP on his own Ecstatic Peace label. It was later reissued by SST label once they signed the band in '87 and released their debut full-lengther, Jupiter Eye. Although criticised for its poor production and likely selling next to zip, you could do a whole lot worse than pick it up if you ever catch a glimpse of it in a bargain bin (which is likely where you'll find it). And the same could be said for the follow-up, '88's Triskaidekaphobe. The former's got a major Sonic Youth fixation thing a-happenin': think Bad Moon Rising/Evol w/ a heavier, metallic glow not unlike Dinosaur Jr.'s stoner-boogie that was taking the u/ground by storm at the time. Fact is, there's some really great songs here: the two that close out side one, "Where They All Want" and "Name Your Poison", are terrific slabs of late '80s US u/ground rock which, whilst not re-writing the songbook of rock 'n' roll (DD were, as said, totally in the ballpark of post-hardcore SST grunge-rock), warrant repeat listens and have the hooks and songwriting skills to leave you wanting more. And as for the supposedly poor production: sounds fine to me. Maybe Jim Steinman was on holidays or something.
Triskaidekaphobe has cleaner production and steers a little from the SY-style NYC art-fuzz of the debut and delves heavier into a kinda psych-glam mode, sounding a lot like a Dinosaur Jr./Redd Kross hybrid. Hey, it was 1988, so think Neurotica/You're Living All Over Me, 'k? The first three numbers slay me: "Spiderbirds", "Reverse Into Tomorrow" and "Pendant". Primo punk/metal/psych/glam with a wall of distortion and the right riffage to deliver the goods.
Which leaves me wondering: have Sonic Youth, Dinosaur Jr. or Redd Kross written and recorded songs as great as these in the last 15 years? I only say this because I have never in my life met anyone who's cared one iota for this band. NOT IN THE LEAST. Even in this one-horse town, I have met folks who have - completely independent of me and my rantings over the years - bowed down to such esoteric entities often praised by moi such as Dawson, Pell Mell and Slovenly... but never, EVER Das Damen. Let's get the facts straight: DD aren't the kind of band people should get crazy about - I merely believe they remain a decent but forgotten band who released at least two fine albums in their time (their follow-up, on Twin/Tone, after being booted off SST for a lawsuit involving Michael Jackson's lawyers [Google it if you care], is supposedly a turkey, and I remember it clogging up bargain bins in a major way at the dawn of the '90s) and since said albums will cost you next to nothing (I know coz I checked ebay this afternoon), then I'm recommending the plunge be taken. There were lots of flat-out "bad" underground rock albums released in the US in the late '80s, and neither of these fit that category. Not even close. Had the band released these albums 5 years later, when the general marketplace was a little more open to all things loud, fuzzy, distorted and long-haired, they might've even sold a few records.
Posted by Dave at 11:05 PM

Dave's back on the SST warpath, I see. Alright!

I am only really acquainted with that first DAS DAMEN EP, which I've was really compelling and verrrry stony in it's untutored Big Muff crunch/drone. Not ever spent much time with the albums you praise here . . . tho I always imagined they'd sound something like New York's FREAKS, which I guess means I thought they'd sound like they dug 80's/70's REDD KROSS waistlength hair/gtr swing. Sounds like their was more to them. Thanks - will make a point to check em out.

Hey, I'm a guy with mostly good things to say about Das Damen. I bought all the records you mention when they came out, played the hell out of songs like "Tsavo" on my radio show at the time, and drove 2 hours to LA to see the band live around 1987 or so. They were really good. Lyle, the drummer, had a GONG set up behind him, which was awesome & which I don't believe he ever hit. Also, these guys all came from hardcore bands a few years earlier - Lyle was in "The Misguided" - and had a good sense of recent music history & what was true and good. I too listened to them not so long ago and liked it, still. There - how was that? Now there are two of us.

OK, that's three guys in the year 2009 willing to champion the band known as Das Damen. I feel vindicated and wanna cut loose!

Count me in Dave. I love Das Damen and I totally echo your sentiment about Big Black. Saw them on a bill with the Screaming Trees and Die Kruezen back in like 1990 and they were GREAT!

By golly, you're right! So there is a link between Das Damen and Liv Tyler... the world gets stranger every day.

Triskaidekaphobe was a huge hit among my admittedly small circle of friends in central Pennsylvania in 1988, glad to see this posted and extra glad the album still holds up. Off to search for an Always August review...

Oh Yeah! I saw these guys in Maine opening for Dinosaur Jr. touring behind 'Mousetrap' - they were pretty good, but you could tell the end was near. God, I nearly forgot!

Great band great albums.Saw them many times too way back when.I remember playing Mousetrap a lot too but it's nowhere near as good as the two here.If I'm remembering correctly I think there was one last ep(Now I have to check the collection to see about that.)A few years later the whole band minus Lyle were backing Arthur Lee as Love.At least in the NYC area.Pre-prison of course.

Post-Lyle and post-post-Phil (ludwig bundschuhe, phileopold von trapp, etc) who was the far better bassist from 84-88 and on the solid 4 offerings of EP, Jupiter Eye, Triska and Marshmellow Conspiracy which was pulled because they did a kick-ass version of Magical Mystery Tour and was sued by Michael Jackson. Das Damen is so underrated and unknown it isn't funny.

Joe, I saw that tour too and it was, as you say, great - still one of the best shows I can remember. I haven't heard it for ages, but I seem to remember the live album "Entertaining Friends" being better than the studio records.

I've been playing these guys quite a bit on my radio show. I love 'em, like a psychedelic Dinosaur Jr with a bit of Sonic Youth thrown in. Their great, I don't understand why they never got anywhere. My favourite album of theirs has to be Jupiter's Eye. I love the track 'Do' on there. I created a group for them on Facebook to try and spread the word on 'em.

I just found the debut EP in the bargain bin today for two bux -- totally worth it.

I know this addition to the comments page is a liitle late but just wanted to add my 20 cents worth. I bought Triskaidekaphobe and Mousetrap as they came out, probably from Au Go Go Record Shop. I agree that these albums are missing that something special to push them to into Classic status but I loved them and remember being pretty pissed off that I got not one taker as I tried to spread the word. (Actually I think "Bleach" and "Up On The Sun" were met with similar indifference).
(I remember visiting Sean G at his Flat in Winsor to hear "Small Problem" demo and seeing an incredible record collection there). Simon.

I only know the post-SST LP, which, while hardly a lost classic, is in no way a turkey, either. Not very well produced, but fairly melodic, with a great pop song called "Sad Mile" that might have gotten alt.rock airplay had it come out 5 years later (and been produced by Adam Kaspar or somebody). I've been wanting to hear the SST records for years - will likely go bargain hunting for them soon.