IT'S A FAMILY AFFAIR...
Check out the clip above if you're an audio masochist: it's my brother's new-ish band The Bits Of Shit (charming...) tearing it up the other week at Eight Miles High Records in Thornbury for International Record Store Day. That's Daniel Dempster on drums (ex-Sailors homo), Danny Vanderpol on vocals and the handsome fella on the right is Andy Lang. Perhaps this is of limited interest...
Speaking of family, my wife just gave birth to our second daughter yesterday, Sadie April Lang, and I'm basking in happiness and all the warm fuzzy feelings you get from such an occasion. Life's good!
Posted by Dave at 9:46 PM 3 comments: 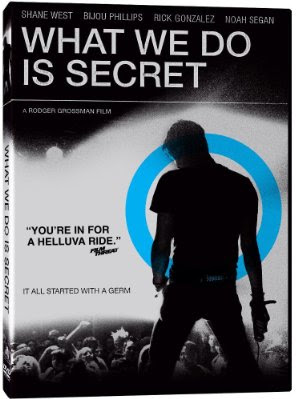 Yeah, I know, it's been a long time. Life likes to throw you a curveball every once in a while . I've had 'em in spades of late: illness, work hassles, family problems and the kinds of stresses which add up into one big month-long headache. I'll be back for real soon... when I really feel like writing about music. I would like to add, however, before I go, that I did indeed witness that movie above, and, in the words of my buddy Michael Row, it was like swallowing a shit sandwich. I'm giving it 3/10. A friend who lent it to me - a man of taste, mind you - warned me that it was like a telemovie, but still "pretty good, for what it is", so my expectations weren't great, but, as I noted to him, my interest in the subject - CLASSIC EARLY LA PUNK ROCK (is there a greater genre of sound??) - was so strong I didn't give a flying fugg if they rooted it up royally: I still wanted to see it. And that I did. And I never want to see it again. WWDIS got it all wrong: the costumes (everyone ironed and cleaned their clothes daily at the Masque? Really?), the wigs (the guy playing Don Bolles looks like Nigel Tufnel! And what was w/ Pat Smear's 'fro? IT WAS NOT THAT BIG! Jesus, they have him looking like an extra from Superfly. Any casual glance at a photo from their last gig at the Starwood would have one notice that Smear had cropped his hair to a buzzcut by then: not so here), the acting (not for a second is anyone in the movie convincing as the person they're playing, though I actually lay the blame more on the script and sets as opposed to any particularly awful displays of thespianism), the narrative flow of the film (there is none; it's a series of ticks in boxes: 1) Darby was obsessed w/ Bowie: tick; 2) Joan Jett produced their album: tick; 3) Darby was very likely gay: tick; etc.) and the sense of excitement that was palpable around the Germs and their cohorts back in the day. In short, there is no such excitement in WWDIS. This film fails the one basic test that a music biopic should match: if you'd never heard of the artist before,would it make you want to know more, to hear more of their music? I'd say very likely not. Hell, I saw Ray on a long plane flight when it came out, and even that load of middle-brow fluff had me browsing Ray Charles CDs by week's end! You get a few short scenes of Darby crawling around on stage mewling like a sick cat - really pretty well-crafted scenes; I mean, that's what he did a lot of the time - but never do you sense that they were actually an amazing rock band and, probably by accident more than by design, heralders of a major cultural shift in American independent music: the birth of suburban punk. A real teenage-style American punk rock band who combined all the trash 'n' hype of Iggy/Bowie/Runaways/malls/'ludes and mixed it up with a proto-HC aesthetic, made an excellent album and, had they not imploded, could've taken it much further. The only band who succeeded at that game was Black Flag, but that's a different story and they were, in many ways, a very different type of suburban band. Director Rodger Grossman spent 10 years on WWDIS, and whilst I know it must be terrible to spend a decade of your life making a film which, it appears, no one really liked, I'll join the chorus: the guy shouldn't have bothered.
Posted by Dave at 4:01 AM 7 comments:
Newer Posts Older Posts Home
Subscribe to: Posts (Atom)