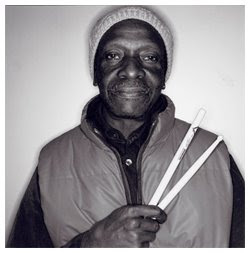 What a blast to see TONY ALLEN play this Thursday just gone. You know Tony: he hit the skins for Fela Kuti from 1968-'79, as well as releasing four absolutely crucial afrobeat discs between the years 1975-1980: Jealousy, Progress, No Accomodation For Lagos and No Discrimination. I've been on a heavy-duty African music trip the last five years, after finally being exposed to the best Ghanian highlife, Guinean jazz and Ethiopian funk/soul/jazz there is, though I always go back to my fave Fela and Tony Allen discs if I simply want to hit paydirt. Allen didn't reach the scorching levels of intense afro-funk I'd hoped for - it was more a mellow affair suited for a fellow like me to indulge in a little white-man jig-e-jig - though the 2+ hr. concert at the Corner Hotel kept me there the whole night (well, actually, the fact that I had to co-man the CD stall there was probably what kept me up 'til 1:30 in the morning on a work night, but that's a different story...), and it was a real treat. Stranger still is hanging out at a gig full of bespectacled white guys w/ an obvious weakness for purchasing insane amounts of music who also very likely have no interest in "rock" music. I like a lot of different music - anyone who wishes to hold themselves in a rock 'n' roll stranglehold their whole life isn't getting the full picture - though, to be honest, outside of my brief foray into the world of classical music w/ a Jordi Savall concert last year and a Cecil Taylor show I shall be witnessing next month - just about every live gig I see is somehow based on ROCK. And that's whether it's some avant-noise baloney, sludge, garage or cardigan-wearing indie-rock. It's ALL rock! Tony Allen wasn't. Nor was his audience. And it was a nice slice of life I probably don't get enough of.
Posted by Dave at 6:58 PM

yeah agreed it was a fantastic & refreshingly non rock show . i didn't know cecil was coming to aust.! saw pharoah sanders at hamer hall a couple of years back that was a pretty great non / un-rock show too although not as good as he was just a couple of years before in auckland ... no i'm not one of those ....

enjoying your blog. thanks.
please swing by and give me a listen.
*Davey Highben
http://autistictheater.blogspot.com

Getting back to ROCK...

When are you going to write about the Death reissue on Drag City?