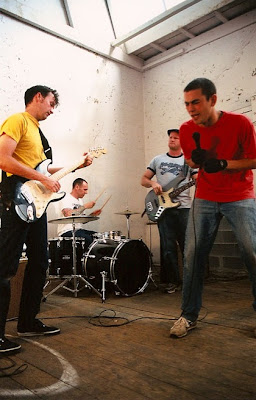 Just when you think things can't possibly get any stranger... Check this link
Last week, EDDY CURRENT SUPPRESSION RING took out the Australia Music Prize, which one could describe as being the Australian version of the Mercury Prize in the UK: a "winner", who is voted upon by his/her/its peers in "the biz", is supposedly based solely on the merit of their release, not commercial success or otherwise. Who gives a shit, right? Well, probably not most people, but it is nice to see a bunch of non-careerists who recorded their album for only $1500 such as ECSR take it out, as well as pocket the prize money of $30,000. Naturally, such a win stumps all the clueless douchebags both within and outside of the music biz. One such person is David Reyne. He co-hosts the 9AM show every weekday morning w/ "Kim" (whoever she is), and also holds the highly dubious distinction of being the one-time drummer for the Chantoozies (note to foreigners: the Chantoozies were a two-hit-wonder "girl group" made up of various soapie stars in the mid '80s down here). He's also the holder of another dubious distinction: being perhaps the most moronic no-talent dunderhead on Australian TV today, and believe me, such an honour holds stiffer competition than the annual AMP prize. But anyway, watch the clip above for Ian "Dicko" Dickson, one-time judge on Australian Idol, and his rave review for ECSR (and even the Ooga Boogas!!) and the jaw-droppingly clueless comments from the hosts. Next to these two, Dicko comes across as a national treasure.
Posted by Dave at 10:30 PM

The Eddy Current Suppression Ring are the Mental as Anything of their age.

Not surprising that they would win the Australia Music Prize

Huh... yeah, I don't even know what that's supposed to mean.

It means that Eddy Current is the Greedy Smith of his time!!!

DAVID: Oh what a peculiar title. What does it sound like?

DICKO: Well it involves men playing guitars and a loud heavy metal sound but sort of like a harder version of Poison!

Thanks Dave Boof, I have not had a laugh like that for a long time...

These guys are unreal!!!!

I heard their drummer used to be in the old Aussie Oi! band Quick and the Dead....

Anonymous said...
These guys are unreal!!!!

I heard their drummer used to be in the old Aussie Oi! band Quick and the Dead....

nah it's the bass player, who was in skrewdriver before quick and the dead.