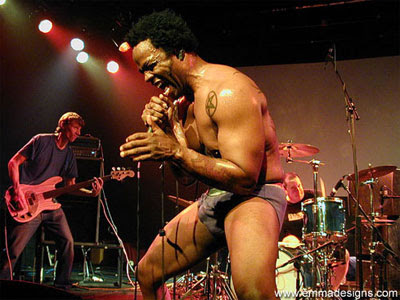 We're on the home stretch now, getting mighty close to the end of 2008... and I thought I'd have something profound to say, something to summarise the last 12 months, to tell a story of the highs and lows, but that's too trite for even a one-trick pony such as myself. Life can't be that neatly packaged. For me, 2008 was a mixed bag of stress and small triumphs. Organising a tour from an international band almost gave me a goddamn heart attack; it's like holding the biggest, most expensive party you've ever held in your life whilst you sit around wondering if anyone will show up. I'm mighty glad I took the leap, though I'm not so sure I'd make a habit of it. Releasing a few CDs was a small triumph. Actually holding onto a job in the ever-dwindling "music biz" remains a feat a few friends of mine lost a grip on recently. Good news for the US (and the rest of the world) was the election result. Less than a month left of the worst presidency on record: that's reason to celebrate. I expect no miracles from Obama, though he's a step in the right direction. I can't make any claims for great TV or cinema in 2008 since I pay little attention to either. I rented Tropic Thunder the other night and thought it was the funniest goddamn pic I'd seen in 12 months, so there you go: it gets my vote. Then again, I probably saw two other films made in 2008 and I can't remember what either of them were. Book-wise, I really dug Joe Carducci's Enter Naomi: SST, LA and All That..., though it's pretty obvious that a guy like me is what they call a "target audience". Was it just me or did I even detect a sentimental side to the great man in the tome? Seemed like he was nodding and tipping the hat to a few old friends, thanking them for a good time. Friends of mine didn't dig it a whole lot, figured it to be an unfocused mess, trying to tie in way too many disparate elements, part biography, part music history, part social commentary. It did the trick for me, and I only wish it had gone on a whole lot longer. Naomi Peterson was previously only a name I attached to the SST posse of the '80s, a staffer who'd moved on. I certainly never knew she died. Now I know the story, and a lot more besides. I hardly ever approach music books in this day and age as they rarely interest me beyond a page. Enter Naomi... kept me nailed throughout, and I'm hoping for another hefty thesis from the man in the near future. Another book which got my vote was Paul Drummond's Eye Mind: Roky Erickson and the 13th Floor Elevators. Again, this was actually originally published in late '07, though as I only came around to it early this year, it's an '08 release for moi. Drummond's bio should be used as an exemplar, a template, for how music journalists should approach their subject: a keen fandom balanced with a bounty of first-hand information gleaned from interviews and a first-rate knowledge of all background and related topics. His biography is near flawless in its attention to detail, but smartly keeps away from waffle and getting too off the topic at hand (he comes close in regards to his dissertations regarding psychedelic drugs. Boy, does he know his stuff...). Basically, if you wish to know the legendary story of Roky and the Elelvators - and the story is as good as you can imagine, just as good as the music - then this book is unbeatable, dishes all the dirt and wraps it in a strong narrative which makes it hard to put down. For my money, one of the best rock music bios ever written.
That photo above is of one Eugene Robinson from the San Fran art-rock dirge-metal band, OXBOW. I'll be investigating more of his work in the near future. His name has popped up on my radar a couple of times of late. Firstly, it was in an interview in the UK's Niche Homo zine (I wrote about that a little while back), and secondly it was when Gary Arce asked me, Dave, you ever heard of the band Whipping Boy? You know their singer, Eugene Robinson? Well, I'd certainly heard of Whipping Boy - San Fran art-punk from the '80s who were good buddies (and often played) with the likes of Minor Threat, DKs and Black Flag - though I had no idea that their singer was the same guy as the big, burly black dude from Oxbow, who had a series of albums spread out over 18 years on labels such as Pathological, Neurot, SST and Hydra Head. The same guy who's written articles for GQ, The Wire and Hustler, had written the book Fight, been a fighting champion himself, appeared on several TV shows and feature films, and... was quite obviously a renaissance man par excellence. Looks like he'll be doing vocals on the new Ten East disc, too, fingers crossed. Been listening to Oxbow's The Narcotic Story, from 2007, on the Hydra Head label. It's a more atmospheric affair, kinda late-night raspy stuff, almost in a kinda Birthday Party/Tom Waits mold, breaking into occasional stabs of he-man riff-rock (almost Zep-like!) and thunderous doom. I'll be investigating further...
Posted by Dave at 10:15 PM

"The worst presidency in US history"? Read up on Woodrow Wilson there...Obama is just George Bush for indie-rockers, complete with slobbering-idiot voter base; wake me up when the libertarians get in.

your blog has been on my radar for many years now and i'm filled with excitement everytime i see a new entry.

just want to give props for the mention of OXBOW one of the most overlooked bands in the world. i had no idea eugene was previously in whipping boy. amazing.

try and track down the love that's last cd on hydrahead. a bit of an overview of OXBOW but it's got an amazing bonus dvd. if you have trouble finding it let me know and i'll somehow burn you a copy.

keep it up and happy new year.

Eugene sounds like a great addition to TEN EAST - I haven't followed him musically but his good rep preceeds him. Plus, I've got a few cool issues of his '80s zine The Birth of Tragedy squirreled away around here someplace - that man's been on the right wave-length for nearly a quarter century now.

Agreed re: Carducci's Naomi. Better written and ultimately more effective than his first.

And to commenter Barry: I'll maintain the election was one of the finer days we've witnessed in the past 3 decades. Bush and his kind can eat my American shit for the forseeable future.

my pal at http://boleuzia.wordpress.com/ put Oxbow at n°2 in his favorite concerts list of 2008. Unfortunately, I missed their show although I remember some other pal of mine told me a couple of years ago that he'd seen a totally devastating gig by a band called Oxbow...