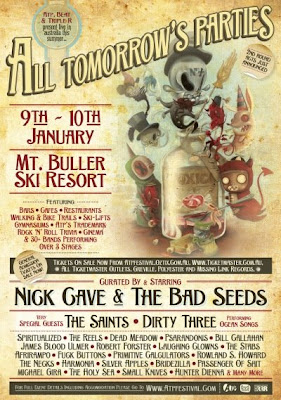 This is a pretty darn good way to start 2009. I shan't be attending the real deal - it's 3 hours outside of Melbourne up in the hills - and w/ kids it's a tough thing to organise, plus, to be honest, after Meredith a few weeks ago I came to the distinct conclusion that I'm way too old and grumpy for music festivals anymore. Still, if you're going to attend a music fest for an older, more, uh, sophisticated crowd, then this Nick Cave-curated bonanza likely couldn't be beat. The line-up is a scorcher: Kuepper/Bailey Saints, James Ulmer, Michael Gira, Necks, Harmonia, Silver Apples and load of bands I kinda know about and wouldn't mind catching on a rainy day, such as Afrirampo, Dead Meadow and Fuck Buttons. The mere concept that bands such as Silver Apples and Harmonia would be playing gigs - like, pub gigs - in Melbourne just 5 years ago would seem like a sick joke. Well, they will be, and I'll check a few of them out.

erm, does that poster say Passenger of Shit ?! wow!

You were right about it being for the oldies, I went, it was very chilled and comfy, you could've taken the kids no worries, all the musos bought their families...