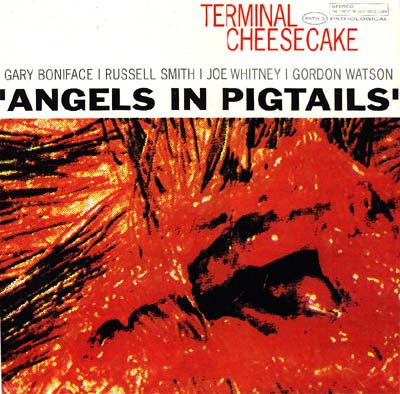 There were only a handful other records - Half Japanese, Die Kreuzen, Chrome, Melvins and Bongwater spring to mind - I liked more than Terminal Cheesecake's Angels In Pigtails ca. 1991-'92. To me, it was the bomb, the ultimate collision of heavy-duty droned-out sci-fi rock 'n' roll a la Chrome/Helios Creed, industrial sound scapes a la the Limey school of noiseniks (Current 93/Nurse With Wound/Coil) and the crunching heaviness of the Swans and the Melvins (ie - my kinda bag). I didn't actually own this; it was my brother's. It's post-Xmas time... after a family lunch, I decided to "borrow" it for a while to see if it held up. It has. If memory serves me correctly, I believe this was purchased at the time on the strength of a rave review in Flipside mag, and when you're that young and eager to hear new sounds, you take the punt. The Blue Note rip-off cover (w/ liner notes by "Nat Jerkoff"... ho ho ho) made this an eye-catcher, and I do recall that at the time the Pathological label - headed up by Techno Animal/Ice/GOD dude Kevin Martin, who's recently made his name again in the highly-praised The Bug project (well, they won Album Of The Year in The Wire, if that counts for anything) - was considered kinda hot for this brand of misanthropic noise-rock duelling, that kinda weird netherworld at the dawn of the '90s in UK music which was just catching the tail end of grindcore, where all kinds of slo-mo musical slobberings were being offered up, equal parts Black Sabbath and Throbbing Gristle. Terminal Cheesecake, if you read the Myspace link attached above, actually stuck around for quite a while; I bought one or two of their later albums 'round the 1992-'93 period (when I was in Hong Kong, of all places), and frankly I never dug 'em a whole lot, but Angels..., it still sounds mighty fine to these ears. The production has just the right level of lo-fi crunch, huge walls of Skullflower-ish guitar squawls (there's some membership crossover in the long and sordid history of both bands, somewhere), barely discernable human wails and screams throughout, occasional forays into static-laden atmospherics and near-dub basslines and even a Residents cover thrown in. It's an awesome combination of guitar-overload rock 'n' roll and non-bogus industrial gloom. Many years later, I can say once again that my taste wasn't totally rotten as a young man: Angels In Pigtails is a lost gem of UK u/ground music, and from what I can gather, it remains out of print and out of reach for the masses. Do your searching!

This album really isn't THAT rare, thanks to the miracle of internet commerce. If you really want this, look for it on ebay. It comes up for auction pretty regularly, and usually sells pretty reasonably (ie: under $20, although you will probably have to pay an arm and a leg for shipping).

You should really check out that Bug album that won album of the year. Of course it's COMPLETELY different than anything that was coming out on Pathological in the early 90s, but Kevin Martin has probably done better than anybody else from his generation at staying musically reelvant. Funny how a guy who must be close to his mid-40s now released soem of the most relevant sounds of 2008. What's even more impressive is that it doesn't smack of bandwagon jumping at all, it's more like the zeitgeist finally caught up with the musical preoccupations that Kevin Martin has been developing in isolation for 10 years or more.

Terminal Cheesecake would often get written off as England's answer to The Butthole Surfers. I've always felt there was a lot more in their bongs! They always chose the tastiest of songs to cover. They covered Flipper ("Sex Bomb"), Pink Floyd (well, kind of) AND Neu. Their last two records were trip-hop before there was such a thing. I'm very fond of the acid nightmares that are their first two records, but Angels in Pigtails is certainly a masterpiece. There is need to see all their releases back in the bins!!

Gordon Watson (of T.C.) is still active. He's droning with the best of them in JAW:

If you want to keep up with what Kevin's doing these days...

All of TC's back catalogue has attracted some interest regarding re-issuing.. So far, nothing definite but it will happen eventually. The link between Skullflower and the band is that after the first 3 Lps , I ( Russell Smith) left and joined Skullflower for a few years and about 7 or so albums.
Fantastic to read such appreciation nearly 20 years later..