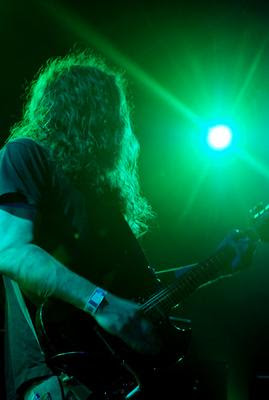 Dang... back from tour and no outright disasters to report. No tour diary here, you can ask the guys from TEN EAST for that. I only have a few thankyous to throw out there: Luke and Kelsey, Lou Ridsdale, Woody, Tim Scott, Al and Dylan and Chops and all the good folks at the National Hotel, Dave Batty, Ben Wrecker, Russell Hopkinson, Ray and Blackie, Soph and Ash, Karen and Ryan and... I think that's it. And all the good folks who showed up. Despite my sleep-losing nerves regarding the whole tour, it was, except for the woeful turnout in Sydney (they had more payers in Geelong than our most populace city: go figure that! Sydney, you suck, truly), a smashing success for a first tour, and I actually didn't lose my shirt on the whole thing. Well, I lost my pants, since Gary Arce took a shine to a certain pair of denim jeans I used to possess and made them his own, but what the hey. The Meredith festival was a total washout - literally - but everyone had a blast, including me. To Gary, Bill, Bryan and Billy: thanks for the fun times.

Year-end round-up time, just like every other schlep on the planet. There were tons of great records released this year, and I heard practically none of them, but the good ones I did hear are listed below. My head remains in the sand most of the time. I have neither the time, money nor inclination to hear all the hip 'n' happenin' records people tell me about. These are the ones I gave an earload.
AUSTRALIAN:
BEACHES - s/t LP/CD (Mistletone)
Debut album from this hot-hot-hot as tar 5-piece all-female outfit from ol' Melbourne town. I've seen 'em live about a dozen times and this gem does 'em justice. I'd say they capture a sound somewhere in the universe of Goo-period Sonic Youth and Pell Mell. I doubt they've ever heard of the latter (I'll make them a mix tape), but that's my summation, since their instrumental jams possess an awesome psych-surf vibe which no one else, barring perhaps Yawning Man, have come close to. Naturally, YM/Ten East's Gary Arce was enraptured during the two performances of Beaches he witnessed down here. My hit pick for world domination in '09.
OOGA BOOGAS - Romance and Adventure LP (Aarght!)
I spoke of this just recently. Scroll down and you'll find. A whoppingly good effort from this local bumhole engineers.

EDDY CURRENT SUPPRESSION RING - Primary Colours LP/CD (Aarght!)
Never really mentioned this one all that much. No need to when everyone else is! Some like their debut better, but I think this is an improvement on their first LP and they certainly made no effort to slicken their approach. Probably the most bizarre and unexpected semi-mainstream hit of '08, the fact that these guys can pack out a 700+ venue in a heartbeat is... uh.... an odd one. The backlash will probably hit soon, but since ECSR really don't give a fuck, I don't see why I should.

SAND PEBBLES - Ceduna CD (Sensory Projects)
Again, I mentioned this one a few entries ago. First-rate psych-rock dementia from a bunch of old gits, I'm shocked that practically no one from overseas has ever heard of these guys.

HOTEL WRECKING CITY TRADERS - Black Yolk CD (self-released)
Only in catching this local two-piece live did this CD make perfect sense, and really, now that I've played the thing three-dozen times and love the shit out of it, do I feel stupid for not really "getting" it beforehand. HWCT are one drum kit and one guitar: two guys jamming out a heavy, dissonant din heading for the stratospheres in a weird kinda post-metal universe. You can throw around names: Isis, Melvins, Pelican, Sunn O))), Jesu, Big Business and, yep, Ten East. They sound a little like all of the above and whole lot like themselves. I'm now convinced they're one of Melbourne's hardest-working and best-kept-secret juggernauts I'll be dragging my friends along to see in '09.

This was written about 'round here in the half-year mark. Local two-piece made good who completed a successful US tour and won over hipster douchebags everywhere they went. Tribal post-punk broohahah from a coupla young folks w/ some Rough Trade vinyl in their closets. A lotta people in the 21st century try this schtick and fail. FB don't.

Latest from this Austrian egghead sound artist much loved by Australians ever since he first touched base w/ a certain Mark Harwood a decade back. More stripped back and glacial than anything he's done before, this is an exceptional late-night meditative listen.

GRUPO FOLKLORICO Y EXPERIMENTAL NUEVAYORQUINO - Concepts In Unity CD (Clave Latina)
I know nothing of this release. It's a bunch of Cuban and Puerto Rican musicians striking a jam in NYC in the mid '70s and enjoys a healthy cult following from all lovers of rhythmic get-down-and-party Latin music. It was re-released by ther Spanish imprint Clave Latina a few months back and a friend drew me to its general direction. For some stupid reason, up until a year or so back, I dismissed most Latin music as "cheesy" and possibly not my bag. I was wrong, of course, and I'm on a new kick: point me towards the latest mind-blowing Latin ramalama mindblower reissue from yesteryear and I'm anybody's.
FLIPPER - Generic Album Flipper/Gone Fishin'/Public Flipper Ltd./Sex Bomb Baby CDs (Water)
Four of the greatest albums of their age - of any age - get a sorely-needed reissue from the finest reissuers on the planet. Now I can finally play these things in the car...
JOEL GRARE - Paris Istanbul Shanghai CD (Alpha)
The Alpha label usually specialises in all kinds of worldly pre-Renaissance music, the kinda fruity stuff my macho rock pals give me grief for listening to, and it stands as one of my favourite labels on earth. Let's take it outside and we'll punch on if you please. This release is a slight detour for the label, with modern composer Grare - influenced by everything from ancient Oriental music to fiery French sci-fi-rock behemoths Magma - and his ensemble dishing out an intoxicating mix of ethnic percussion and abstract, other-worldly sounds from centuries past. You'll dig it or you'll run for the hills. I like this stuff. A lot.
ASAD QIZILBASH - Sarod Recital: Live in Peshawar CD (Sub Rosa)
A recent live recording of blissful sarod drones from this Pakistani master on the ever-great - and never predictable - Sub Rosa label.
VARIOUS - Dr. Boogie Presents Shim Sham Shimmy LP/CD (Sub Rosa)
Written about on this blog many months back - or thereabouts - this is the second volume in Sub Rosa's archival Americana blues/R & B/hillbilly/boogie-woogie series, and remains the best collection of rough-assed electric blues stomp from the '40s released the last 12 months.
JAMBANG - Connecting CD (SST)
Greg Ginn hits the jamband scene! This CD is a whole lot better than that sounds. Think Wooden Shjips jamming it w/ the 'Dead and Spacemen 3. Most of all, don't think "Six Pack", the guy's moved on.
DUNGEN - 4 LP/CD (Subliminal Sounds)
The finest '70s Euro art-rock album recorded and released in the year 2008, this album is so good, and so convincing, it staggers me. Fucking impeccable. Really, if you dig Amon Duul 2, Eno-period Roxy Music, Scott Walker's monumental first four LPs or The Move the way I do, then passing this up ain't an option. I'm late to the party, but I'm mighty glad I came.
AWESOME COLOR - Electric Aborigines LP/CD (Ecstatic Peace)
The best Funhouse-period rip-off band I've heard since, like, you know, ever! My brain turns itself off these days when one recommends me a band "heavily influenced by The Stooges", so much so you had to practically force me Clockwork Orange-style to get me to listen to this. That Stooges/MC5 mimickry was all the rage back in the '70s/'80s, ya know, but if ever there's a genre butchered beyond all recognition and inspiration, it's good ol' Detroit, and I say that as a man who'll swear by Stooges/Funhouse/Raw Power/Kick Out The Jams/Back In The USA/High Time 'til the apocalypse hits. Awesome Color get "it" right. No macho swagger and no cock-rockin' good times; it's psychedelic weirdo freak-rock w/ a kickstart rhythm and a heart full 'o napalm. Whatever the case, this release made me feel that balls-out rock 'n' roll, in the year 2008, still wasn't a bad idea at all.
PHILIP JECK - Sand CD (Touch)
The latest and not greatest from this UK sound/tape/collage artist. Like everything the guy's done, this is worth a shot, but for true brilliance I recommend his Surf album from the early '90s. For some reason those Limey anus-scrapers at The Wire voted this the second-best album of 2009. Go figure. I must be missing something. Still, this remains one of the finer things I heard in 2009.
GORE - Hart Gore/Mean Man's Dream CD/LPs (Southern Lord)
Check down a few entries. Minimalist instrumental metallic dirges which never age.
VARIOUS - Nigeria Rock Special: Psychedelic Afro-Rock and Fuzz-Funk in 1970s Nigeria LP/CD; Various - Nigeria Disco Funk Special: The Sound Of Underground Lagos Dancefloor 1974-1979 LP/CD (both Soundway)
UK label Soundway (currently on summer hiatus as the owner treks around Australia) has raised the bar in regards to obscure African discoveries from years gone by, and one listen to either of these releases will convince even the most staid, boring and socially-challenged rock purist of that fact. One is kinda funky, one is kinda rocky, though let's face it, many of the tracks could be interchangable for either release. They both rock out in a funky way, and remain essential.
... and that's not counting the two-dozen releases I've forgotten about! That's my musical roundup for the year, perhaps in a few days I'll attempt to tackle some other issues from '08 clawing my brain. Adios...
Posted by Dave at 9:08 PM

Yeah, and that last comment has been amended, so calm down, fuckhead

Yeah but: did TEN EAST wallow in long, distended jams, or leap though tight, progtastic song motion? Did Gary wail? And who's the bassist in the photo? It don't look like Ginn. Inquiring minds wanna know!

Hey: you going to any of the ATP concerts in the new year curated by Nick "droopy mustashe" Cave? THE SAINTS and JAMES BLOOD ULMER are gonna cook - and ROWLAND HOWARD's crawling out of his Hep C cesspool to play! It'll be good, I promise.

Ten East did a bit of both: short and fast, long and slow. Check out their MySpace site for tons of photos and reviews from the tour. The bassist is Billy Cordell, Yawning Man/Unida dude and standup gentleman.

I'm not going to the ATP festival itself (it's 3 hours out of Melbourne up in the mountains; after the tour, I can't be bothered w/ that), but I'm seeing some sideshows: James Ulmer, Michael Gira and The Necks... maybe more. The Saints are doing a sideshow playing the whole "Stranded" album which I'm tossing up going to see.... but I dunno. It could be brilliant or terrible.

Some exciting news re: Ten East and a possible vocalist... not sure if I'm allowed to announce it, though.

just a note to say thanks for your kind comments - and check out Harmonia on their ATP sideshow if you get the chance - I'm tipping it'll be a revelatory krautrock moment...

I don't know Ten East so I didn't go, but if Yawning Man was a real man, I'd marry him!

Oh and, Harmonia weren't that great at atp... meh.