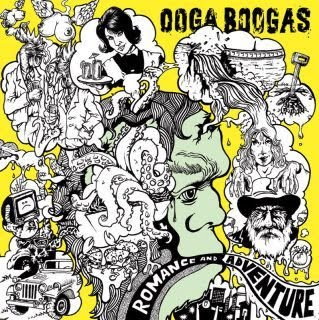 OOGA BOOGAS - Romance and Adventure LP (Aarght!/2008)
Stranger things have happened, but somehow these local no-getters have managed to crawl their way to near the top of the pile the last 6 months. Collect together the scraps from such outfits as The Sailors, Onyas and Eddy Current Suppression Ring and you get a quartet known as the Ooga Boogas. In the last 12 months, purely from their own hard work (really!), they've released a 7", toured the US and even put out a self-released vinyl-only LP on the Aarght! label. I know these guys well, even played, ever-so-briefly, in a band or two of theirs in years past, but if I thought they blew I'd ignore them. Wouldn't even go to their gigs. Certainly wouldn't give this a spin. Which is not the case. Firstly, that cover! Gatefold, thick stock, ace graphics from percussive bandit Per Bystrom (I'm impressed by his renaissance-man skills, honestly), and a truly hideous photo of the band in the gatefold. Nice. I was given a CD-R of this release months and months ago and played it half-a-dozen times then, like most CD-Rs, lost the thing. I dug it, and the first thing that struck me was how little it sounded like the band live. In the flesh, the 'Boogas are deadpan, occasionally coma-like and crystal-clear in their musical attack. Zero distortion in the guitars and an ass-tight rhythm section make 'em a curious beast. I told 'em the first time they played that they were the only band I'd seen who truly reminded me of Crazy Rhythms-period Feelies: all herky-jerky beats, extended jams abetted by Reed-y twangery w/ a real geekoid punk-rock energy. I expected the same here, though I guess the recording process, which judging by the rawness present within, involved a 4-track and a toilet bowl, has the band sounding like something completely different. For one, the guitars contain actual, gen-u-ine fuzz. You don't hear that in an Ooga Boogas live set. What this sounds most like is, uh, a late '90s In The Red band. I'm stretchin' here, but I'm a-thinkin' Cheater Slicks meets the Necessary Evils. Or something in that orbit. Not a bad place to be. I've spun this LP - now "out of print", apparently (they only pressed 500 and have been teasing the masses about leaving the pressing at such for "collectable reasons") - a good dozen times the last week and I think I like it more each and every time. The lyrical matter features the kind of inane twaddle possibly lost on most folk, such as the Bermuda Triangle and its greatest mystery (that mystery being why it has disappeared as a curio item the last 20 years as its deadly powers have dissipated... after a few drinks it's pretty amusing, believe me), and the music is a very cool mix of the short and sweet (the opener, "Ooga Booga II", has a rather terrific Can Of Bees-period Soft Boys boogie-beat happenin') and the elongated jam-band length (most notably the two songs which round out both sides: "Ooga Booga I" and "Kiss Your Rocks Goodbye", the two best songs here, I say). Even what I thought to be their worst song, one I told the band to drop from their set some six months ago coz it "sucked", sounds good here. That song is "Fannie Mae". Second song here. Sounds good to me. It all sounds good to me. You fucks. I should hate you for it. You've made a more-than-fine LP and every douchebag in town will kiss your buttocks for it. Enjoy it.
Posted by Dave at 1:35 AM

OOBA BOOGAS: I Like It Like That!
Got an email from Rich telling me that the band already ordered a repress on pink vinyl.!!(first press was on black). Should be ready by the end of the year. Is everybody HAPPY? Me DEFINITELY 'cuz I'm a Johnny-come-lately as far as the OOGA BOOGAS ...!!!