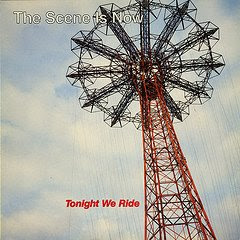 The Lexicon Devil reissue of this li'l mini-classic, Tonight We Ride by THE SCENE IS NOW, fully remastered by the band, will be out November 1st. A swish package w/ a 12-page photo-filled booklet and liner notes by a certain blowhard known as Dave Lang. Read 'em and weep...

"I first heard of the band known as The Scene Is Now in 1989 when I read a review of their Tonight We Ride LP, penned by the great James C., in issue 23 of B-Side fanzine. The review in question had my curiosity piqued. Early in the lengthy piece he made allusions to Mellencamp(!) and Springsteen(!!) in regards to the band's ability to pen seemingly "straight" rock/pop tunes, yet as the review progressed he then began to note that the band's apparent simplicity was disarmingly deceptive and that repeated listens brought to light a group of great uniqueness. His summation at the end of the first paragraph put it perfectly and succinctly: "...by the third song, "Full Fathom Five", you start to realise that you've become involved in something VERY ODD INDEED...". After listing a motley crew of TSIN's cohorts (Fish & Roses, Chain Gang, Mofungo), he ended the review with this line: "You probably won't find any of their recs in yr local store, but you'll be missing out on some of the most unusual and best US crap being put to vinyl these days. Do what you know you must".

"I did: two years later when I discovered a copy of Tonight We Ride for $8 in the sale bin at Exposure Records. The first time I took it home and put needle to vinyl, it made perfect sense. There were no shortage of pop hooks interspersed among what at first appeared to be a seemingly straight-playing rootsy indie-rock album, but then the magic of the band's unique interplay took hold. Guitar lines weaved randomly throughout, keyboards came to the fore at unexpected moments, and, despite the fact that much of the material sounded like two bands playing at once, pulling at times in opposite directions, each song came together at the right moment to deliver a knockout punch. I tried to think of comparisons, and the ones I came up with, I later found out, had been used many times before: Slovenly, Red Krayola, Beefheart, Pere Ubu, The Feelies. I announced them to friends at the time as the great post-No Wave harmolodic pop band. After all, somebody had to be. No one would listen, and the cult of TSIN remained a well-kept secret, even if Yo La Tengo did record an old songs of theirs.

"By 1995 the album had become such a stalwart favourite that I wrote about it in the fanzine I was producing at the time, Year Zero, in an article detailing the top 10 LPs I would take to a desert island. Alongside the likes of iconoclastic faves of the time (and now!) such as Die Kreuzen, Chrome, Minutemen, Electric Eels and MX-80 Sound, I noted that the music of TSIN may shock some listeners who believed I only wanted abrasive racket in my audio pleasures. I said something dopey along the lines of "the music of TSIN probably won't upset your average Fleetwood Mac or Eagles fan", but then noted that such a comment was only meant to imply that TSIN wrote great pop songs. Indeed they did, and still do.

"TSIN were formed from the ashes of NYC No Wave outfit Information by Chris Nelson and Philip Dray at the dawn of the '80s. They went on to produce three albums in that decade - Burn All Yr. Records, Total Jive and 1988's Tonight We Ride - and to me they demonstrate a brilliant evolution in sound from one of the great unknown bands of the era, a three-disc evolutionary bender from ramshackle beginnings to slick songsmithery and musicianship rivalled only by the Meat Puppets. The former two will be reissued by Lexicon Devil in due course throughout 2009 (don't ask me why I'm going backwards; perhaps it's because their third LP is the most accessible of the three), and are musically much different, and perhaps more abrasive, affairs. Added to the band for Tonight We Ride were ex-dB Will Rigby and Tony Maimone from Pere Ubu. The sound was much more streamlined but still unmistakably The Scene Is Now. It's the band's combination of the avant-garde and the traditional which makes them so special. The fact that the band can claim influence from the likes of Bob Wills and Hoagy Carmichael, as well as Sun Ra and DNA, speaks volumes of their synthesis of disparate influences. I always thought their sound encapsulated that wide-open-space Americana sound many reached for, even a picturesque midwestern-cornfields vibe, though now that I listen to it again, and ogle the Coney Island photos the band just sent me to accompany the booklet (taken the same day as the front cover), I see their sound as pure east coast, even urban. Or perhaps not. Now I'm just confusing myself. I'm reminded of family summer holidays in Coney Island and yet I've never even been to the place. TSIN evoke a sense of old-time romanticism in me. Their oblique lyrical references, which include lines taken from Shakespeare, and occasional forays into right-on political radness, make them a curious beast indeed. The comparisons have been made, yet there remains no band on earth like The Scene Is Now. It's 17 years later, I'm now reissuing the thing on my own label and it still sounds so goddamn good. Enjoy."
Posted by Dave at 4:29 AM

This is fucking great news. Can SLOVENLY remasters be far behind?

Uhh... Slovenly reissues may be a little further off, or not happening. In "negotiations", but I will make no promises!

"Total Jive" and "Burn All Yr. Records" will be out in 2009, definitely within the first 6 months. If they go well, I may even ask the band if I can reissue their cassette-only release from '91, "Shotgun Wedding", onto CD. Ever heard that one? It's a goodie!

Not heard Shotgun Wedding, but well aware of it. Was very happy to find Songbirds Lie at Missing Link on the weekend. I think some Mofungo reissues are in order. And make sure those Slovenly reissues happen!

You can download it - legally - at itunes, Amazon etc.