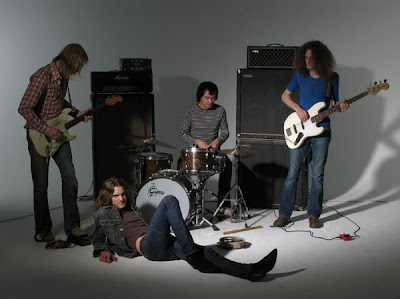 Fugg this blog sabbatical shit when one hears an album this good. I just have to tell you about it. Never mind the fact that I also happen to work for the company which has licensed this album for Australia. That's not relevant. I only like to waste my time and yours in telling you about the good stuff, the records which moves your loins, put ants in your pants and make you wanna dance. And in this case, this album makes me wanna boogaloo 'til the cows party on down. Or something like that. I'm speaking gibberish. Maybe I've lost my mojo w/ this blog-writing, or perhaps I shouldn't've just swallowed that last glass of red... Don't take this as a press release. Frankly, I don't care if you do. I'm clocked off and not getting paid for this rant. The band is DUNGEN and they're from Sweden. The album is 4. They're an underground phenomenon who went almost semi-overground Down Under a few years back. They release the goods on the awesome u/ground Swede imprint, Subliminal, but somehow or other caught the attention of the folks at Ivy League (kinda faux-indie label linked up w/ Universal or something) w/ one of their discs mid-decade, had it licensed and toured the country in support of Wolfmother (Yeah... them!! Then again, Ten East supported 'em on a bunch of German dates last year, so, for a bunch of no-talent douchebags, I can't fault their choice of supports), but have now returned to true indiehood w/ this. That's the background. All you need to know is that Dungen is Swede wunderkind, Gustav Ejstes, and whoever else he feels like bringing to the party. They are unashamedly "psychedelic" in a tributory fashion, but they pull it off better than anyone else in recent memory. They sound like the ultimate Euro art-rock band plundering the best audio vaults of the '60s and '70s. I'm talking about art-pop shenanigans butchering the likes of The Move, Amon Duul 2, Syd's 'Floyd, Eno-period Roxy Music, SF Sorrow-era Pretty Things, Scott Walker, Marc Bolan and all those other continental faves which probably made life bearable back in the late '60s and early '70s. 4 is flat-out one of the best albums of the year of any genre, and I feel like a putz-and-a-half for having only given the band the nod in the last 6 months, ignoring the pleas of friends to lend them an ear those years ago when I figured them to be a flash-in-the-pan load of Nordic blowhards riding a wave of undeserved success. I am eating my words. This record has reminded me, just at a time when I need it, why I have wasted my adult life w/ all this music shit. My faith has been restored.

Who was James C anyway? And what has he done since B Side? I always did enjoy reading that mag.

I met James once about 15 years ago at a gig and was surprised by how YOUNG he was (he was in high school when he wrote many of those B-Side pieces). My pal Jon Dale thinks he lives in New Zealand these days and is still involved in some sort of musical scene, apparently. Kinda weird that he wrote all those great things over 2-3 years then just totally disappeared. The guy had talent!