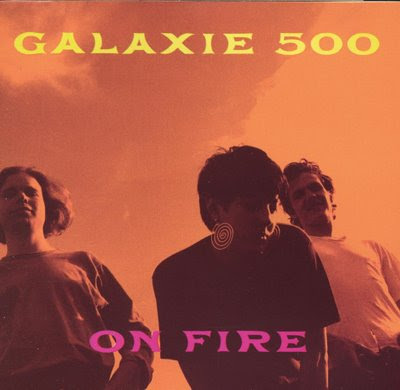 The fact that I've been listening to this album, Galaxie 500's On Fire CD from 1990, is a slightly odd turn of fate. When it came out it was licensed to Festival Records down here (from Rough Trade/US, just before it went bust), and Festival, in attempting to push shit uphill in the pre-grunge landscape, did at least give 'em a push or two. I saw a clip on Rage a couple of times, but that was about it. The band barely registered a blip on the radar of the general public, nor mine. I only knew about 'em (or vaguely cared) because of the Kramer connection - he produced this - and because they had some tracks on various Shimmy Disc comps at the time (most notably the super-ace Rutles Highway Revisited LP). I guess being a bunch of American fops didn't sit well w/ most people at the time. That was left to the Limeys. So, it's 18 years later, Damon and Naomi are somewhat certified u/ground elder statespeople w/ a swag of (apparently) great albums under their belt and Galaxie 500 are now hailed as a "classic" band by some folks I know, a sorely-missed outfit who criminally never went anywhere in their day yet whose recorded legacy moves mountains. Kinda the same shit I rave about in regards to bands such as Slovenly, Pell Mell or The Scene Is Now.
I bought this CD secondhand about 6 months ago for no particular reason. It was there on the rack - cheap - and I had not thought of the band much the last decade. I heard most of the album back in the day on the radio or at friends' places, but that was it. It's fitting in perfectly w/ my current love of middle-brow u/ground rock which doesn't tax my brain too much and doesn't upset those around me. I'm talking Pell Mell, Feelies, Cul de Sac, et al. No Drunks With Guns or Peter Brotzmann for me right now. I'm comfortably slipping into a rut of musical niceness and melodies for the time being. You can call Galaxie 500 "shoegazer" if you will; it won't upset me too much. The barely-registering pulse of the music, all slo-mo guitar strums and kinda on-the-mark vocals, are a bit like "Sweet Jane" on cough syrup for 45 minutes. There's a nice cover of George Harrison's "Isn't It A Pity" at the end, and Kramer's patented production style - you can hear it in the bass sound and guitar licks - lends this a slightly wintery, off-kilter feel which is a perfect late-night listen when one's brain is fried and wants to be horizontal. On Fire hasn't changed my life one iota, though that's not the criteria I require to hang onto it.
Posted by Dave at 6:59 PM

Great record... I too brushed over this band at the time and pushed it aside for the grunge/noise era. I found a cheap vinyl copy about 8 years ago and was quite surprised how amazing it sounded. These Rich college brats seemed to get the art just right....