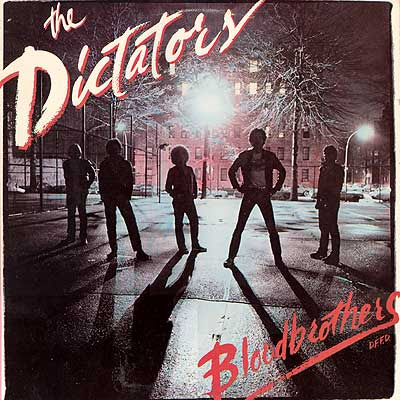 Nothin' like some brainless thud-rock on a sunny afternoon, but then again, the Dictators perfected the art of stupid-as-smart dunce-rock better than anyone back in the day, so don't think for a second I'm actually accusing these guys of being bonafide knuckleheads. Some friends of mine are kinda surprised when I announce my keen Dictators fandom, as they figure them to be the type of band who wouldn't appeal to an egghead boffin such as myself, but it's good to always keep 'em guessing.
When Au-go-go reissued their debut, Go Girl Crazy, on LP back in '89 (was it '89? Maybe late '88?), my brother bought it upon the day of release and it very quickly became a Lang household fave. It was dunderhead rock of the top shelf variety. Somewhere along the road of the next decade, I, too, bought myself a copy. Then I found myself in New York in the summer of 1999. Playing at Coney Island High - ironically, a venue in Manhattan, not Coney Island - that week was the Dictators, supported by Ronnie Spector and Joey Ramone (and, unannounced, headlinging over the Dictators were Murphy's Law(!!!), but that's another story). I was there. I succumbed to the thunder of Manitoba. And left when it became apparent that the music of Murphy's Law inspires their audience to want to kill each other with their fists and feet.
So now it's nearly a decade later and I have finally landed myself a copy of their third album, from 1978, Bloodbrothers, which has been reissued by the Wounded Bird label. A little while ago, when reviewing the Dead Boys' second album, the highly under-rated We Have Come For Your Children, I remarked that the NYC punk scene of the 1970s had a bad strike rate when it came to sophomore albums. I also remarked that the second album by the Dictators, 1977's Manifest Destiny, wasn't half bad. I was wrong. I have played it the last week and it's a clunker fully worthy of its rep as a turd in the band's discography. Why on earth they decided to release such a leaden, uninspired hunk of wannabe AOR rock right in the height of the punk explosion remains a bit of a mystery, but at least they corrected their misstep w/ this ace follow-up. The production, by longtime buddy and BOC third-wheel Sandy Pearlman is rough as hell and perfectly suits the rambunctious and surprisingly uncommercial nature of the music. The Dictators were caught in no-man's-land at the time: too "rock" for the punkers and too "punk" for the rockers. Their sense of commercial suicide was everyone's else gain. The opener, "Faster And Louder", is a blazing heart-starter which sounds like it's semi-ripped a riff or two from the MC5's "Call Me Animal", and from then the action never stops. "Baby Let's Twist" is hot AM pop put through a Detroit blender (w/ a riff later stolen by Turbonegro); "The Minnesota Strip" has a descending metalloid guitar line which I swear has been stolen from someone else (Iron Butterfly??!!); and the big-chorus non-hit of "Stay With Me" has me thinking but one thing: every single song on this album has been pilfered by someone else in the last 30 years, and yet half of the songs the Dictators ripped off elsewhere! Is any of that a bad thing? Nope, not by a long shot. That's what makes the Dictators such a great band: it's a peculiar brand of rock made by and for fans. It's not fan-boy rock, even though the band was birthed from the geekoid fanzine scene of the early '70s; it's music willingly open to wear its influences on its sleeves - Stooges, MC5, Beach Boys, The Who - yet it never comes across as smarmy or an in-joke only for those whose record collections have reached a particular girth and dimension. Speaking of influences, there's a hot, hot, HOT cover of the 'Groovies' "Slow Death" which closes the album, in my opinion the best ever version of the song put to tape. Bloodbrothers doesn't need any kind of reappraisal - most fans dig it anyway - though it definitely needs more people buying it and hearing it. It remains a dynamite collection of late '70s east coast punkaroo rock 'n' roll.
________________________________________________

OTHER NEWS: If anyone cares, the Lexicon Devil CD reissue of THE SCENE IS NOW's uber-masterpiece (a Top 10 Desert Island Disc for moi, ya know) Tonight We Ride LP from 1988 will be out in a couple of months, as I'll be getting the (re)master in a week or so. Hopefully a swish package w/ liner notes by Jon Dale, myself and whoever else I can rope in. There will also be an album before the end of the year by YAWNING SONS, which is Gary and Mario from Yawning Man playing w/ UK instrumental doom-rockers, SONS OF ALPHA CENTAURI. I've got a rough mix w/out various overdubs, and already it sounds like an excellent combination of, oh, I dunno, Yawning Man's surf tendencies, Slovenly, early Sonic Youth and the more whacked-out end of Syd-era 'Floyd. Should be ace. Keep yer ears peeled.
Posted by Dave at 8:04 PM

Weren't the first 3 albums going to be reissued???

Dave: This is a great review, and just the kinda rec more eggheads oughta be pointing their viscous antennae toward. And put out by Wounded Bird: home of more 70's shit rock reissues than any other label in the USA. My word.

Weird thing is, given my westcoast misunderstanding & conflation of all things NYC . . . Jimmy Gestapo of MURPHY'S LAW might as well be the illegitimate turd son of Handsome Dick Manitoba. In my mind, the pairing ain't so off the mark.

I will be reissuing the first 3 TSIN albums, though first up is, funnily enough, their 3rd. It's just worked out that way since I think it's their best and most accessible. Putting the 3 of them out at once would just be too much to ask. They'll be staggered, which means the other two will come out early next year.

Michael: Wounded Bird... man, what a crazy/bizarre/incomprehensible catalogue! There appears to be very little rhyme or reason to what they do, but there's some real gems in there: Alan Vega, Alice Coltrane, Dr. John, etc. The company I work for does the label down here, and it's been a treat going through their catalogue the last few weeks, though you gotta dodge some nasty bullets there (such as a Roger Daltrey album from 1987 I actually sat all the way through, and a mid '80s Phil Lynott record w/ "special guests" Mark Knopfler, Midge Ure and Huey Lewis! ). OUCH!

great rekid that 'tonight we..'
how did ja end up deciding to reish that? i use to play that record on my show at pbs a million years ago. i only get to sometimes hear their stuff on wfmu now because rrr and pbs are sooooo boring...jeez.

Matt: how did I decide to reish it? Dunno, just always loved it - for 17 years now! - and the opportunity was there, since no one else was doing it. Taking it to the printers this week, in fact. Glad smeone else local has actually heard of it!