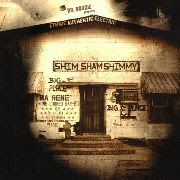 DR. BOOGIE PRESENTS: SHIM SHAM SHIMMY
The second volume in Sub Rosa's Dr. Boogie series from their new roots imprint, Fundamental... The first, from last year, dug through the vaults of Canned Heat fat-guy/vinyl fiend/vocal warbler/party animal, Bob Hite, and gave us all an ace collection of tracks by the likes of Elmore James, Bill Haley and others. It was a mix which made my Top 10 of last year, if that counts for anything (and I ain't saying it does!), though this one trumps it hands down. Belgium's Sub Rosa, one of my absolute fave labels on the planet, usually deals in all things electronic, avant-garde, Dada-esque and "ethnic", though they're doing everyone a favour by opening the vaults and compiling party-starters like this. Not really sure what the given theme to this mix is - the liner notes, by "Dr. Boogie" himself - tell some sort of story of artists from the South who electrified their instruments between the years 1945-'50 and pioneered a whole new style of boogafying shim-sham-shimmy, and whilst there's a zillion albums out there telling roughly the same story (especially so since public domain laws in Europe have made this late '40s hard-assed R 'n' B omnipresent amongst reissue labels the last 5 years), I've not heard one as good as this. And, believe it or not, I have actually listened to a lot of this stuff the last half-decade.
When a friend, just the other week, asked me what I thought of this album, I sarcastically answered back w/ a "Maaaaate, best gutbucket blues comp' ever!". It's not like the sentiment was BS, but I used the term "gutbucket" coz it seemed like such a cliche used by blues afficianados, and yet such an accurate term. I hereby name this shit the best gutbucket blues collection of tunes of the last 12 months. Gutbucket? I don't think Wikipedia has made an entry yet, so I'll define it: raw, gutteral and untamed by commerce or social grace. Every track here sounds like it was spat from the mouth of a deviant and recorded at the back of a toilet block. Even folks who later etched out careers as well-mannered guitar-slingers of the Miller-lite variety during the Reagan years, such as Albert Collins, contribute songs of greatness here (though I should note that lately I've been bowled over by hearing some old BB King cuts from the '50s, realising just how great the guy once was, an admission which woulda killed me 10 years back considering how much he disgraced himself by buddying up w/ Bono and co. back in the '80s). The oddest track is undoubtedly Slim Gaillard's "Fuck Off", an utterly bizarre near-a'capella number w/ Slim making chicken noises which one slowly starts to recognise as a subtle bleeting of its title. Not necessarily "great", but a true oddity of its time. Cussing aside, there ain't a dud track present, and there's 30 of 'em! Champion Jack Dupree's opener, "Shim Sham Shimmy", a no-fi stomper which coulda been recorded yesterday (it wasn't), sets the pace for song upon song of desperado genius. Artists? Joe Hill Louis, Ramblin' Hi Harris, Bobo Jenkins, Moses Williams, Jake Jackson, Eddie Snow, Guitar Slim Green, etc. I ain't ever heard of any of 'em, but I'm here to learn. Lonnie Johnson? I know him. He's here. Song titles: "I'm Gonna Kill That Hen", "You Better Heed My Warning", "She's Taking All My Money", "Screamin' 'n' Cryin'", "Life Gets Hard", etc. Eddie Snow's "I'm Off That Stuff", in which he proclaims his freedom from booze, drugs and bad women, is my personal pick of the litter. Primitive as can be, Snow barks his lines out like a caveman. As always, a slick package from Sub Rosa (now also released as a 2-LP set, for you vinyl geeks), and I can only hope that this is merely the second release in a long line of 'em. Like the inside cover says: put a nickel in the juke and boogie 'til you puke.
Posted by Dave at 6:56 PM

Awright! Sub Rosa gettin' down and dirty with the best of em. I can dig that. Must scratch this one up fast. Thanks for the tip.

Indeed an essential collection! Sub Rosa never ceases to amaze me, the Anthology of Noise & Electronic Music volumes are amazing too!
JSP has just released a 4cd box set called "That's What They Want' Jook Joint Blues: Good Time Rhythm & Blues 1943-1956" which I think - should be killer too according to the track listing: http://www.hbdirect.com/album_detail.php?pid=989033