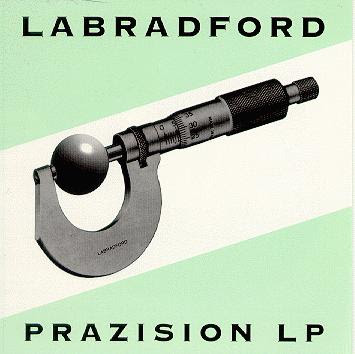 Bought this one - Labradford's Prazision CD on the Kranky label from 1994 - when it first came out. I hailed it in print at the time as a masterpiece. Flawless. An incredible mass of work. I'd never heard anything like it at the time. The mixture of star-bound soundscapes, stillborn atmospherics and quietly evolving acoustic tunes blew my head clear off. Mind you, this was just before I discovered the likes of Cluster, Neu!, early (good!) Tangerine Dream, Eno's mind-melting run of ambient albums from '75 to '83 (start w/ Discreet Music and work yer way up to Apollo: you'll be so glad you did) or even Spacemen 3 beyond a track or two (I found it simply impossible to believe at the time that Britain was actually capable of birthing a rock band worth listening to in the previous decade). Perhaps that explains my growing disenchantment w/ the band throughout that decade. By '96, at which point I had discovered all of the above and flayed them high 'n' dry, Labradford couldn't get arrested in my household. I'd bought their subsequent two albums, 1995's A Stable Reference and '96's self-titled effort, and... I liked 'em OK, though the dent they made just couldn't compare. Seemed like way too much water-treading, and besides, at that point in my life I was much more keen on listening to Agharta or Space Ritual or an early Marc Bolan outing than anything I would blithely dismiss as "indie-dork music".
Even saw Labradford play here in '00 or '01. Damn near put me to sleep. And so now I play this CD, just as I have been quite a lot the last month. The ten-year gap between listens has served it well. Rather than melting my brain at this point, this now strikes me as a quaint piece of nostalgia from the period, a time when post-punk indie schlebs finally discovered the joys of music which in many ways didn't "rock" in the slightest. I was right there w/ 'em, fightin' the good fight for about two seconds before I realised the huge chunk of bands who immediately followed in Labradford's wake (this disc was pretty big news in a miniscule way at the time) were simply busy establishing another boring cliche I very soon tired of. Still, I'll give it to 'em: this is a supremely crafted album, from the distended electronic pieces such as the opening track, "Listening In Depth", which glides along like a scene from 2001, to the more song-based pop lushness of a track like "Soft Return", a near comatose opus w/ a hook. I couldn't fault this as a record if I tried. And, being the crotchety old fuck that I am, lord knows I tried. We have a verdict: like it or not, this is a classic.
Posted by Dave at 3:41 AM

You are one hardass for sure Mr. Lang. Will you be as kind to Dungen in 15 years?
As for the here and now... do you know about Wrnlrd?