A bit too busy for this blog of late, and right now I've got bigger fish to fry (more on that at a later date), but I will attempt a quick spiel on what's floating my boat of late...
When I published a list of my fave releases of '06 here a couple of months back, I got a response in the (now-defunct) comments box from a chap who recommended I check out Ten East's LP, Extraterrestrial Highway. Describing it as SST-style instrumental jam-rock of the non-douchebag variety, he was sure I would become a fan of its wares. Well, "he's" right. Funnily enough, I haven't bought the thing yet, but was sent a CD-R of the record by the guitarist, Gary Arce, last week. Gary used to be in the SST band, Sort Of Quartet, and is also a member of The Perfect Rat (who comprise of Sacc' Trust's Jack Brewer and Greg Ginn on bass[!]) and Yawning Man, but more on them in a minute. Ten East, strangely so, also feature Brant Bjork (Kyuss/Fu Manchu) on bass, so I guess they have a bit of marketable semi-rock star baggage to give them a push, though I'm not really convinced their psychedelic, instrumental jamming will light the fires of stoner-rock fans worldwide. For one thing, the songs are long, though they have a distinct sense of direction which moves them along and never has them getting lost in the process. You can hear some of their music on their MySpace site I just linked you to. I'm no audiophile, though I'm still of the opinion that compressed sound files on web sites don't do a good band justice. Still, you be the judge. For my 2 cents, I'd have to say that Extraterrestrial Highway is one of the best albums of 2006 and it's a nice thing to be alerted of its existence. If ya dig a cosmic/punk/doom/experimental rock vibe caught somewhere in the middle of instro Black Flag, Hawkwind, 'Sabbath and the awesome guitar hysterics of Joe Baiza, it may just be up your alley.
Even better are the two discs by Yawning Man I received. Funnily enough, they've been around since 1986, though their virginal vinyl recordings, the Pothead 10" and Rock Formations LP only came out in the last year or two. Again, you can listen to some of their tuneage here. It is a rare day indeed when a contemporary rock band has me hitting "repeat" for days on end, though those rare days in question have comprised of the last week. The Rock Formations LP eschews any notions of stoner rock to hit a more vintage SST vibe a la Meat Puppets ca. II/Slovenly/Pell Mell/Universal Congress Of/Saccharine Trust or even, gulp, Lawndale. That is, there's a distinct "surf" thing happening here, though the guitar interplay is much more interesting than a standard surf-rock set-up (as much as I do like surf music, it is of limited appeal). Again, it's all instrumental and it has made driving around this fair city the last 7 days an absolute pleasure.

The Pothead 10" may just be my fave of the bunch, though that's hard to say. I mean, I really like these three releases A LOT. This one has 4 long-ish tracks with quite a different sound. The guitar has lost its twang and been caked in a sea of fuzz, w/ other keyboard and studio effects brought in to beef up the sound. In the space of the four songs provided, I'm reminded of: The Cramps, Cul de Sac, F/i, My Bloody Valentine, Husker Du (the experimental tracks from Zen Arcade), Can, Slovenly, Saint Vitus, Hawkwind, Guru Guru and about 5 other bands I really like. If you dig any of those bands just mentioned, you will want this in your collection. I feel like I have done the band no justice; I've barely scratched the surface. You really should hear it. I've just ordered the vinyl for all of the above from Missing Link. Perhaps you should do the same. Check out Alone Records in Spain for some/all of this stuff.
On another note, has anyone ever read the book, Spider Kiss, by renowned sci-fi author Harlan Ellison? I'm no sci-fi reader by any stretch, though I was given this by a friend who is. It sat next to my bed for a month before I finally picked it up and gave it a go a few nights ago. The friend in question knew I was no reader of sci-fi, but insisted it was a classic fictional rock 'n' roll novel originally published as Rockabilly in 1961. I am now 2/3rds of the way through it, and, bar it totally going off the rails and eating shit somewhere near the end, I can only say that it will have me captivated to the final page. Ellison, from all reports (inclusing his own!) is a rather legendary character in geek fiction over the last 50 years, having penned episodes for Twilight Zone, The Outer Limits and Star Trek, as well as myriad short stories and collections, though Spider Kiss is apparently a great anomoly in his canon.
Supposedly loosely based on Jerry Lee Lewis (though some would say Elvis), it follows the career of one "Stag Preston", the hottest and sexiest rock 'n' roll upstart to hit town since Elvis; one whose every move is attempting to be controlled by his management overlords, the Colonel Tom Parker-esque Colonel Jack Freeport and his sidekick, the novel's protagonist, Shelly Morgenstern. Preston is an evil, heartless, womanising, fist-fighting, hard-drinking little shit who nearly derails his career at every turn, but he's also a one-in-a-million talent who has the world in his hands. Spider Kiss is a hilariously cynical and perceptive look at '50s rock 'n' roll, even more so for the fact that it was originally published in 1961, a time when still few took "rock" as being any kind of "serious" music which would last the distance. Greil Marcus - yeah, that guy! - hails Spider Kiss in the introduction as perhaps the greatest "fictional" Elvis novel ever written. I can't vouch for the competition (and don't actually imagine Elvis being that bad a person. Maybe Jerry Lee...), but he's likely on the mark there, or near enough.
lexdev@yahoo.com.au
Posted by Dave at 12:56 AM No comments: Links to this post

Jesus, just how did I needlessly kill time prior to the internet entering my life? Did I used to read books or something?! Well, I'm still on a bit of an '80s Redd Kross kick right now, and so should you be, so check this wild video of the band playing at Santa Monica Pier ca. 1982. Cra-zee!

And if you're feeling really stupid, what about this atrocious GG Allin video? I'm still trying to work out whether it really is GG during a short-lived '80s hair-metal phase I'm not aware of, or an extremely well done parody. Any hints? My comments box has hit the skids again, so the email address is lexdev@yahoo.com.au
Posted by Dave at 3:20 AM No comments: Links to this post 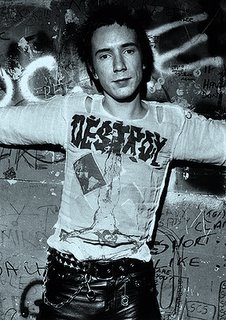 Hey! I finally found it: an actual list of what John Lydon played when he was on Tommy Vance's Capital Radio show on July 16th, 1977. According to Simon Reynolds, this was when punk (at least in the UK) withered and died and "post-punk" took over. Whatever. An interesting list, nonetheless, even more so for an alleged punker in mid '77.