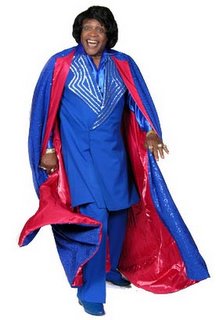 Ahem... merry Xmas and all that. A busy time of year and it's taken me until the 27th to get around to sitting in front of this computer to type something out. I'm off work until the 3rd, so I'll write something decent before I go back, but until then here's a pit stop. I have not much of anything planned for the week-and-a-bit off, though it looks like I could be one hell of a busy couch potato. The weather is unseasonably cool, the sky has actually dared to grace us w/ a few showers (note to foreigners: South-Eastern Australia is currently in the grips of its worst drought on record) and I have a ridiculous number of DVDs to watch: three seasons of Curb Your Enthusiasm, two series of Deadwood and the final season of Six Feet Under. Since I can purchase CDs dirt-cheap through various connections - or even get them free - all friends and family members have obviously decided that buying myself music for Xmas is off limits, which suits me fine. So, DVDs it will be. Oh, there was one more DVD Santa bought me for Xmas: Gigli. Thanks for that.

But anyway, as a quick space-fill, here is the absolutely, positively final round-up for the Best Of 2006:

Miami Vice (I didn't want to see it, and am sorry I did. An action-free action film: a whole new concept); The Departed (marginally pipped at the post by The Gangs Of New York as Scorcese's worst film yet)

AUSTRALIAN BAND OF THE YEAR:

Ummm... I can't say this one without the possibility of assault next time I enter various local establishments

Deadwood - hands down. As Leapin' Larry L noted: it's so good, you can't believe it's on television!

I don't waste my time reading bad blogs as I'd never leave the house otherwise. And don't expect me to put Blog To Comm in here, because in between the insults and tantrums I do actually find things of interest.

There ya go, that's my wrap-up for 2006. Perhaps I should get out more. Again, if I'm missing something, let me know. 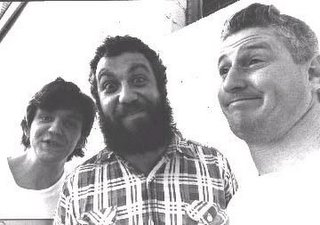 What's the verdict on fIREHOSE in the year 2006? When this, their debut, first came out, Forced Exposure mag raved about it, finishing its last paragraph w/ a line which went something like this: "fIREHOSE may just prove to become a better band than the Minutemen ever were". Or something to that effect. You think Byron's eating his words? Perhaps so, though fIREHOSE, contrary to what many may think, were not a band worthy of dismissal. The beefs people had w/ fIREHOSE were manyfold: it was Minutemen-lite; they'd lost the overt politics of their former band; the music was too collegiate; Ed fROMOHIO was a no-talent putz not worthy of licking Watt and Hurley's boots, and so on. All points containing a hint of validity, though I still beg to differ. Their debut, in particular, holds up nicely two decades after its initial release.

Many of the songs here were actually written by Watt and his wife (at the time) Kira for their duo-bass project Dos, and some of these did indeed wind up in slightly different form (well, it was just two basses) on their debut from the same year, so it's really the most Ed-less disc they ever released. More to the point, if there is any, would the Minutemen, had they survived and continued on, actually have sounded much different from this in 1986? At a guess, I'd say no.

The material here is the strongest the band ever recorded. Take a brief tour of their subsequent work: If'n was their weakest SST effort, a hodge-podge which sounded like approximately half-a-dozen not particularly great bands playing on one disc (though it still has its moments); fROMOHIO was a terrific, rootsy return to form; and then they jumped ship like so many others at the dawn of the '90s and signed to Sony, releasing Flyin' The Flannel then Mr. Machinery Operator in '93 before calling it quits. I never heard those records at the time. I jumped ship from all things SST in 1990, too, and tried to put it all out of my mind for a few years: a 3-4-year overdose hit me hard. Only many years later did I purchase the Sony CDs secondhand for a belated look into what ever happened to what was once my 3rd- or 4th-favourite band under the sun, to see where they went right or wrong, or at least to figure out why it was they never sold any records to speak of. My guess is they simply got lost in the rush at the time.

Ragin'... is a collection of hit-upon-hits. Straight-out Buzzcocksian power-pop ("Choose Any Memory"), Beefheartian funk ("Under the Influence of the Meat Puppets"), more rockin' material worthy of a Minutemen disc ("Chemical Wire") and even a few soppy ballads which don't stink. If anything, I'd compare the sound of Ragin'... to Meat Puppets ca. Out My Way/Mirage: caught in one of the last gasps before the label and many of its bands drifted into a musical no-man's-land. You know I'm biased, but the verdict is in: fIREHOSE coulda been contenders. By this stage, however, I figure that just about anyone and everyone reading this has already made their minds up regarding fIREHOSE. A yay or a nay?

Some people are starting to tire of my penmanship regarding 1st-, 2nd- and nth-rate SST bands of yesteryear. I have but one thing to say: too fuckin' bad You think I get paid for this? Nope, it's a hobby for my own amusement. And in that spirit, I'll inform you that the next issue of Perfect Sound Forever will feature an interview I did w/ Chuck Dukowski, so keep yer eyes peeled.

If you feel like commenting at all, you might want to hit "refresh" a few times and you'll notice the comments box will spring up. Either that or maybe nobody feels like talking!
Posted by Dave at 2:48 AM No comments: 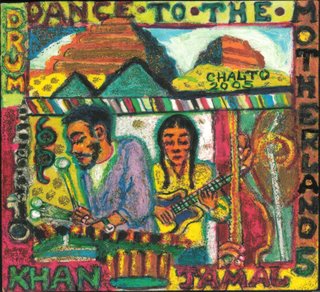 THE KHAN JAMAL CREATIVE ARTS ENSEMBLE - Drumdance to the Motherland CD (Eremite)
Certainly one of the best reissues of '06. The cover is a little deceptive, so don't let that put you off (Aquarius beautifully described it as looking like "some crappy new age CD you'd buy in an art gallery in New Mexico, while picking up some healing crystals"). This is in fact a first-time on-CD (or should I say, "first-time-out-of-Philadelphia") reissue of a hideously rare and much-sought-after LP from 1973, originally issued in a pressing of 300 copies and, I assume, sans cover (hence the garish-looking beast you are currently eyeballing).

The name Khan Jamal is not widely known outside of jazz-collector-dork circles - I only know him through a few other sideman appearances on Eremite - though he's obviously been kicking around for a while, and played w/ the likes of Sunny Murray and Byard Lancaster way back in the '60s, but anyway... Why is this release getting people like me all a-buzz out there? I guess you could say it's the constant "King Tubby-meets-Sun Ra" comparisons getting bandied about. Now that's enough to pique the interest of... well, just about any jazz-collector-dork you may care to mention, which puts me fair and square in the purchasing demographic.

Jamal plays vibraphone in a quintet setting here, recorded live at the Catacombs Club, Philadelphia, October 6 or 7 (no-one knows), 1972. Accompanied by glockenspiel, marimba, guitar and Fender bass, the first track, "Cosmic Echoes" has strong tones of Jewels Of Thought/Deaf Dumb & Blind-period Pharoah Sanders running through it, with a sea of clattering percussion and squawling reeds, though what sets the bulk of the album apart from other "cosmic jazz" releases of its day is the plain weird and other-worldly dub production its caked in. Everything echoes, sounding, as has been noted time and time again, like King Tubby or Lee Perry controlling the decks at a mid-'60s Sun Ra recording. Or Joe Meek producing Pharoah Sanders in a cave. Or Syd Barrett leading the Arkestra w/ Conny Plank at the helm. Ladies, I could do this aaall night, but I'll spare you the lazy comparisons. This is a gem uncovered, dusted off and available to you for a reasonable price. Couldn't ask for more than that!

Speaking of reasonable prices, check out this sucka on ebay. As I write this right now, the Velvet Underground acetate disc I speak of is hovering at just over the US$128,000 mark. My mother always had a saying about a fool and his money, but I'll spare the sermonising.
Posted by Dave at 1:56 AM No comments:
Newer Posts Older Posts Home
Subscribe to: Posts (Atom)