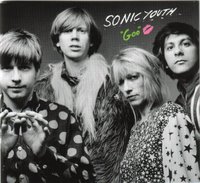 SONIC Youth - Goo deluxe edition 2CD (Universal/EU)
Bought this a few months ago and barely even gave it a decent spin until last week. Why the purchase? I can only assume that Universal - either in Europe or Australia - is currently sitting on a warehouse full of these "deluxe editions", coz they're now flogging them off dirt cheap. In fact, they're roughly half the price at the moment, and there's some good-to-great titles in the series, too: Marvin Gaye, Coltrane, Who, Cream, etc. Lo and behold, there's even some Elton John and Eric Clapton in there, if you're feeling in a particularly masochistic mood. But anyway, what brought on the sudden spurt of airtime for Goo? Well, other than the fact that one should obviously bother listening to the music they spend their hard-earned cash on, it was also spurred on by hearing "Dirty Boots" on the Tote (local music establishment frequented by Melbourne's landed gentry and high society) jukebox last week. Fleeing the band-room in horror w/ a compadre after witnessing yet another musical atrocity, we hugged the bar in stunned silence for a minute then turned to each other in perfect unison and stated in awe, Man, how good does this sound in comparison?! It rocks! Yes indeed, time to listen to that Goo 2CD gathering dust next to the stereo...

I hated Goo when it first came out in 1990. At the time I had been a bonafide SY fanboy for a good 3 years. I bought Sister the week it came out (it was licensed locally to Au-go-go at the time), screen-printed "Sonic Youth" on the front of my grey hoodie and figured I was just about the coolest cat in North Balwyn. Well, let's face it, I was probably was, but that's not the point. Skip to 1990, and I was an insufferable twit w/ my head up my anus knee-deep in that special brand of midwestern asshole/noise-rock a la Die Kreuzen/Killdozer/Laughing Hyenas which was all the rage at the time. Goo hit the racks and I recoiled in horror. Had my once-favourite band just been permanently sissified for the purpose of general consumption? My response was a big YES. Firstly, they'd sold their soul to Geffen (back in the Us Vs. Them days, a big no-no); secondly, they'd released "Kool Thing" as a single, what still stands as possibly the worst song SY has ever written (and their pee-thetic breaking-bread-with-the-homies move of including Chuck D. in the mix struck me as beneath contempt); and thirdly, what the hell was w/ all those day-glo fashion shoots the band was splashing over every glossy mag in town? Were SY being "sexed-up" by The Man in an attempt to appeal to The Kids? Sheez, SY are goddamn bookworms, dorks, collectors, aesthetes, not pin-up material. I threw in the towel and wrote 'em off like a bad debt. Time to find a new favourite band.

So, it's 2006, and how does Goo stand up? Disc one here includes the album in full. Outside of "Kool Thing" (sorry, I still don't like it; if you're looking for why SY-detractors label them as smug and contrived, look no further than this song), it holds up really well, and only now is my mid-'30s brain starting to understand the concept of why it seemed like everyone else on earth - except for me - went so apeshit over it at the time. Maybe I should've listened to the thing. Firstly, this is by no means any kind of departure, musically speaking, from their universally lauded Daydream Nation meisterwerk of '88. As Byron Coley's liner notes tell the story, the vast bulk of the album was actually written right after Daydream Nation when the band didn't even have a record contract, so I can only assume that Geffen bean-counters weren't hanging over their shoulders at the time trying to mould a "hit" (perhaps not through lack of trying, though). Then you've got the individual songs in question: "Dirty Boots", "Tunic (Song For Karen)", "Mote", "Titanium Expose", all as good as Sonic Youth are ever going to get when attempting to write some sort of "pop" tune. I could take or leave a few of the shorter tracks, especially the likes of "My Friend Goo" and "Mildred Pierce", in which they attempt to "punk out". Still, the hit/dud ratio is in their favour. I'm backflipping on the words I spilt as an angry 18-year-old: Goo is an honest-to-goodness fine rock 'n' roll album.

This is also well worth getting if only for all the bonus material. Disc 2 contains a wealth of 8-track demos which, perhaps predictably, sound better than the finished product. Devoid of any studio gloss, the dual-guitar interplay from Moore and Ranaldo sounds more Ginn/Cadena than, say, Verlaine/Lloyd or Reed/Morrison. The elastic spasticity (whooaah!) and spikiness of the solos really shine through, rocking it harder than the relatively shiny-sounding album which hit the stores at the time. There's also a bunch of B-sides, demos, out-takes and even a piece of promo nonsense included in an issue of Sassy mag at the time which you'll probably never listen to all the way through, but given its current price, the album itself, the hot-hot-hot demos, the always-informative and witty Coley liner notes and the all-round swishness of the package - candy-assed photos included - it's certainly a sound investment for the discerning consumer. Purchase at will!
Posted by Dave at 1:55 AM

How can you say Kool Thing is their worst song ever when My Friend Goo is looming only two tracks away?

My friend Goo
She says P.U.